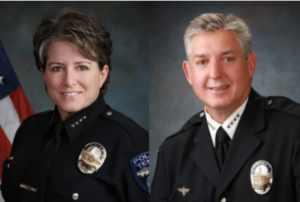 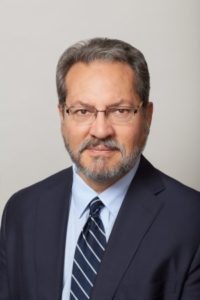 Search Tom Ryff with no quotes in all search engines besides Google – DuckDuckGo, Yahoo!, Bing, Startpage, etc. The first result is ALWAYS tempepolicecloset.net. Google lowered TempePoliceCloset and all Operation-Nation content related to Ryff to page two of its search engine results pages. This is also why you should NEVER use Google for real research unless it’s for corporate or state-run media goals. It is inherently biased towards government and corporate agendas.

Props to Stephen Montoya though. These Phoenix-area lawyers know their stuff when it comes to defending malfeasant thug cops. We interviewed Craig Mehrens, attorney for killer cop Richard Chrisman, in 2013. I don’t like him. But I respect his game. We get it. Montoya is trying hard to save his pervert client’s bag. Must give credit where credit is due. Montoya obviously has Google connections. But it’s unlikely to matter. The evidence against Ryff is pretty damning.

Keep following TempePoliceCloset and the Maricopa County Court website for updates on the Ryff lawsuit.

The video starts where Mayor Mark Mitchell says they are removing item 5(A)(3) from the agenda. That is the vote on Tom Ryff’s $150,000 settlement.

Props to Vice Mayor Lauren Kuby. She responded to my email and asked for further elaboration on precedent related to non-disparagement agreements and how the Arizona and federal courts interpret them.

The action by Tempe City Council last night was effectively a punt. Who knows what happens from here. But it’s better than succumbing to Ryff and lawyer Stephen Montoya’s money grab. The latter likely gets a portion of the settlement. Ryff, at some point, has to answer to the taxpayers who have enriched him to the tune of $4 million-plus during his career.

This is about principle. Frankly this is an easy case in Tempe’s favor. I love the gamesmanship. Let’s party!

TEMPE — Former Tempe Police Chief Tom Ryff is set to receive a $150,000 settlement from a lawsuit filed in 2017. The lawsuit claims that current Tempe top cop Sylvia Moir and other city employees made “disparaging remarks” about Ryff. The sticks-and-stones allegedly violated a “non-disparagement” agreement when Ryff retired in 2015. The lawsuit alleges that Ryff lost a $109,000 per year job with the Tempe Union High School District (TUHSD) because of the remarks.

The first affirmative defense in defamation, libel and/or slander cases is the truth. The 1964 U.S. Supreme Court decision in New York Times Co. vs. Sullivan also created the “actual malice” test. Plaintiffs must prove that defendants “knowing[ly] or reckless[ly] disregarded [the truth]” to survive the demurrer stage in defamation cases.

Moir simply told the TUHSD that hiring Ryff would make many city officials “uncomfortable.” She also said it would be a negative development overall for city morale. But Ryff’s feelings and his pocketbook were hurt by the truth.

Here is a short list of truth about Ryff and Tempe police under his leadership.

Again this is just a short list. Visit TempePoliceCloset.net for more.

All Moir did was tell the truth. There was no malice in what she said. Granted those “non-disparagement” agreements use slick language crafted by high-priced lawyers. But the City of Tempe, home of my alma mater Arizona State University (Go Devils!) once again let Ryff off the hook.

Andrew Ching – hit me up

Tempe lawyers said in their answer to Ryff’s lawsuit that he cannot be disparaged simply by them repeating well-known truth. The city’s legal team mentioned Operation-Nation specifically. They said a simple Google search reveals documented truth about Ryff in the first few results searching just his name. 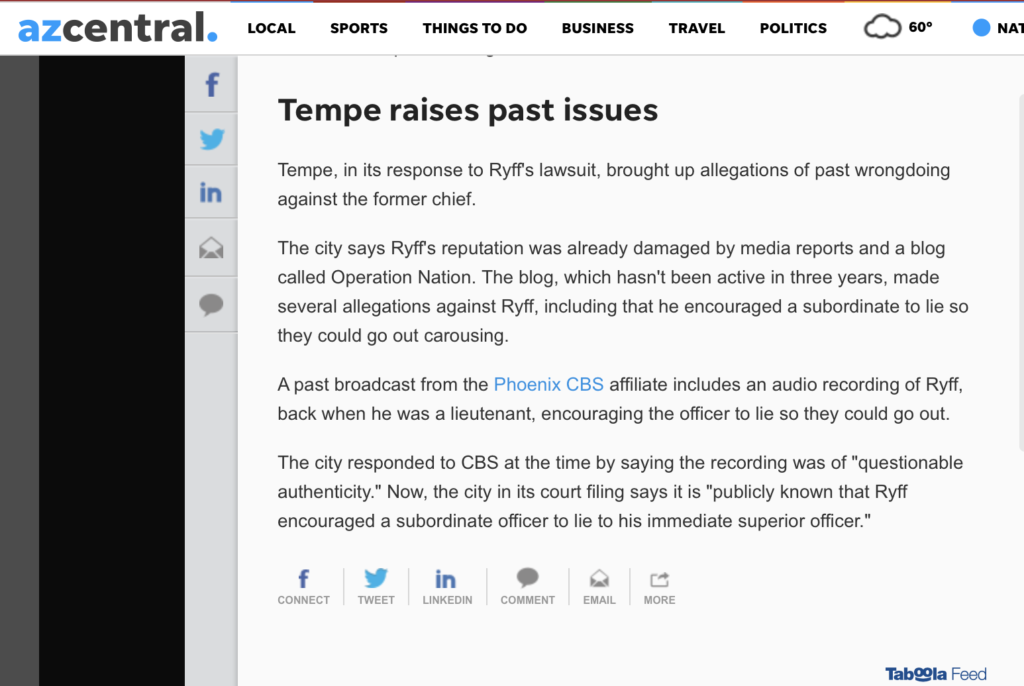 Phoenix New Times staff writer Meg O’Connor was first to report that Tempe City Council will vote on the $150,000 settlement this Thursday, December 12. City Manager Andrew Ching, who has seemingly been there forever, conditionally approved the payment on October 30.

Former Tempe cops and other city employees used to call Ryff “Teflon Tom.” He consistently got away with sophomoric malfeasance throughout his tenure. I would gladly testify in a potential trial or give a deposition if Tempe officials choose to go that route. The city cited my work in their answer to Ryff’s lawsuit. Why not take it a step further? I’m not scared of Coolo cop Ryff like Tempe employees. We have a simple contact form right here on this site if you need it.

Ryff is a lying, manipulative sociopath who enriched himself over 35 years off Tempe taxpayers. He will now get the last word and forever taint the city’s integrity. Taxpayers have given him about $4 million in salary and benefits in the last 25 years alone. The least Tempe officials could do is make this guy face all his demons in a court room via trial. Unfortunately Ryff castrated the city long ago and still has Tempe’s spine hanging over his fireplace.