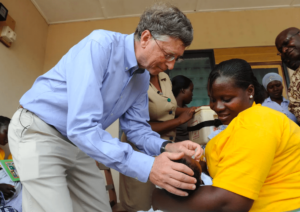 So it begins. We covered the two white imperial doctors fetishizing their demented desire to use African children as guinea pigs for vaccines. The director-general of the World Health Organization (WHO) strongly condemned the comments, saying this would not happen. But apparently he isn’t as powerful as he believes.

Seven children died this week after being given experimental vaccines in Senegal, according to a report by the website ezone57.com. The website appears to be Ghana-based. The story has since been removed from the site and, somehow, removed from web archives as well.

The people in charge of the vaccine program were reportedly arrested by the Gendarmerie (State Police) or one of the ten regional police forces.  No other information is available. We attempted calling the phone number on the Gendamerie website, but got no answer as of publishing. There doesn’t appear to be a way to contact Senegal police via email.

A video originally uploaded to Youtube lends more credence to the story. A user named Aggie’s Fam posted a 13-minute video on April 6. She appears to be from Nigeria. The video confirmed the story of seven kids being killed. But she described them as “infants.” This paraphrased quote starts at about the 1:50 mark.

“I really don’t know what’s wrong with our African leaders. Today, a nurse told my husband that seven infants have died in Senegal due to this coronavirus vaccine. I just don’t get it, why you must collect this thing when you know that it’s not being tested? You want to use your people as guinea pigs. Lab rats? Because of what? Do they give you money to kill? If you kill all your people in your land, who will remain for you govern? You will end up going to the ground like you end up falling like zero level. What is your problem? Oh my god, this is stupid.”

We quickly downloaded the video knowing Youtube would likely remove it. Sure enough, the video was removed minutes after we got a copy and re-uploaded it to Vimeo.

UPDATE April 13, 2020 – Vimeo has now removed the video as well, and our entire channel. We have re-uploaded to Bitchute.

We only had 3-4 videos on there anyway. Now they keep sending us emails like we give a damn to “appeal” to their minor league platform. Here is the email we got from Vimeo:

Reason: You cannot upload videos that depict or encourage self-harm, falsely claim that mass tragedies are hoaxes, or perpetuate false or misleading claims about vaccine safety.

Aggie’s video had over 42,000 views before removal, by far the most views of any video on her channel. We also took a screenshot of her channel. It’s not out of the question for Youtube to remove her altogether. 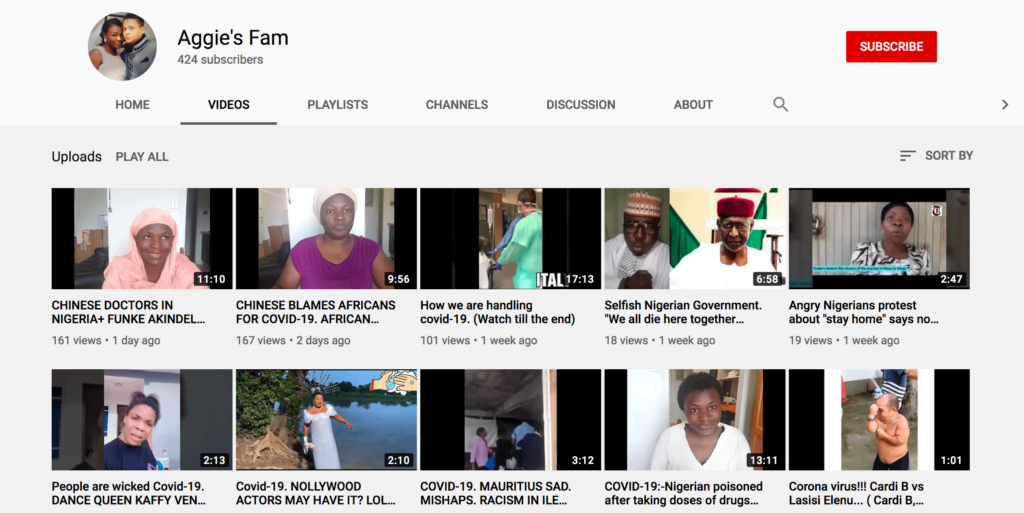 UPDATE 1:45 p.m. Pacific – We contacted the woman who posted the video. She said she never expected it to get the attention it has. She appealed the deletion of her video to Youtube to no avail. Aggie said she has mixed feelings about the video now that it has gone viral. But she also wants the truth to be known. “I am scared. Because it’s too much for me and my husband, he don’t want that,” she said.

These incidents are likely to pick up steam across the Continent. Ghana President Nana Akufo-Addo announced that the country received $100 million from the World Bank last month. The funds are for “fighting coronavirus.” One of the apparent strings attached is allowing Bill Gates and his imperial doctors to experiment on children in the country.

Other African nations are resisting imperial medicine. Protestors in the Ivory Coast destroyed a coronavirus testing center this past Sunday. They believed the facility housed coronavirus patients. They did not want the diseases spreading through the city of Abidjan. Police used tear gas to disburse the crowd. But the damage was already done to the facility. Abidjan has been locked down since March 23. Ivory Coast has only 323 confirmed cases of coronavirus.

It’s no wonder the Euro-Zionist empire hates the Kennedy family so much. They killed President John F. Kennedy and his brother Robert F. Kennedy. Maeve Kennedy Townsend McKean was found dead in Charles County, Maryland this week after an alleged canoeing accident. Her 8-year-old son Gideon McKean is still missing. Maeve McKean is the daughter of former Maryland Lt. Gov. Kathleen Kennedy Townsend. She is one of RFK’s 11 children. Now RFK, Jr. needs to be careful.

RFK, Jr. posted a lengthy story on Instagram a couple days ago. Bill Gates is obsessed with vaccines due to a “messianic conviction that he is ordained to save the world with technology and a god-like willingness to experiment with the lives of lesser humans,” said RFK, Jr. Gates essentially purchased India’s National Advisory Board (NAB) for $1.2 billion in 2000. His first mandate was giving all Indian children 50 polio vaccines each. The vaccines caused paralysis in 496,000 children from 2000-2017, according to RFK, Jr.

“The Gates Foundation funded a trial of a [GlaxoSmithKline] experimental malaria vaccine, killing 151 African infants and causing serious adverse effects including paralysis, seizure, and febrile convulsions to 1,048 of the 5,049 children,” RFK, Jr. wrote. He didn’t stop there.

In 2017, the World Health Organization reluctantly admitted that the global polio explosion is predominantly vaccine strain, meaning it is coming from Gates’ Vaccine Program. The most frightening epidemics in Congo, the Philippines, and Afghanistan are all linked to Gates’ vaccines. By 2018, ¾ of global polio cases were from Gates’ vaccines. A 2017 study (Morgensen et.Al.2017) showed that WHO’s popular DTP is killing more African than the disease it pretends to prevent. Vaccinated girls suffered 10x the death rate of unvaccinated children. Gates and the WHO refused to recall the lethal vaccine which WHO forces upon millions of African children annually.

Gates has given at least $10 billion to the WHO since 2010. He’s the largest donor to the organization other than the U.S. government. Gates essentially owns the WHO and calls all the shots (no pun intended).

*UPDATE 3:45 a.m. Pacific: Agence France-Presse (AFP) writer Anne-Sophie Faivre Le Cadre says in a “fact check” story that Senegalese children “did not die.” The story was published shortly after our story went live. It talks about some video on Facebook that has nothing to do with our story.

The AFP reporter cited an unnamed spokeswoman for Senegal’s health ministry as a source. The reporter says no vaccine exists, despite patent documents being readily-available online. This declaration, and the anonymous spokeswoman, further discredit the French media response. A French-speaking Senegalese spokeswoman using the term “fake news” is also suspect.

Mainstream media are strictly on code right now, controlling the entire COVID-19 and 5G narratives. It’s up to readers to think critically. We firmly and unequivocally stand behind our story.