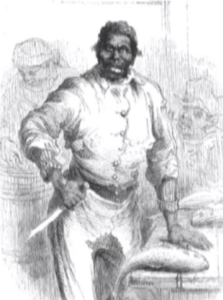 White imperialist Thomas McCargo and the Johnson and Eperson Company were transporting 135 enslaved Afrikans from Virginia to New Orleans aboard the Creole in November 1841. One of the ancestors onboard was Madison Washington. He escaped imperial slavery and fled to Canada a year earlier. But Washington returned to Virginia in search of his wife. He was re-captured, placed on the Creole, and was on his way to perpetual slavery. Brother Washington’s fighting spirit wasn’t having it.

Washington led 18 other brothers on an all-out mutiny aboard the ship. They killed at least one white imperialist and overwhelmed the rest of them, including Captain Robert Ensor. We suffered one casualty. One of our warriors died from a gunshot wound. Washington gave the navigator two choices – take them to Liberia or be thrown overboard. The navigator said the trip was too far. Ben Blacksmen, another brother, remembered a story about a place called the Bahamas. The navigator said he could take them there.

They arrived in Nassau sometime in late November 1841. Free black folks working at the port greeted the brothers and sisters. One hundred seventeen (117) ancestors onboard were immediately freed and told to live happily ever after in the Bahamas. Our 17 soldiers were arrested. But five months later, April 16, 1842, a Nassau Court ordered them freed. They lived happily ever after in the Bahamas.

The Creole Rebellion is technically the most successful freedom fight in U.S. Maafa history since so many of us were freed. But the story did not have a completely happy ending. Three enslaved women voluntarily went back to New Orleans with the white imperialists. They chose slavery. Their children (one boy, one girl) went with them. It’s a sad reminder that coonery is real and DEEPLY ingrained. But our innate fighting spirit is as well.

HAPPY THANKSGIVING to all the brothers and sisters who freed themselves aboard the Creole 177 years ago.

One thought on “Thanksgiving Freedom: The Creole Rebellion of 1841”