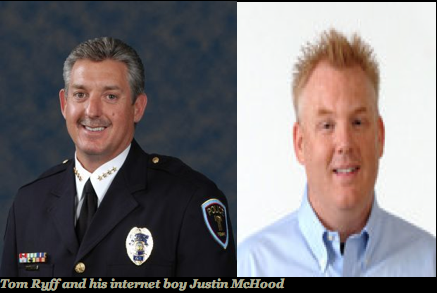 A story was published on the Phoenix New Times website on September 12 entitled “Penile Hubris and Meth to Blame For Alleged Tempe Kid-Lurer Joseph Larosa’s Sexual Advances Towards Children?” The story is basically about a pedophile who was arrested for asking little girls if they wanted to see his penis. One of the comments left in the story’s forum by someone named “Seanscloset” includes the email address of Ms. Eleanor Holguin’s son, Sean.

As you may recall, Holguin, a longtime Tempe resident, has been very vocal about Ryff and his malfeasant acts as police chief. The comment left by “Seancloset” is an apparent attempt to insinuate Holguin’s son would be interested in contacting the pedophile in the story. Ms. Holguin immediately responded, as seen above.

“I haven’t done anything at all besides show up at [city] council and I made sure they saw me and I left. This is weird,” Holguin said via email. She confirmed that her son had been with her the entire time the comment was left, thus it definitely was not him who left the comment. So if not him, than who?

“My guess, Cobbs, Ryff and McHood,” Holguin said. Charles Cobbs is an assistant police chief for Ryff. Ryff and his subordinates have been harrassing Ms. Holguin continually since her intial complaints to Tempe City Council. Justin McHood is the webmaster for all the new Tom Ryff websites and presences on the internet which have all popped up in the past 9 months.

McHood, who is not a City of Tempe employee,  but is in the police department almost daily as Ryff’s internet cop, also created the website eleanorholguin.com. The website, which depicted Ms. Holguin as some kind of child molesting drug addict, went online February 24, 2011, one day after she spoke in front of Tempe City Council. Ms. Holguin filed a police report on March 7, 2011, naming Ryff and McHood as suspects in creating the website and sending her harrassing emails. The website was taken down the following day.

Now it appears Ms. Holguin has reasonable grounds to file yet another police report. She cited Arizona’s computer tampering law (A.R.S. 13-2316) in the March police report. She can not only use the aforementioned law in the instant case, but also the criminal impersonation statute (A.R.S. 13-2006) which state, “[A] person commits criminal impersonation by…assuming a false identity with the intent to defraud another.”

McHood and Ryff have not only assumed a false identity (pretending to be Ms. Holguin’s son), but also insinuated a sexual solicitation to a pedophile in the name of Ms. Holguin’s son. This time, however, she should also approach the State Attorney General and/or the Maricopa County Attorney. Holguin should also file charges with the Tempe Police Department. It wouldn’t hurt to contact the United States Attorney in Arizona also, as there is probable cause that Ryff and McHood violated federal criminal civil rights statutes, pursuant to Title 18, U.S.C., Sections 241 and 242.

Whether federal or state charges are potentially pursued, both carry prison sentences if Ryff and McHood are found guilty.

We will update this story if any further developments come about.