The lawsuit, filed in April, alleges the Tempe Police have policies, customs, and practices of race-based arrests and falsifying police reports, perpetuated by Tempe Police Chief Tom Ryff, and violated Wilkins’ civil rights when they arrested him on July 22, 2008. Wilkins was arrested after his then-neighbor, Michael Arthur Wood, attacked Wilkins in his apartment at knife-point, according to the complaint. Wood also extorted Wilkins for “$1000.” Wilkins fired his pistol in the air to scare off the attacker and was subsequently charged by the Tempe Police, specifically Officers Mike Wallace and Travis Johnson, with aggravated assault with a deadly weapon, three counts of misconduct involving a weapon, and several other felonies.

Wilkins subsequently spent nearly two months in the Maricopa County Jail while being held on a $54,000 bond. The lawsuit also alleges selective enforcement of the law. Wilkins alleges he was charged with several felonies for protecting himself on his own property, while “similarly situated” “white” Arizonans, particularly Steve Saridakis, have not been charged with murder or any other crimes for protecting themselves with deadly force in their own property. 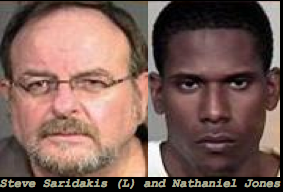 Saridakis was not charged with any crimes when he fired a gun several times at Nathaniel Jones, who is “black,” after Jones broke into Saridakis’ Tempe gun store. Jones was arrested and charged with several felonies. Arizona statutes have several “self-defense” and “necessity” clauses for citizens to defend their property and person from harm. Wood, the State of Arizona’s alleged victim, is “white.”

The suit further alleges defamation of character, intentional infliction of emotional distress, and failure to train. The suit seeks more than $15,000,000 in damages.

Meanwhile, Wilkins has also filed a federal claim, pro se, against Maricopa County and Sheriff Joe Arpaio, alleging Eighth Amendment cruel and unusual punishment violations while he was incarcerated as a pre-trial, non-convicted inmate. Wilkins is also currently appealing, pro se,  via Rule 32 Post Conviction Relief proceedings, the plea agreement he says he was “forced to sign.” Maricopa County Superior Court judges will now decide whether to hold an evidentiary hearing, and/or dismiss the “appeal.”

One thought on “City of Tempe, Police’s Motion To Dismiss Wilkins Federal Lawsuit Is Denied”