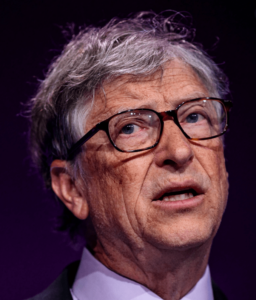 The great JFK opposed nuclear weapons in Israel. He also signed Executive Order 11110, authorizing the U.S. Treasury to print debt-free currency in lieu of the Federal Reserve. JFK was assassinated on November 22, 1963 for loudly opposing that “monolithic and ruthless conspiracy.”

Those same evil entities exist today. But the face of it all is a demonic weasel with enough money and power to buy and sell the entire human population. Bill Gates recently confirmed his ID2020 wet dreams, wanting a “digital certificate” implanted in all human beings.

He said it again in a recent “Ask Me Anything” session on Reddit.

Now his company has laid the groundwork for that to happen.

The United States Patent and Trademark Office (USPTO) recognizes patents filed with WIPO. Thus it was likely more efficient for Microsoft to file the patent with WIPO versus USPTO.

The abstract for this body activity data system is perhaps the most open, blatant evil since American slavery.

Emphasis and footnotes were added throughout. On the surface, it sounds like your smartphone will simply detect that you’ve done something the government tells you to do. If you obey, you are rewarded with some new cryptocurrency and your “certificate” stays active. But let’s break down each footnote.

Breaking down the abstract 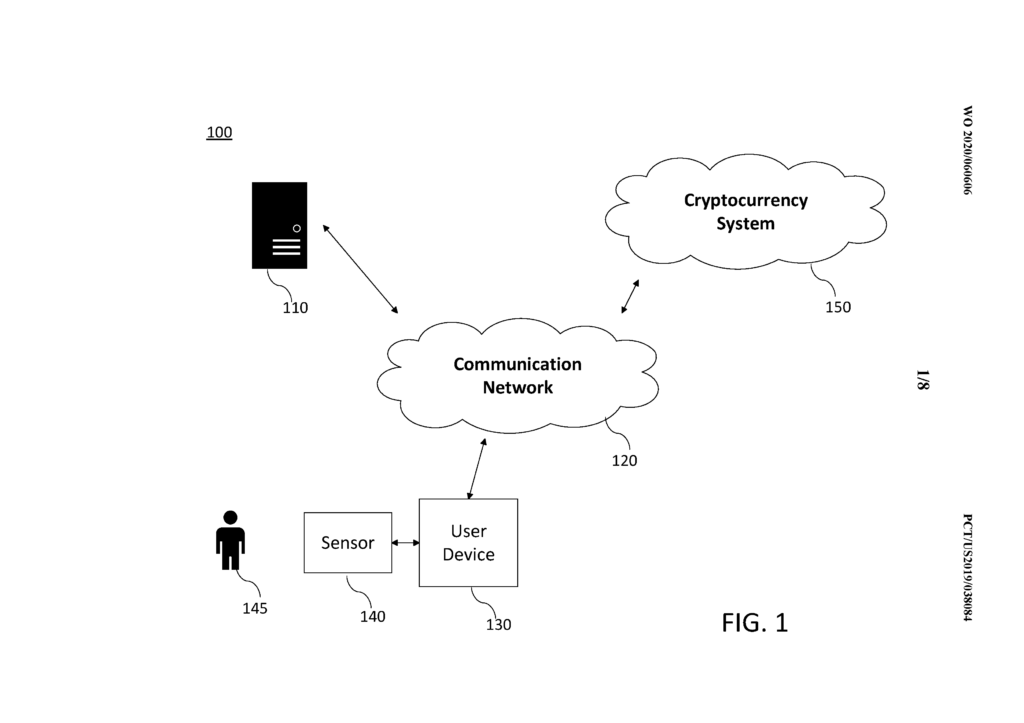 1. Human body activity associated with a task provided to a user. This has coronavirus and COVID-19 vaccines written all over it. An LX/Morning Consult survey taken from March 24-25 found that 75% of Americans would willingly take a coronavirus vaccine at some point once it passes clinical trials.

UPDATE April 20, 2020: This is at least the fifth doctor/respiratory technician I’ve seen come out and essentially call coronavirus a false flag. Click on the coronavirus category to see more of our coverage. People just WANT to believe this agenda. It’s like a 9/11 re-run.

UPDATE April 29, 2020: Youtube removed this video, so we re-uploaded to Bitchute.

Antigens (foreign substances/devices in vaccines) are not directly mentioned in the instant patent application and description. But with such a willing population, anything can be placed in potential vaccines without much independent, objective oversight. Furthermore, the VeriChip implant manufactured by Applied Digital Solutions (now Digital Angel Corp.) was approved by the FDA in 2004. VeriChip and Digital Angel have been Microsoft partners since 2008.

RELATED: Gates Foundation calls for global cooperation to vaccinate all 7 billion people on the planet (April 15, 2020)

These sensors must detect that you’ve had a coronavirus vaccine or completed some other “task.” It must have some way to communicate with physiological functionalities. The sensors and server know every function in your body, from blood flow to brain waves, according to the documents. 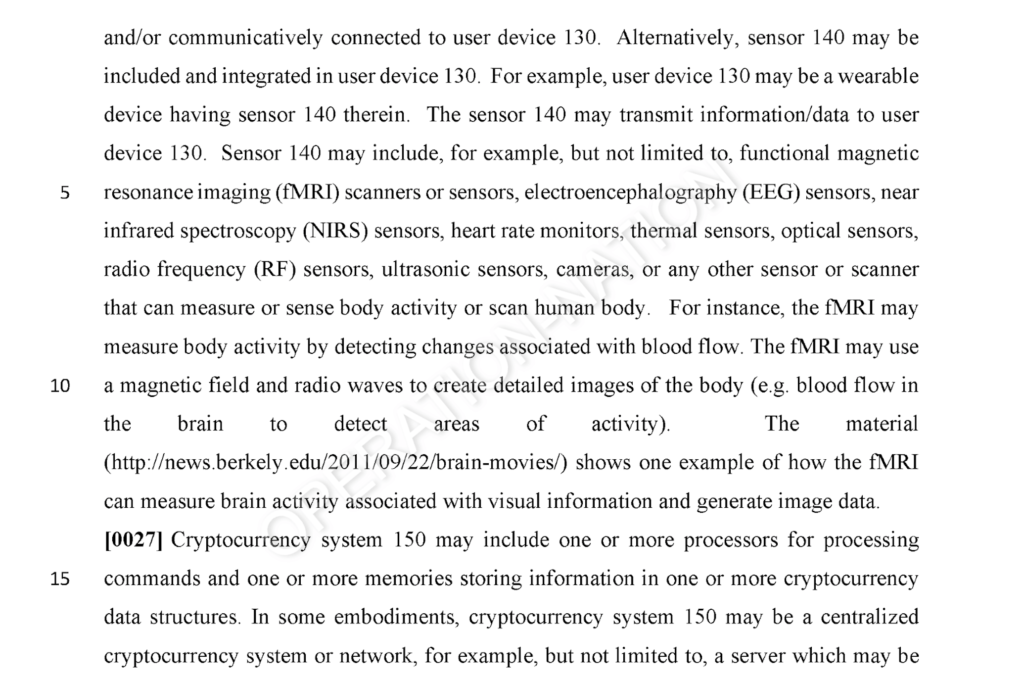 The sensors can even read your thoughts and report them back to the central server. 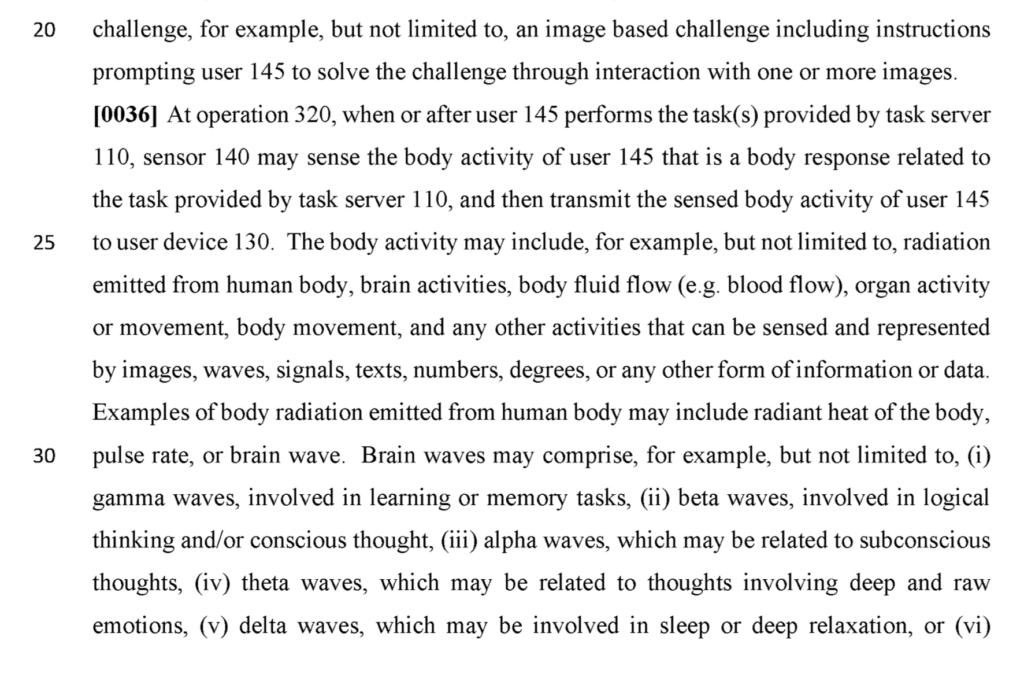 RELATED: Facebook is building tech to read your mind. The ethical implications are staggering. (August 5, 2019)

The only technology capable of reading minds requires electrodes implanted in, on or near the brain.

Facebook and University of California San Francisco researchers are developing non-invasive, wearable technology that allows people to type on a computer simply by thinking about it. It uses near-infrared light, like a functional MRI but with a wearable, portable device. This new Microsoft patent needs something inside or on the surface of the human body to do what it claims to do.

In the body activity data patent, a server is “communicatively coupled” to the human being either through an external device (e.g. smartphone) or some sort of antigen. This new patent claims to know how your internal organs are functioning. Something must be connected to you or implanted in you to do that. Smart socks, for instance, measure pressure on your feet when you’re jogging or walking. The data are shared with your smartphone or other device. But the data are only collected when you are wearing the socks.

4. may verify if the body activity data satisfies one or more conditions set by the cryptocurrency system, (5)and award cryptocurrency to the user whose body activity data is verified. This point suggests that paper currency is being phased out of society. It makes sense. Hyperinflation is inevitable due to the $5.6 trillion the Federal Reserve printed out of thin air in the last six weeks. The “petrodollar” collapse appears imminent.

The body activity data server determines if the human being is obeying whatever orders they are given (e.g. get your coronavirus vaccine). If the server detects the vaccine antigen or whatever coupling, you receive your digital currency as a reward. If not, you don’t get paid. This feature can hypothetically be used on a broader scale. Many U.S. small businesses are shuttering due to these nationwide lockdowns and will not be able to recover. Thus most Americans must work for corporations or not at all when the economy reopens.

Corporations can adopt this body activity data system for payroll. Large corporate grocery stores (Walmart, Target, etc.) will only accept this new Microsoft cryptocurrency. Those who do not obey all dystopian laws cannot get paid, cannot feed themselves, cannot travel, etc. Cash will no longer be accepted. Digital currency will be the only option.

Those familiar with Bitcoin, Litecoin and other cryptocurrencies are familiar with blockchain technology. Every transaction with Bitcoin is done on a public, decentralized ledger that anyone can observe at anytime. Nothing can be erased or changed. The anonymity aspect comes from the 26-35 alphanumeric characters that make up Bitcoin mainnet addresses (identifiers). All users have a private key which is 32 bytes (64 numeric characters).

The technical aspects of blockchain, including anonymity, won’t matter in a corporate/government-controlled network. Private keys will likely be assigned and recorded by Microsoft. Economists have speculated for years that paper currency will be completely eliminated from society. Some thought it would happen after the 2008 crash. So-called “conspiracy theorists” have known for a long time the powers-that-be want this “new world order” with one government, one currency and no individual freedoms.

This Bill Gates “body activity data” system ensures you cannot buy anything, sell anything, travel, work, or even exist without full compliance to all government directives. This technology monitors every physiological function – thoughts, feelings, movements, etc. It also controls micro and macroeconomics.

The whole coronavirus agenda is eerily similar to how the Federal Reserve came into existence in 1913. It had an initial 20-year charter that was extended in perpetuity via the 1927 McFadden Act. A small group of bankers (Lazards, Warburgs, Rockefellers, and Rothschilds et al.) and their descendants have since controlled the entire monetary system. Bill Gates understands the dollar will collapse. He’s making his case to replace the dollar and become Rothschild 2020.

Humanity will essentially be a remote-controlled toy colony for the powers-that-be once this technology is implemented. Again, most Americans will voluntarily go along with this, making implementation seamless for governments here and around the world.

UPDATE April 21, 2020 – Bill Gates speaking to the Financial Times: “You don’t have a choice. Normalcy only returns when we’ve vaccinated the entire global population.”

Coronavirus vaccines were patented in 2018 and 2019 by Gates-funded Pirbright Institute. The documents are readily-available. But cognitive dissonance prevents most Americans from even looking at them. The charade of “vaccine race” is simply a state-run media distraction, a subterfuge to reinforce the program.

Gates is now the top funder of the World Health Organization after Donald Trump cut U.S. funding. That means he’s calling all the shots (no pun intended) worldwide with these vaccine programs. Vigilance is more important than ever for the people of Earth.