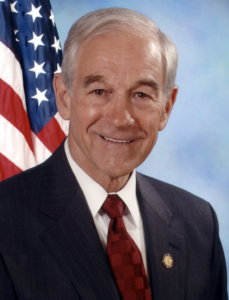 There are many things to like about Republican Presidential candidate Ron Paul. He wants to abolish the IRS and Federal Reserve. He is anti-war, anti-world military occupation and pro-liberty. Paul wants to end the “war on drugs” and private prisons.

Paul introduced the Industrial Hemp Farming Act of 2011. It would legalize farming and growing one of the most versatile and useful plants on the planet. He refuses to enroll in the Congressional medical entitlement program that gives all former and current Congress people lifetime, premium medical coverage. He’s also very likable, a rarity among Republicans nowadays. You also never hear him fearmongering about Muslims.

There are some legitimate red flags with the 12-term Congressman. Dr. Paul supports the Bush tax cuts for the richest Americans. He is also known as the “intellectual godfather” of so-called “tea party Republicans.” Paul is closely aligned with several of said individuals who held the entire country hostage with a conjured debt ceiling crisis. This same G.O.Tea Party wants to increase taxes on the poorest Americans by January 1, 2012.

Congressman Paul is getting the attention of many independent voters. State-run media can no longer ignore him like a giant invisible pink elephant at the podium. Paul announced he will not run for re-election to the House in order to concentrate on his Presidential bid. But three things must happen for Congressman Paul to become President Paul on January 20, 2013.

Ron Paul cannot become President unless he’s nominated by Republican voters. A vast majority of that group are European American. Paul’s voting base is a fanatical group, similar to 2008 Obama voters. Paul can do no wrong to his most ardent supporters. The base needs to expand to Paul to have a chance.

White American households will always (without revolution) have far more net worth than black and Latino households. But even the net wealth of that group dropped during the Bush years. The declined has continued during the Obama Administration. 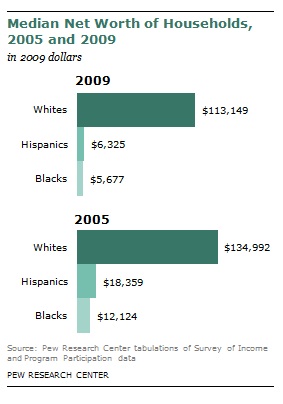 It is safe to assume that the median white household wealth is closer to $103,000 in 2011. Tea Party Congressional Republicans want the one year, two percent tax break President Obama gave the poorest Americans via FICA (social security) payroll taxes to expire. The tax rate would increase from 4.2 percent of the first $106,800 families earn, to 6.2 percent. That’s a $2,135 yearly tax increase on working white Americans in the $100,000 tax bracket.

Sheep white voters support the tea party regardless. The tea party forced our feeble President to extend the Bush tax cuts. This kept the richest one percent’s federal tax rate at 35 percent, instead of returning it to the 39 percent rate before Bush. “Wealthfare” increases the federal deficit. Poor white voters support tax cuts for the rich and free health care for their Congress people. Meanwhile they don’t support the same for themselves. It makes absolutely no sense.

Unemployed white voters and other poor white voters also support warmongers unconditionally. Many white voters simply choose the Republican who says the most derogatory things about Obama and black people in general. They also eat up Muslims and Mexicans hatred. Obama hatred and sheep mentality leads to another corporate warmonger in the White House. That does none of us any good.

President Bush spent our Social Security (about $2 trillion) on invasions of Iraq and Afghanistan. White voters must hold their Congressional representatives accountable. They must lead by example in electing Paul-like Libertarian Republicans. The gesture alone would go a long way in convincing black and Latino sheep that we are all in this together.

2) Black and Latino Democratic Voters Must Leave The Herd

Obama specifically caters to Latin immigrants. It will be difficult convincing that demographic to choose Paul over Obama. The White House announced that ICE (Immigration and Customs Enforcement) will review deportation proceedings of 300,000 individuals caught in the country without a visa or work permit. That effectively halts all such proceedings. Obama is also an open and ardent supporter of the DREAM Act. It would grant permanent residency to non-citizens who have been living in the United States without a visa or work permit. Further, Republicans don’t even view Latinos as humans. They call their children “anchor babies” and “terror babies.” The average Latino/a has good reason to shun Republicans.

These latter factors also pertain to black Democratic voters. No matter how many Allen West’s or Michael Steele’s come out of the wood work, and no matter what Republicans say, their actions speak louder.

Republican = Confederacy. Just look at the 2008 Presidential Electoral Map. Texas Governor and 2012 GOP Presidential Candidate Rick Perry spoke about his state seceding from the Union a couple months after Obama was inaugurated. 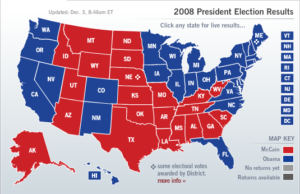 Obama had only been in office for three months when Perry spoke of secession. There had been no policies enacted or actions taken by Obama that could anger Perry to the point of talking Civil War II. Thus the only reason he would say this is to secede from a black President.

Regardless, the sheep mentality with black Americans and the Democratic shepherds is scary beyond belief. Here is a prominent list of Democrats since black Americans began voting for them en masse during and after President Franklin Roosevelt Administration in the 1930s:

Strom Thurmond, “Dixiecrat” from South Carolina, who also fathered a black child when he had sex with a 16-year-old black girl when he was 22, is well…

U.S. Senator Robert Byrd, D-West Virginia was part of the terror group KKK. He once told U.S. Senator and proud racist Theodore Bilbo, D-Mississippi, “I should die a thousand times, and see Old Glory trampled in the dirt never to rise again, than to see this beloved land of ours become degraded by race mongrels.”

Former Democratic President Bill Clinton gets a lot of positive vibes and reviews from the black people. But this guy signed four federal statutes into law that further niggerized “black” people.

Black voter turnout was record-breaking in 2008. Said voters chose Obama at a 95 percent clip. But black voters cannot vote for Obama just because he is black and a “Democrat.” He needs to have black people’s back like back people has his back. But that doesn’t happen. Obama has made clear that white liberals and immigrants are his primary concerns. Obama never acknowledges black people specifically. He is the president for the rich white people and white homosexuals.

Not voting for Obama does not mean black people cannot defend him from baseless tea party attacks. It just means that he needs to give black people something in return for their votes besides optics.

3) Ron Paul Needs To Be Himself, While Reaching Out To New Voters

Ron Paul is a likable guy. But many black people and Latinos may not know this. They may not even know Paul exists. State-run media continually bring up an issue with Paul from the 1990s. Paul’s staffers published “racist newsletters” that talked about black people like they were animals. Dr.Paul has repeatedly confirmed he didn’t write any of it and had no knowledge of it. He went deeper during a debate on ABC.

Don’t hold your breathe waiting for Obama to say something that specific about black people. I know Dr. Paul does not do much people-specific campaigning. But with television (big brother) as monopolized and powerful as ever, he really has no choice if he wants to win.

A vast majority of Americans are tribal sheep. The only way his message will get out is direct contact with people. State-run media are not going to do Paul any favors. Therefore he must aggressively win the people over himself.

A poll back in April indicated that most Americans could not name even ONE GOP candidate for 2012. This is an opportunity for the anti-war, pro-liberty Paul. But only if he’s willing to go get it.