Maricopa County “Shurff” Joseph M. Arpaio now has competition in his quest to be inbred whiteboy #1 in Arizona. You decide. 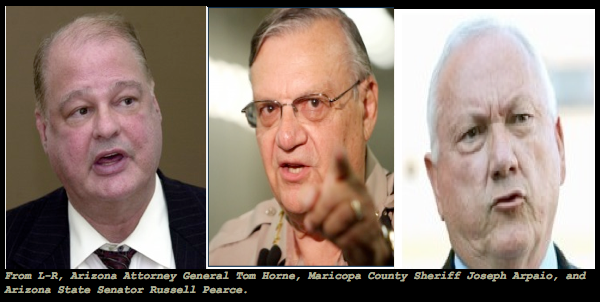 It has now been proven not only in Arizona, but across the USA, that whiteboy paranoid rhetoric and actions can and will get you elected to public office on the Republican ticket or get you a raise or promotion at your current job.

Don Imus’ infamous April 2007 quip about “nappy headed hoes,” referring to the Rutgers women’s basketball team, got him a settlement from the company that fired him, CBS Radio, somewhere in the vicinity of $15 million, and a new job at WABC radio. The contract at WABC is believed to be five years and $40 million. U.S. Representative Addison “Joe” Wilson, R-South Carolina, easily won re-election in November 2010 after completely disrespecting the “black” President of the USA when he yelled “you lie” as the President addressed health care reform to Congress on September 9, 2009.

And of course, we can’t forget Louie Gohmert, R-Texas, who likely won a lifetime congressional seat in Texas after not only claiming Mexicans and Muslims are having “terror babies” in the United States, but that they and basically any non-European people will “destroy our way of life”; “our” meaning rich Euro-Americans and their sheep.

You may also watch this clown make a complete ass out of himself on a CNN interview from this past August too.

The matter at hand, however, involves our great state of Arizona and the now contested Whiteboy Supreme title coveted by many here in the Grand Canyon State. We’ll break down the aspirants resumes and will let you, the “voters,” decide.

Horne was elected Arizona Attorney General in November 2010. An over-privileged “jew” all of his life who plays the Jew Card often, Horne had to be firm and decisive in his whiteboy manuevers, and make sure to do harm to all non-Europeans. The result: Horne, as Arizona’s state school superintendent of public schools, banned all ethnic studies courses in schools that get state funding.

All courses that teach the truth about Arizona being part of Mexico before Euro-Americans took it at gunpoint, courses that teach about Malcolm X or Nat Turner, and courses which tell the truth about the Euro-British-American colony known as “Israel.” The ban was signed into law in May 2010, which propelled Horne to a win in the November general election over Democrat Felecia Rotellini. 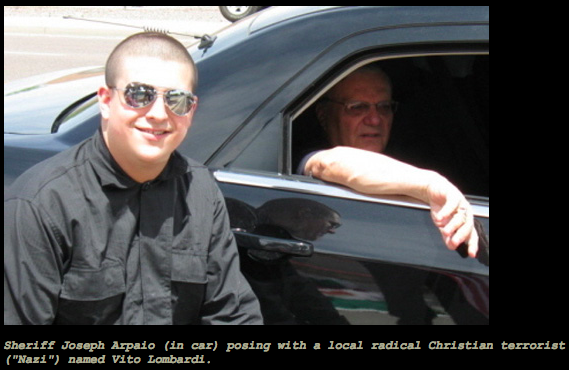 The Maricopa County Sheriff is the one aspirant people across the country know because of Arpaio’s diva-like lust for camera time, no matter how he gets it. Inbred to the core, Arpaio has been re-elected sheriff four times since 1992 on the platform of deport all Mexicans and jail pre-trial, non-convicted detainees in concentration camp-like jails.

Arpaio has been the undisputed Whiteboy Supreme in Arizona for quite some time. But Horne and Pierce (more on him below) are now competing for the position. Arpaio conducted what white media calls a “sweep” throughout the city over the past few days to let his white disciples know that he’s still supreme. His “posse,” including actor Steven Seagal, randomly arrested 83 brown people on various immigration charges. The raa-raa whiteboys of Arizona joyously approved, after many had wondered why it had been six months since Arpaio’s last “sweep.”

The good news is that Arpaio is morbidly obese and 78-years-old, which means he should be dead (hopefully) in the near future.

Pearce is doing all he can to overtake Arpaio and hold off Horne for the coveted Whiteboy Supreme title, and has possibly done enough to win the title. Not only has Pearce let his affection for a radical Christian terror group known as “Nazis” be known, but he is the author of the Arizona immigration bill SB1070. It gives police more power-whiskey to arbitrarily arrest anyone who is darker complexioned than an average Euro-American.

Pearce is also a staunch advocate of amending the U.S. Constitution’s 14th Amendment to end birthright citizenship. Pearce also endorsed radical Christian terrorist J.T. Ready, a Nazi who ran for Mesa City Council in 2006. He promotes white-on-white crime and his hatred for “jews.”