For decades, it was always Booker T. Washington; then Clarence Thomas became the “black” Republican mascot of the U.S. Supreme Court in 1991 thanks to Bush I. 20 years later, a newcomer is now worthy of mention in the Thomas-Washington dichotomy. The three candidates all have impressive resumes, but we’ll let you decide.

Washington is best known for being one of the founding members of Tuskegee University, an “historically black college” in America. It is also the site of the United States’ genocidal Tuskegee experiments, administered by the U.S. Department of Health.

The 40-year genocide deliberately infected hundreds of “black” American men with syphilis. Though penicillin could have easily cured them, Euro-American doctors used the men as lab animals to test how long human beings can survive with the disease. Most all the men died and several spread the disease to their wives and subsequently to unborn children.

The Tuskegee genocide precedent and the patent for the man-made AIDS virus are dismissed by white people as “conspiracy” and as “blacks playing the race card.”

Washington is also known for his concept of “conciliation.” This meant  men, women, and children newly freed from Euro-American imperial captivity in the 1880s, were taught to accept his belief that they are lesser beings than “white” people.

Under Washington’s leadership, Tuskegee taught courses in cotton picking, cleaning, and domestic servitude under the guise that service to “white” Americans was beautiful and dignified work. He felt that civil rights were unnecessary and that “blacks” should simply be happy there was a Thirteenth Amendment which at least, on paper, freed them from imperial control.

Mercifully, Washington died in 1915. He has been lionized by Euro-American media and by public schools named after him. Any “black” who teaches his own people to be subservient and obedient (or just acquiescent) to the ruling class will always be loved by the Euros who write history. See Martin Luther King, Jr.

The truth is that, due to the recency effect and the perpetually humorous Republican whiteboy pouting about “a black” being in the White House, only a Nubian brother or sister can give an objective opinion about the President.

At least half of Euro-America sees monkey, tar-baby, illegal alien, and/or radical Muslim before they can even consider weighing Obama’s failures and weakness. The minority of Euro-Americans who have the ability to see “U.S. President” first likely cannot comprehend why this man may as well release his Bohemian Grove sex tape to the constituents he caters too and wants to be a part of.

We’ll start with Obama’s domestic record. It is common knowledge that Obama cannot and will not EVER dare specifically use executive power for legislation specifically beneficial to “African Americans.” He will never imply support for said people, nor will he even subtly acknowledge said people.

Obama knows his Euro-American voters, mostly liberals, would completely turn on him. Confederate TV (Fox News) would loop any potentially “pro-black” snippet as they did the Reverend Jeremiah Wright. In fact, the only time Obama specifically addressed a real issue that disproportionately effects “African Americans” (imperial police occupation of Nubian neighborhoods in the USA), he was quickly instructed by his Zionist masters to backtrack on his words.

Since the Henry Louis Gates  abduction by Cambridge (MA) police, Obama now says problem solving must be about all Americans when asked specifically about “African Americans.”

But it is Obama’s foreign policy which earned him a spot on this infamous list. Barack Obama will go down in history as not only the first (and likely ONLY) “black” U.S. president, but the U.S. president who destroyed the African Investment Bank in Sirte, Libya.

Obama unilaterally ordered NATO to bomb Libya and arm al-Qaeda operatives (yes, that’s Osama bin Laden’s gang al-Qaeda) against the Libyan Army. Col. Muammar Gaddafi’s plan of a gold-standard money for all African countries would have ultimately freed the entire Continent of all residual Euro-imperial control (i.e. the World Bank and IMF). That is something Obama’s Zionist masters would never allow.

Obama is the U.S. president who is commencing a 21st century version of European imperial manipulation (colonization) of the Continent. A man with a father from Kenya who is rolling over in his grave, Obama also attended a Bohemian Grove ceremony in Monte Rio, CA. This is where the world’s billionaires do all kind of weird homosexual initiations for acceptance into ruling class politics.

Obama has also used drone aircrafts to unilaterally bomb Yemen and Somalia, and Syria is likely next.

Where do we start with our favorite Uncle? Clarence is a George H.W. Bush appointee to the United States Supreme Court, which should tell you all you need to know about this Stepford House Buffoon.

I guess we can start with the June 2009 U.S. Supreme Court decision in the case of Northwest Austin Municipal Utility District Number One v. Holder. In an 8-1 decision, the Court upheld the 1965 Civil Rights Act, which outlaws statutory disenfranchisement of “African Americans” (via poll taxes, racial intimidation/assault/murder, etc.). The one dissenting vote was not whiteboy justice supreme Antonin Scalia…but was in fact Thomas, who reasoned the act is no longer necessary.

More recently, and even more creepy, Thomas, with a stroke of a pen, could have forever changed the way U.S. citizens could seek compensatory and punitive damages against rogue prosecutors. Since “black” Americans are forced to represent 50 percent of the U.S. prison, parole, and probation populations by imperial statutes and customs, the decision would have been monumental for said people.

John Thompson was convicted of capital murder in 1985 by Louisiana prosecutor Harry Connick Sr. (yes, the father of singer/actor Harry Connick, Jr.). It was discovered by private investigators in 1999 that Connick had hidden exculpatory evidence, mainly blood at the scene of the murder which did not match Mr. Thompson’s.

Evidence further showed eyewitness accounts at the time describing a suspect who looked nothing like Thompson. After 18 years in prison (14 of which were on death row), Mr. Thompson was released and the malicious murder conviction overturned.

Mr. Thompson sued Connick and was awarded a $14 million verdict which was upheld by the Fifth Circuit Court of Appeals. But Thomas wrote the opinion for the Supreme Court in a 5-4 decision overturning the verdict (see Connick v. Thompson (2011)). This virtually cemented the U.S. custom and tradition that prosecutors are immune from any and all accountability for their illegal, criminal actions.

Thomas’s one vote would have not only helped heal 18 years of concentration camp suffering of Mr. Thompson, but would have paved the road for hundreds of thousands of “African Americans” to seek justice for the perpetual malice and manipulation by U.S. prosecutors upon their communities. 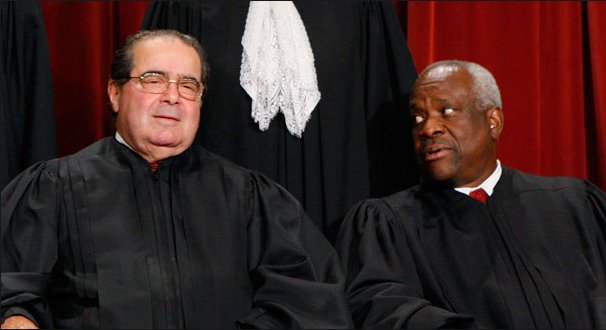 Thomas has also ruled repeatedly that it is not a violation on the Eighth Amendment’s cruel and unusual punishment clause for prison guards to assault individuals held captive in concentration camps (see e.g. Hudson v. McMillian (1992)). Most of these prisoners have committed victimless, non-violent U.S.-created “crimes.”

Anita Hill and Angela Wright both brought forth allegations of Thomas’s sexual harassment during his Congressional confirmation hearings for his Supreme Court post. Thomas was their boss at the Department of Education.

Thomas was barely confirmed by the Senate, in a 52-48 vote in October 1991. A hero of Euro-American Republicans and commentators, Thomas will be on the Supreme Court for the foreseeable future, and continue his lifelong dream of being Scalia’s dog.