We were emailed a link to the McDonald County Forums (now defunct). It is a message board for members of the community. The murder of Mr. Stacy has been a hot topic, and apparently too hot. The administrator of the forum, who calls him/herself “Scutter,” closed the forum to further comments.

This “Scutter” is obviously part of government there. But what I found even more interesting, while perusing the posts, is a commenter named “Bud.” This is obviously the chief deputy of the McDonald County Sheriff’s Office. Another forum user is named “Judy Testerman,” who is probably, well, JUDY TESTERMAN. 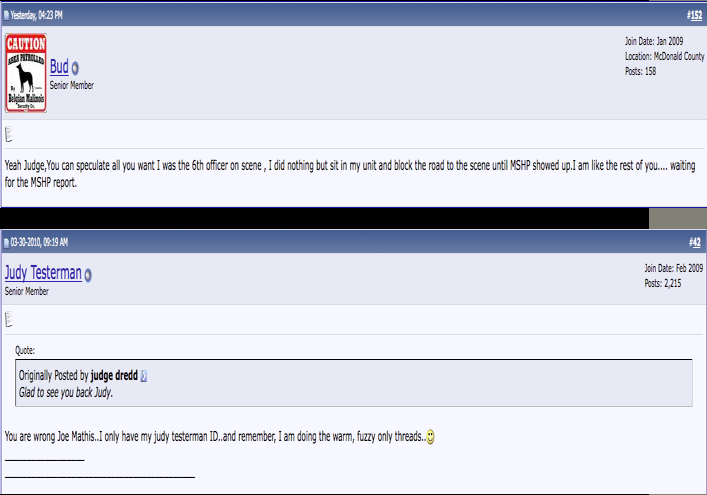 Not only do these people only care about themselves, but are also not very bright. The two of them are major players in a murder case, yet feel comfortable and confident enough in their good ‘ol boy network to comment online about it. Maybe because they know that no matter what, they will face no repercussions for their adultery or their blatant malfeasance in trying to cover up for Massa.

But even when the forum was active, it appears “Scutter” censored it. The moderator erased all information about Operation-Nation and our coverage of the murder.

The people in that county are in danger. The only advice for them is to exercise 2nd Amendment rights and protect yourselves. That government is a disgrace. The Taliban has more credibility than McDonald County officials.

UPDATED 4/12/2010: Massa’s Father-In-Law Was First Investigator At The Scene

A source has now confirmed that Harvey “Bud” Gow, the chief deputy for Sheriff Evenson, was the first person to arrive at the scene of police thug Massa murdering Mr. Stacy. Obviously this creates myriad conflicts of interest and destroys what little integrity these alleged “investigations” still had. We have also been told that the mayor of Southwest City, Ryan McKee, is the nephew of Judy Testerman, who was Massa’s immediate supervisor. According to another source, Testerman had an on-duty extramarital affair with chief deputy Gow this past year. She left her husband, and moved in with Gow after he kicked his wife out. Obviously these people have no morals and care only about themselves.

We’ve also now confirmed, through a reliable source, that Mr. Stacy was in fact shot one time above his right ear (sounds like “execution style”) and obviously died instantly since the coroner was called to the scene. But Mr. Stacy was still transported by ambulance to Grove, OK, and then airlifted from there to a hospital in Tulsa. The only reason for these “investigators” to transport a dead man that far is to create a mirage meant to deceive the citizens of McDonald County and/or to just flat-out cover up this cold-blooded murder.

It is becoming abundantly clear that McDonald County is one of the more corrupt, criminal syndicate municipalities in the USA, and that Massa is unlikely to face any charges (let alone murder) for killing Mr. Stacy. All of Massa’s pals in high places are sleeping with one another. The Stacy family should immediately file a federal wrongful death (Fourth Amendment) lawsuit against Massa and Southwest City. This will force Massa, Gow, and others (via deposition) to answer questions under oath.

Operation-Nation has been asked by two local radio station in the Southwest City/Rogers area to come on and talk about this case and others like it. We will let you know if/when this happens.

UPDATED 4/6/2010: McDonald County Prosecutor, Sheriff, and Massa All In Bed Together

About two hours after this story was published, we received several emails voicing concern for the family of Mr. Bobby Stacy. We’ve also learned more about Brian Massa. A source has now told us that it was not Gregg Sweeten in which Massa illegally used his position to obtain information on. It was information regarding Mrs. Tammy Sutherland, who is the wife of Jeff Sutherland, who also ran for Sheriff in 2008.

Operation-Nation has obtained court documents which tell a story that reminds of Maricopa County, AZ. According to the complaint filed by Jeff Sutherland on March 12, 2009 with the Missouri Attorney General, Brian Massa (the killer cop) committed the crime of Misuse of Official Information with regard to Mrs. Sutherland. Massa also admitted to committing the crime, in writing, to a Deputy William Davenport. With probable cause established, McDonald County prosecutor Janice Durbin-Atkins filed a criminal complaint against Massa. 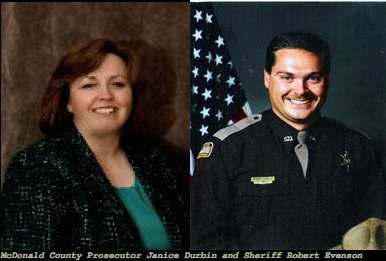 And here is where the story only begins. Again according to the complaint, on January 23, 2009, Durbin dismissed the charges against Massa. The dismissal possibly could have included some sort of payoff, since Durbin filed Chapter 13 bankruptcy late in 2008 and needed money. This was also two months after her friend, Sheriff Evenson, was elected. When asked by Sutherland why the charges were dismissed, Durbin said, among other things, “prosecuting Massa would put [her] in a difficult spot, and make [her] out to be the bad guy.” It is only because of Sutherland, a former 17-year veteran of the McDonald County Sheriff’s Office, that Massa was re-charged and ultimately convicted of the crime.

As we reported earlier, Massa is in fact sleeping with the right people. Massa was involved in an intimate relationship (they may be married now) with a Ms. Jennifer Brown, a former employee of Durbin. Brown is also the daughter of Harvey “Bud” Gow, the chief deputy of the sheriff. Durbin and Sheriff Evenson are also very close. You can do the math in your head to realize that Massa sleeping with Brown initially got his charges dropped (before being re-filed), and now may help him escape a murder charge.

There’ still more. Mr. Jim and Tammy Sutherland filed a federal lawsuit on June 19, 2009, v. Massa, Sheriff Evenson, and several other county officials. The claims include invasion of privacy, public disclosure of private facts, and several other counts. The lawsuit seeks injunctive relief, compensatory, and other damages, against the Defendants. Massa pleading guilty means it is just a matter of time before McDonald County settles the claims.

We were also told that Mr. Stacy was shot in the back of the head by thug Massa, but we cannot confirm that. Bottom line is that Massa should not have been on the streets to begin with. Now a man is dead, and McDonald County has a sheriff who will curry favor to his buddies (like all other good ‘ol boy networks). Massa is an obvious criminal and needs to be charged with murder. But there will be no fair, balanced investigation, just as there is/was not in Bella Vista. We’ll update if we learn more. 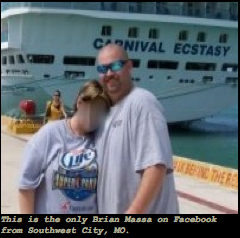 Here is what we know about the government-sanctioned murder which took place in Southwest City, MO. The town is, ironically or otherwise, only about 25 miles from Bella Vista, AR, where another murder by cops took place in January. We know for a fact that on Sunday, March 28, around 2 a.m., Mr. Bobby Stacy was pulled over by Southwest City (MO) police thug Brian Geoffrey Massa on Monday. Mr. Stacy died of gunshot wounds that Massa recklessly and deliberately fired. Massa was rewarded with a paid vacation, aka “paid administrative leave.”

According to the McDonald County Sheriff’s Office, and Southwest City Police Chief Monty Brannon, Massa “was forced” to open fire after Mr. Stacy tried to “run him over.” Operation-Nation confirmed with the Southwest City Police today that the officer involved is in fact Massa. This cop has a checkered past and should not have been on the streets patrolling anyway.

An emailer down in that area sent us some very disturbing information about Massa, who recently pleaded guilty to using his position as a 911 dispatcher to obtain information about McDonald County Sheriff Robert Evenson’s opponent, Gregg Sweeten, during the 2008 election season.

Massa was sentenced to a fine and allowed to keep his job. A little more than a month later, Massa murdered Mr. Bobby Stacy for no apparent reason. We’ve also been told that Massa’s father-in-law is the chief deputy to the newly-elected Sheriff Evenson.

For a town of only 850 people in about 330 households, it’s disturbing that Massa is not the only crooked cop in this department – a department with only 10 or so employees. “Officer” Andrew Cummings, of the Southwest City Police, is currently facing felony theft charges. He stole a woman’s laptop computer during a 2007 traffic stop, then lied about it to investigators.

Massa should have been removed from his position after the guilty plea. Judging from some of the Facebook groups he is a part of, such as “I Don’t Need Anger Management…You Just Need To Stop Pissing Me Off,” he should have never been a cop to begin with.

What can possibly be going on in that tiny area where the borders of Oklahoma, Arkansas, and Missouri all touch? We reported a while back that Coleman Brackney, the cop who murdered James Patrick Ahern in Bella Vista, AR, was hanging out at bars across the border in Missouri, enjoying his paid vacation. You have to wonder if Brackney and Massa, who committed similar murders in the same area, are friends.

We left a message for Sgt. Mike Watson of the Missouri State Police, who have taken over the investigation. We did not hear back from him before publishing. We also tried to find listed phone numbers of Mr. Stacy’s relatives, to no avail. We assume that this scant information being made available by State Police and Southwest City Police, is to aid in yet another cover-up in the Fayetteville-Springdale-Rogers Metropolitan area.

Our thoughts are with the Stacy family. We will keep you updated as we learn more.