NOTICE: There will be a memorial service for James Ahern in Omaha on Saturday 6/19/2010.

The memorial will be held at Creighton Prep Chapel, 7400 Western Avenue, Omaha, NE. The service starts at 10:00 AM. There will be time given during the mass for friends to get up and talk about Mr. Ahern. This service was set up by some of Mr. Ahern’s friends in Omaha since there was no funeral service there. All of Mr. Ahern’s friends, family, and supporters are welcome to join in celebrating his life.

One things is certain about thug killer Brackney…he married a classy, righteous woman. I’ve never met her, but if rumors are true that she left the killer cop after the murder of Mr. Ahern, that is all the information I need. Who knows if it was all the media and internet attention the story is getting, or just an ethical move. Since she left him, a Bella Vista resident told us that Brackney is enjoying his paid vacation, drinking in several bars across the border in nearby Missouri.

Got to give yet another Op-Nat reader props for digging up more about the Bella Vista Police. “Gulf War Vet” brought to our attention the story of Mr. Joseph Erin Hamley, the young man who as murdered in cold-blood by Arkansas State Police thug Larry Norman on March 7, 2006. Mr. Hamley, who was unarmed and had cerebral palsy, was murdered by thug Norman less than one minute after Norman arrived on the scene, which was already well in control by several other cops. Thug Norman was ultimately indicted, but here’s the catch: he was convicted of “negligent homicide,” a MISDEMEANOR. He was ultimately sentenced to a mere 90 days in jail. And to add more insult to Mr. Hamley’s death is that Norman got a 10-day sabbatical from jail during his sentence to “get his affairs together.”

So if – and that’s a HUGE “IF” – Brackney is even charged, it will be for a misdemeanor, based on Arkansas precedent. Only in America…and Russia, China, and North Korea.

As more information pours into us about this murder, the more disgusting it gets.

Two sources have told us that the ambulance report from when Mr. Ahern’s body was removed from his car indicated he was shot in the back. It appears Mr. Ahern was trying to get out of his car via the passenger-side door, maybe to get away from a killer cop (Brackney) with an itchy trigger finger. This is also the reason no coroner report or dash-cam video has been released. Not sure how the “car as a deadly weapon” excuse will fly if this turns out to be the case.

Another emailer pointed out to us that after a housefire in Bella Vista killed five people last week, the fire department released information regarding the investigation almost immediately. The difference is that when you do not have to coordinate lies government bodies can immediately release information.

The longer Chief Farmer draws this thing out, the more people will have to rely on speculation. Own up to your responsibilities, Chief. We realize you are new to the position, but that is no excuse. But you are a COP (Constitutionally-protected), so your behavior thus far is expected.

Anybody who believes the State of Arkansas is not corrupt and will not go as far as killing American citizens to cover up something they shouldn’t be doing only need to recall the murders of two Bryant, AR teenagers, Mr. Kevin Ives and Mr. Don Henry, back on August 23, 1987. The two young men were murdered after they witnessed drugs being dropped from an airplane in nearby Alexander, AR.

The drugs were en route to Mena, Arkansas, about 170 miles south of Bella Vista. Three U.S. presidents, including former Democratic Arkansas governor Bill Clinton, have been indicated as major players in the smuggling operation headquartered at the Mena airport, which is reportedly still a hotbed for cocaine and heroin smuggling (we all know how Bill Clinton liked to party).

But Mr. Henry and Mr. Ives are only two…of at least 30 (and probably more) people who were murdered by Arkansas government officials in the subsequent 12 years, because they had information which could unravel the entire operation.

The Mena Connection is a documentary that tells the entire story. Watch below.

A savvy commenter to this story named “Mike” brought to light the fact the Bella Vista Police Dept. hired a lying, cheating cadet named Scott Vanatta in 2008. Vanatta was caught cheating on a police academy exam, and was initially punished with a two year suspension before he could re-apply to the academy. But former Bella Vista Police Chief, Jim Wozniak, went in front of the Arkansas Commission on Law Enforcement Standards and Training on July 10, 2008, and successfully begged the Commission to reverse the two-year penalty and allow him to hire Vanatta. Read the 13-pages of back-and-forth arguments here.

Among some of the most notable quotes from Wozniak, in support of Vanatta include: “Black balling Scott Vanatta for two years is like giving him the death penalty.” I bet Mr. Ahern would have gladly accepted a two-year probation sentence as opposed to the REAL death penalty he was given.

Wozniak continued, “The fact that he was dismissed and the fact that he will have to start over is enough. He has to live with that every day.” Mr. Ahern cannot LIVE with anything anymore.

The lying, cheating Vanatta has now been on the force since 2008. Wozniak retired from the Bella Vista PD in September 2009, and Ken Farmer took over shortly thereafter. Congressman John Boozman, R-Arkansas, also praised Wozniak right before he retired.

Brackney, Vannatta, and Republican Boozman are all you must know about the integrity (or more fittingly LACK THEREOF) of the Bella Vista PD and the state police “investigations” which are supposedly taking place now. We predicted it would be 10-16 weeks before they reveal any information about the murder of Mr. Ahern. It has been three weeks as of today. In other words, do not expect the final draft of their lies to be revealed until late March at the earliest.

As of today, Bella Vista Police have still released no details about the murder, nor pressed any charges against the killer.

Several individuals have informed us that they are now being targeted by local police because they have spoken out about the murder of their friend and brother. This is standard protocol for police departments all across the country, when they are conjuring a story to cover murders under color of law. One resident said Bella Vista Police have been circling their home at night, and they may have to move for the sake of their children.

The police chief still insists the investigation is “ongoing” and has nothing new to report. 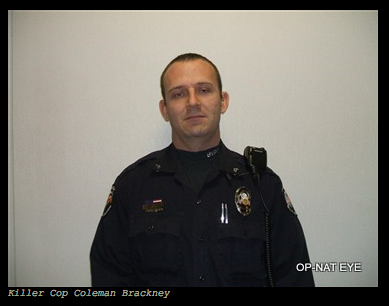 As first reported by the OP-NAT EYE on Saturday, Bella Vista Police Chief Ken Farmer has now confirmed to a few OTHER Arkansas news sources today that the killer cop’s name is in fact Brackney. They are referring to him as, “Cpl. Coleman Brackney.” Seems he had no choice but to disclose this information after we already did.

Now if Farmer will only confirm the excuse for the murder which is currently being concocted by his department (see below).

UPDATED 1/25/2010:
Bella Vista Police Will Use The Proverbial “Car As A Deadly Weapon” Excuse

Though Bella Vista Police claim to be new to these sorts of investigations and not accustomed to them [thus the protracted time-frame], they sure know how to use one of the most common excuses police departments across the country use to justify murder of American citizens

Sources have told us that Bella Vista Police will say Mr. Ahern “used his car as a deadly weapon,” so was thus “armed,” thus police thug Brackney “feared for his life.”

The police have yet to publicly confirm (or deny) that Brackney is the officer involved.

This, according to a source close to Mr. Ahern [name redacted]. This information was obtained from another witness who was at the scene, but ordered to leave the scene by police before recognizing the killer cop. We’ve also now confirmed there is in fact an officer named “Brackney” who works for the Bella Vista Police. [Carol, after seeing a photo of the killer cop, does not believe Brackney is the same cop who once insulted her fiancee….UPDATED 1/25/2010]. We will continue to update the story as more information comes in.

Again, this cold-blooded, premeditated murder has been obvious since news first broke of it happen
ing. But now Mr. Ahern’s fiancee, who wants her identity protected (don’t blame her, considering the blatant thuggery of that “police” department down there), said her fiancee was arrested for DUI earlier in the week, and likely fled police to avoid being arrested again. Last time I check though, a DUI is not an offense punishable by death.

We have learned that Mr. Ahern’s mother and father both passed away within a six month period this past year. We do not know how or any of the circumstances surrounding his parents’ deaths. However, it is safe to say Mr. Ahern was likely very distraught, as losing ONE parent is difficult. Of course, the police thugs who murdered him aren’t even human, and would have likely laughed before shooting and killing Mr. Ahern if they were aware of the situation he was in.

As of today, Bella Vista Police are still trying to get their lies straight. 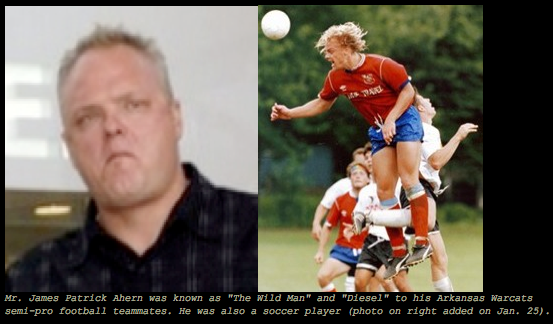 All you need to know is this: dash-cam video caught the entire incident on tape, yet Bella Vista Police refused to release it to the public. And as you know, when dash-cam video is favorable to police thugs, they release it immediately so cop-suckers can stroke them as heroes.

Instead, Bella Vista Police chief Ken Farmer says that what happened was, “an officer -involved shooting…that resulted in the death of an individual” and continued, “we’re not going to sacrifice quality [in the investigation] for speed.”

In other words, they need more time to get their lies straight.

The murder happened Wednesday in Bella Vista – a small town of about 17,000 in northwest Arkansas – when 41-year-old Mr. James Patrick Ahern apparently crashed his car into a ditch, following an alleged “police chase.” Moments later, a Bella Vista police thug, whose name is being protected by the city, jumped out of his car, started yelling at Mr. Ahern for a few seconds and kicking his car windows, before opening fire through Mr. Ahern’s windows; killing him instantly. The police thug was rewarded with a paid vacation (aka “paid administrative leave”).

Watch a report from 40/29 News in Fort Smith/Rogers AR:

The witness in the video, Mr. David Whitney, went even further, telling another news source that the cop, “may have overrreacted,” and that, “I would like to know what [the victim] did wrong to be shot and killed.” Another witness, Donna Martinez, said she all of a sudden just heard a bunch of gunshots. She thought she lived in an area which this kind of stuff does not happen, according to KFSM News.

There are apparently kangaroo investigations being conducted by the Arkansas State Police and the Bella Vista Police. However, we all know these investigations will last 10-16 weeks, with a conclusion that the police thug was “justified in his actions.”

Mr. Ahern had no family in Arkansas, but its being reported that family members in Omaha, NE have been contacted. It is pretty obvious Mr. Ahern was unarmed, as the police would have made this public in the very minutes after the murder to “justify” the killing.

We will keep updating this story as we learn more and/or if we can contact any family of Mr. Ahern. Our thoughts are with the Ahern family.