Charles Davis, Jr. also settled his federal lawsuit against the city for $1.2 million two weeks ago. He was shot in the back and left paraplegic by Oakland Police thug Hector Chavez in 2007.

The posthumous slandering of Lovelle Mixon continues in state-run media. Meanwhile we found the inevitable truth about two more of these dead cops Mixon killed. John Hege was listed in a 1995 Citizens Police Review Board complaint. Hege broke down a door and assaulted a resident who was kneeling on the ground. The resident suffered a detached retina, broken ribs, a concussion, and missing teeth.

Oakland cop Alan Leal killed 15-year-old Lorante Studesville on July 3, 2007. The unarmed child was shot in the back. He barely survived. Leal was recently named in a federal lawsuit. He falsified information to obtain illegal search warrants, according to the complaint. Nobody is surprised by this.

Watch the video by Lorante’s father, Reverend Sanders. He is documenting his son’s recovery in the hospital.

Citizen journalism and message boards continue revealing truth about the four dead cops and the one that survived. Pat Gonzales, the cop that escaped death, shot and killed 20-year-old Gary W. King back in September 2007. Mr. King was shot twice in the back. Oakland Police maintain King was reaching for a gun. But several witnesses said King was unarmed. Gonzales will likely survive the karma that almost came his way. 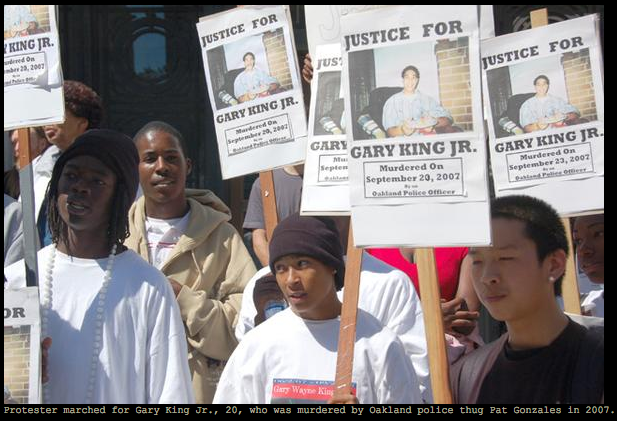 OAKLAND — State-run media, particularly San Francisco Chronicle and the New York Times, continue smearing Lovelle Mixon in their one-sided, biased coverage of the March 22 incident in Oakland. They continually refer to Mixon as “parolee.” It’s been repeated numerous times that Mixon was a special education student who dropped out of school in 10th grade. They constantly reference his six year prison stint. Now there is even a conjured rape case involving Mixon to create a motive suitable for their agenda.

State-run media have amnesia. The gross corruption within the Oakland Police Department is suddenly non-existent. They have not mentioned the blatantly malicious treatment of Oakland residents by Oakland Police at all. This was obviously Mixon’s motive. But the truth doesn’t fit their agenda.

A group of police rogues called the “Oakland Riders” terrorized residents for at least three years earlier this decade. The San Francisco Chronicle covered the criminal probe of the Riders extensively. But their editors have seemingly forgotten about it now.

Oakland Police thugs Matthew Hornung, Clarence “Chuck” Mabanag, and Jude Siapno went to trial on charges of assault with a deadly weapon, false imprisonment, conspiracy, and filing false police reports. They carried out their malicious acts with the blessing of former Oakland Police chief Richard Word, according to court documents. 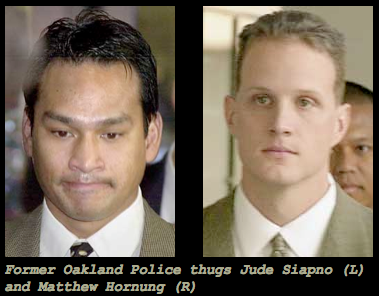 Francisco “Choker” Vasquez was the ringleader of the Riders police gang. He’s been a fugitive on the FBI most-wanted list since 2000. It’s believed he’s hiding in his native Mexico. 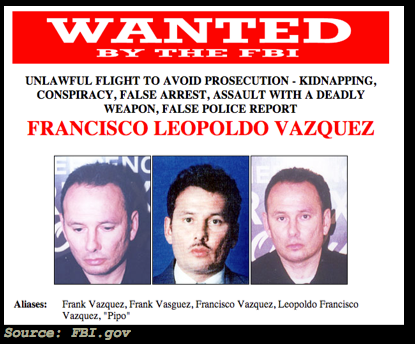 The trials for the Oakland Riders all ended in acquittals or hung juries. This is standard police state protocol. The  thugs actually tried getting their jobs back with the Oakland Police Department once they were acquitted.

The City of Oakland paid a $10.5 million settlement to 119 victims of the the Riders gang. The claims included malicious prosecution, kidnapping, assault and false imprisonment. See Allen vs. City of Oakland settlement here. The city paid another $195,000 in a separate lawsuit filed by another Riders victim. There are more lawsuits either still pending or that were settled confidentially.

Karla Rush and 11 more Oakland cops were fired for falsifying sworn affidavits in January of this year. The cops filed the fake documents hoping to secure search warrants that targeted East Oakland residents. Many of the false affidavits claimed the police bought or found drugs from suspects. But police violated their own policy by failing to test the substances to prove they were illegal narcotics.

The 11 cops lied to internal affairs investigators when asked about their malicious acts. Several Oakland residents, including Reginald Oliver, were cleared of pending charges as a result of the investigation. At least 12 residents were released from jail. Several more cases are still in question. Oliver has filed a federal class-action lawsuit. The complaint alleges violations of the Fourth and Fifth Amendments.

Former Oakland Police Chief Wayne Tucker called all the involved officers’ conduct “inexcusable.” Tucker was in charge of the department when all the crimes took place.  He had many other problems before being forced to resign from the department. His final day on the job was February 28. 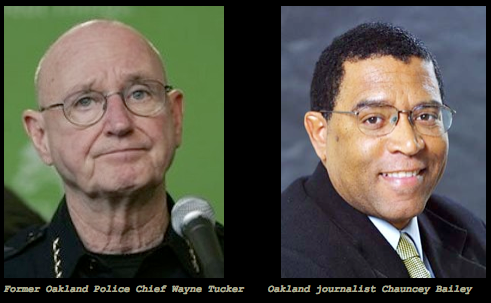 Tucker is responsible for the August 2, 2007 murder of journalist Chauncey Bailey. Several associated of the Your Black Muslim Bakery were arrested in connection with the murder. A 16-month investigation by the Chauncey Bailey Project forced Tucker to admit the mistakes that cost Bailey his life. Tucker initially lied to the public about his handling of the case. The Oakland Police Department planned a raid on the bakery for August 1, 2007. But it was delayed 48 hours so Tucker could accommodate the vacation schedules of two SWAT team commanders who wanted to take part.

Mr. Bailey was working on a story about the Your Black Muslim Bakery. It specialized in black self-sufficiency and “food suitable for not only Muslims, but Afrakan Americans as a whole.” The chain peaked from the 1960s through the 1990s when it sold products at 150 locations. The bakery morphed into a mob-style crime organization. There were rape trials, several murders, and financial backing of several local political heavyweights. Some Your Black Muslim Bakery executives detested Bailey because of his investigations into the company.

Corruption within the company was common knowledge because of Bailey’s reporting. But Chief Tucker delayed taking action. The bakery changed from a community-oriented business to criminal syndicate. Yusuf Bey IV, the CEO of the bakery before it went bankrupt in 2006, orchestrated the murder of Bailey.

Oakland cop Derwyn Longmire was the lead detective in the bakery case. Some believe Longmire was an accomplice. Longmire and Bey IV are also good friends, according to reports. Bey IV either killed Bailey himself or ordered someone else to do it.

Several of Chief Tucker’s appointees to command positions have problems as well. Assistant Chief Howard Jordan, who is the current interim chief of the department, led the investigations unit during the botched Bailey case. Deputy Chief Jeff Loman was named in a November 2008 sexual harassment complaint by a female officer in the department. Janeith Glenn Davis received a $550,000 settlement on March 5, 2007. The lawsuit claimed she was passed over for a promotion to captain because she was a mother and pregnant at the time. Captain Edward I. Poulson is currently being investigated by the FBI for beating an Oakland citizen who later died.

All the foregoing happened in the last eight years. It would be overkill to continue listing more criminal behavior by the Oakland PD. Lovelle Mixon is certainly no angel. The city of Oakland definitely isn’t Mayberry. But the band of thugs that call themselves “Oakland Police” are no better than janjaweeds of Sudan killing people in Darfur. Oakland Police have zero credibility because they continually scapegoat the pawns (low level officers) and let the commanders slide.

The pervading indifference in Oakland towards the four dead cops is justified. No human beings are going to support a terrorist organization like that.

Nothing is likely to change

The Oakland Police Department needs demolished and rebuilt. The crime levels in Oakland are inexcusable. But like police department, like its citizens. Police were once held to a higher standard. They were leaders, protectors and community servants. The Oakland PD is a gang. Gang violence leads to deaths. Perhaps Lovelle Mixon retaliated against the Oakland PD. But violence breeds violence. Consequently, Oakland has an endless cycle of violence from cops and some of its citizens.

State-run media will continue demonizing Lovelle Mixon and fluffing the criminal behavior of Oakland Police. We also expect more civil suits, FBI investigations and indictments against the Oakland Police. Lovelle Mixon and the four cops are dead. If not another murder happens in Oakland for the rest of the year, their lives weren’t taken in vain. But that would require major overhauls in the Oakland PD. That will never happen.

3 thoughts on “Oakland Police Department: A Criminal Cesspool of Thugs”