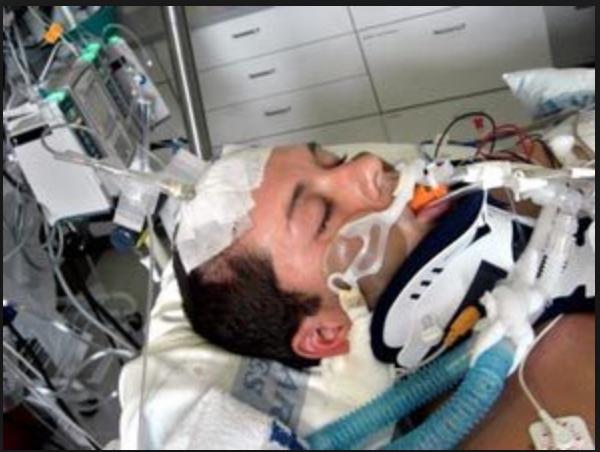 Mr. Christopher Harris after thug cop Matthew Paul chimped out on him.

SEATTLE — The picture above speaks more than a thousand words. Twice in the past two months, the King County (Washington) Sheriff’s Office has made national news because of thug cop behavior. First in March, it was thug deputy Paul Schene inexcusably attacking 15-year-old Malika Calhoun. And now this thug Matthew Paul, 26, has left Mr. Christopher Harris unconscious and in a coma since the May 10 incident. Judging from the extent of Mr. Harris’ head injuries (multiple skull fractures) and statements from the Harris family, it appears unlikely he will ever regain full consciousness and he may not survive.

The surveillance video from the night also  speaks for itself, as thug Paul, who weighs 270 pounds, acted like some wild animal, running into the 170-ish pound Mr. Harris like he was some kind of tackling dummy.

The thug cop probably inflicted further damage to Mr. Harris’ spine and skull by dragging him around after the vicious attack.

The incident took place on May 10, when a woman wrongfully identified Mr. Harris as a suspect in an alleged stabbing that had taken place at a nearby bar earlier in the evening. Harris, maybe remembering what happened to 15-year-old Malika Calhoun at the hands of King County police thug Paul Schene a few months earlier, and the pervading cop thuggery all across the country, and likely being intoxicated, ran when the cops approached him.

There is also conflicting testimony as to whether the police thugs identified themselves as cops or not.

The facts remain that nobody knows why Mr. Harris ran, and Harris was not the person involved in the alleged assault incident. King County spokesman, John Urquhart, added serious insult to Mr. Harris’ serious injuries, saying thug Paul “acted within normal rules,” that his actions “were in compliance with departmental policy,” and that the whole incident was a “tragic accident.” Of course, thug Paul was rewarded with a paid vacation for the deadly assault on Mr. Harris (thug cops’ P.A.L.: paid administrative leave).

Thug cops will continue their wild animal-like behavior as long as they know they will never face any sort of criminal charges or even civil liability. Qualified immunity is long outdated and the United States needs to adopt the same type of liability codes as Canada’s Supreme Court did a couple of years ago. Thug cops are a constitutionally protected gang who take full advantage of this fact.

No rational human being should ever call police for anything, especially in a big city. We have a 2nd Amendment for a reason. Operation Nation will try to keep you up-to-date on the kangaroo internal affairs investigation for this case. But like all others, expect thug Paul to be patrolling the streets once again upon return from his paid vacation.