Apparently this warrant was issued on the same day as the indictment. Leaf is obviously hiding in Canada somewhere. I’d guess a remote area like the Yukon Territories. He should have enough money to just disappear. But Leaf is obviously not very bright, considering the nature of these charges. Meanwhile ESPN is reporting the other former NFL quarterback with legal issues, Michael Vick, had a bowl of Apple Jacks this morning and brushed his teeth with Aqua Fresh toothpaste. 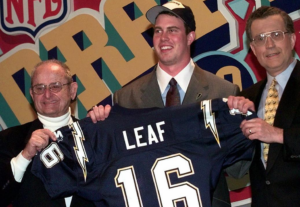 The first count stems from a September 17, 2008 incident. Leaf allegedly used the prescription information of Kolt Kittley, a senior wide receiver at West Texas A&M University, to obtain the drug hydrocodone. That is a fancy word for Vicodin, a commonly abused pain-killer. Leaf had been the quarterbacks coach for WT A&M from February 2006 to November 2008. He also served as the school’s golf coach for a short period of time.

Leaf was put on indefinite leave from his coaching positions on November 5, 2008, after allegedly asking one of his players for pain killers. He resigned the next day. The remaining counts resulted from incident that happened between January 23, 2008 and September 12, 2008. Leaf presented fraudulent prescriptions to various pharmacists.

The delivery of a controlled substance charge stems from a September 18, 2008 incident. Leaf allegedly kept pain killers meant for Kittley for himself. Leaf gave Kittley sugar pills or some other substitute to cover his crimes. Kittley likely discovered the crime either by noticing the pills looked different or swallowed one and did not feel the normal effects.

Leaf knew this indictment was coming. That may be why he chose to do his rehab in Canada. Leaf has yet to surrendered to Texas authorities. The Randall County District Attorney said Leaf will be given the opportunity to return to Texas “in a timely fashion.” The extradition process will begin if he fails to voluntary surrender.

Leaf’s sentence will be two years or less if he cooperates and no further charges are added. It’s not out of the realm of possibility for him to run either. He got an $11.25 million signing bonus in 1998. Leaf should have enough money left to buy an SUV and drive to some remote location in the Yukon Territories.

White media: Vick is criminal; Leaf is a victim

The Euro-American media have treated the Leaf situation completely differently than the Michael Vick situation. Many high-profile and regular Euro-Americans are also quite fond of painkillers. Brett Favre, Rush Limbaugh, Elvis Presley, Carrie “Princess Leia” Fisher, Euro-American teenagers, etc. They do not want to bring extra attention to their drug of choice.

Euro-American media humanize issues that solely their own people. They don’t exploit it for ratings or punish the perps to the fullest extent of the law (see crack-cocaine vs. methamphetamine). Leaf and the other criminals doing prescription dope are “victims” to white media. Meanwhile, the media lynch mob continues its attacks on Vick. Just is what it is. Operation Nation will continue updating this story.

In the meantime, for those of you unfamiliar with Leaf and his NFL “career,” this video sums it up.

One thought on “Ryan Leaf Indicted (PDF); Hiding In Canada?”