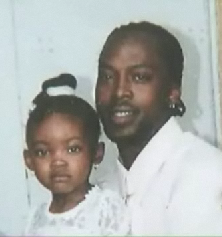 Marcus Smith leaves behind his fiancee, Kalonna LaCount and their three daughters.

Here is a summary of all the recent thug activity in the so-called Inglewood “police department” in case you are not current:

Michael Byoune, 19, was murdered on May 11, 2008 by Inglewood police thugs after they said Mr. Byoune was “gang affiliated” and “fired at them first.” No weapons were found in Mr. Byoune’s possession.

Ruben Walton Ortega, 23, was murdered on July 1, 2008, by Inglewood police thugs. The cops again said that Ortega was “a gang member,” and was “reaching for a gun.” L.A. County prosecutors cleared the police thugs of any criminal charges, saying they concluded the thug cops “honestly believed they were in imminent danger” to shoot Mr. Ortega five times.

Kevin Wicks, 38, was murdered on July 21, 2008 by one of the same thug cops involved in the aforementioned murder of Mr. Byoune, specifically Inglewood cop Brian Ragan. Wicks, a postal worker for 19 years before he was murdered, answered his door around midnight when police thugs showed up for an alleged “domestic abuse” call. Wicks lived alone and also lived in a not-so-safe neighborhood, and smartly answered his door with a gun in hand. The thug cops shot and killed him, saying, “he raised a gun at us.”

Eddie Felix Franco, a homeless 56-year-old man, was murdered after Inglewood police thugs recklessly fired 47 bullets, which also hit one bystander and killed a dog. The thug cops said Mr. Franco was reaching for a gun, which turned out to be a toy.

These four murders, along with Congresswoman Maxine Waters (D-CA) calling for and getting a Department of Justice investigation into the Inglewood PD, and several multi-million dollar wrongful death lawsuits, have not deterred Inglewood Police thugs and all other badged gangsters across the country from exercising their departmental policy right, which is “if you want a paid vacation, murder a black man.”

Mr. Marcus Smith, 31, and father of three daughters, became the latest victim of this disgusting vacation policy in U.S. police departments, on Sunday, May 17.

Predictably, Inglewood police thugs said Mr. Smith was armed with a gun and threatened them, even though several witnesses said otherwise. “Marcus had his hands in the air. He had no visible weapon and presented no visible threat to the police officers, himself or others,” witness Morris Griffin told the L.A. Sentinel. Smith’s 11-year-old daughter, Marqia, concurred. “My dad is not that stupid to pull a gun in front of the police. He would be the one to approach the police politely if there was trouble at the party,” she said. There are also several reports of the police laughing at the scene and roughing up women who were trying to comfort Smith after he was shot.

Though more B.S. rhetoric, protests, “training,” and empty promises will arise from this latest government-sanctioned murder, nothing tangible will come from Mr. Smith’s life being prematurely extinguished by feral pigs. In the end, the thugs got their wish of a paid vacation (a.k.a. all thug cops’ P.A.L. – “paid administrative leave”).

Police thugs are rewarded for murdering “blacks,” so why would they stop? They can always claim “qualified immunity” for any sort of liability. The kangaroo investigations into these murders for paid vacation last months, which means the killers relax and even take trips during their paid time off. All thug cops have to say is “he was involved with a gang” or “he has a criminal record,” and the Euro-American copsucking will public laud, love, and worship the cops unconditionally.

Inglewood badged gangsters have now joined Phoenix PD, Tempe (AZ) PD, Los Angeles PD, Oakland PD, NYPD, Cincinnati PD, and virtually all law enforcement in Confederate States as the most urgent terrorism threat in the United States. We all know nothing will happen to any of the murderers and Euro-American media will dismiss Mr. Smith’s murder as “black paranoia,” “the race card,” “blacks always feeling sorry for themselves,” and “he deserved it.”

A reward is a technique used to urge people to do something for money. As long as police thugs are rewarded paid vacations for murdering “blacks,” it will continue. Sadly, there is very little we can do about it, aside from war.