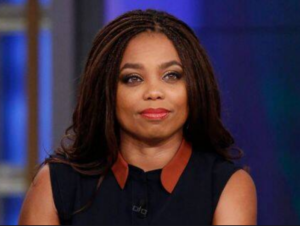 God bless Jemele Hill. It’s rare these days for black people to use their platforms to convey black-targeted messages. You’re not allowed to tell truth in “mainstream” media these days as a black man or woman.

Ms. Hill gained my respect (despite wide differences in our overall world viewpoints) when she made the obvious observation that Donald Trump is a racist POS while she was employed by ESPN. She also called for Dallas Cowboy fans to boycott the team’s advertisers after CEO Jerry Jones said he would bench any and all players who “disrespect the flag.” These deeds led to Ms. Hill being suspended by ESPN and ultimately her departure from the network altogether. She is now a staff writer at The Atlantic.

I received an email from an old friend a few days ago. It informed me about Ms. Hill first article with her new employer, entitled “It’s Time For Black Athletes To Leave White Colleges.” Ms. Hill has since faced the wrath of white America on social media. They accuse her of “promoting segregation,” “racism,” and a bunch of other crap. The whole ordeal even created some comedy. Ben Watson, the currently-suspended New England Patriots tight end, was invited to the Laura Ingraham show on Fox News. He was apparently supposed to play the obedient negro role on the show. When he did not, Ingraham abruptly cut him off.

I agreed with almost every point in Hill’s article too. That makes sense because on October 1, 2009, I published my article “Fortifying Confederate Armies: Black Athletes and SEC Football.” Ms. Hill makes two primary arguments, spoken from a female, mainstream, filtered perspective. The first is that white people are making billions of dollars off the free labor of black athletes. The second is that as a result of this, black athletes should not go to these white schools and instead attend historically black colleges and universities (“HBCU’s”). I made the exact same arguments, except from the unfiltered, unapologetic perspective of a black man in America. It’s the same ideas articulated in slightly different ways.

Alabama’s athletic department generated $174 million in the 2016–17 school year, whereas the HBCU that generated the most money from athletics that year, Prairie View A&M, brought in less than $18 million.

According to a 2002 study by Illinois State University researchers James C. Palmer and Sandra L. Gillian, the discrepancies in state funding for public HBCUs and HECUs are ridiculously slanted. That academic year, $211 million was allocated to the historically European University of Mississippi, while its HBCU counterpart, Alcorn State, was appropriated only $27.1 million in state funding. That averaged out to a $24,000 per-student allocation at “Ole Miss,” and a $12,000 per-student allocation at Alcorn State.

Ms. Hill notes that many NFL greats, like Jerry Rice and Walter Payton, attended HBCU’s and went on to NFL and life greatness.

I noted how Walter Payton and Jerry Rice went to HBCU’s, and went on to NFL and life greatness (screenshot below). 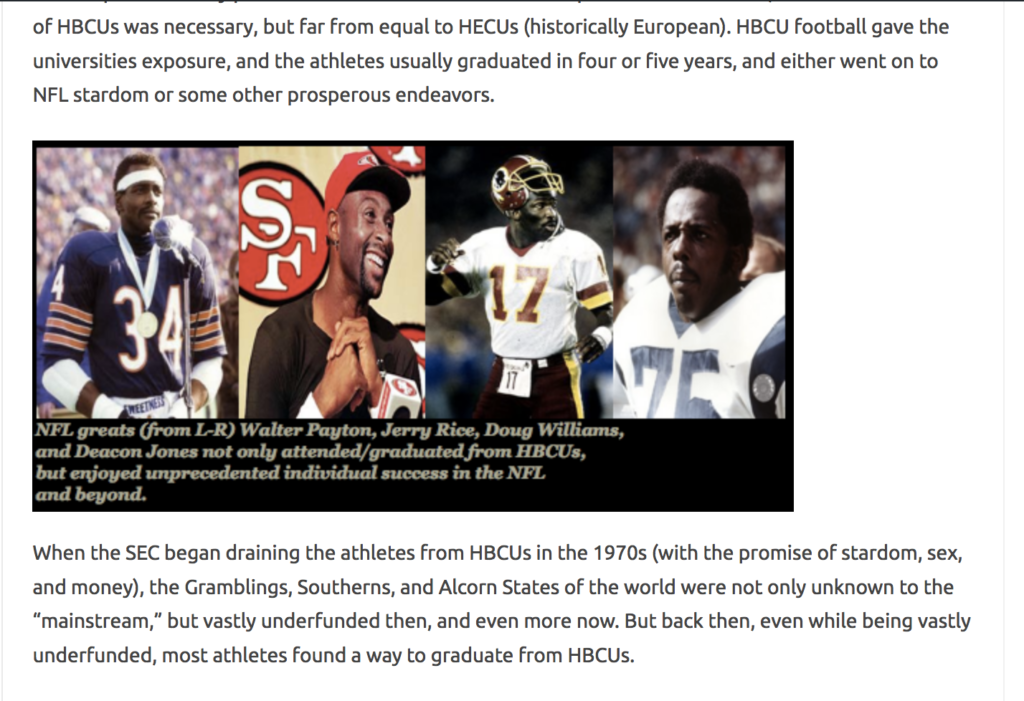 Jemele Hill, citing an article in The Chronicle of Higher Education, notes that black athletes should go to HBCU’s because the graduation rates are higher than at white schools.

Perhaps partly for this reason, black students’ graduation rates at HBCUs are notably higher than black students’ at other colleges when controlling for factors such as income and high-school success.

However, the article she cites measures all HBCU students, not just the athletes. I also noted graduation rates in my article, but made an observation that Ms. Hill did not.

HBCU’s now also lack the exposure their campuses used to get when the Walter Payton’s, Jerry Rice’s, and Deacon Jones’ of the world attended. HBCU’s are quickly becoming just as inept at graduating its students than HECUs. In other words, its a vicious cycle of “go to the NFL, or sling crack back in the hood.”

I noticed an uptick in traffic to my 2009 “Fortifying Confederate Armies” article last week. It had been shared somewhere on Facebook and Twitter. That always seems to happen when college football season starts. The truth is that Jemele Hill’s article has a lot of similarities to my article written ten years earlier. She calls white schools predominately white institutions (“PWIs”). I call them HECU’s (historically European colleges and universities). Tomato, tomăto; potato, potăto…you get the picture.

None of Ms. Hill’s ideas in The Atlantic article are original. I wouldn’t go as far to call it prima facie plagiarism. But the Isley Brothers won $5 million from Michael Bolton for plagiarizing the song “Love is a wonderful thing.” Granted Google shadow-bans this website because they don’t like unapologetic truth spoken by black people. But Jemele Hill must have come across it in her research and could have at least mentioned my article in hers.

Regardless, I’m happy the subject matter has come up again. Black athletes are making NCAA white executives and coaches billions of dollars off their blood, sweat and tears. That’s called slavery, which allegedly ended with the ratification of the 13th Amendment. NFL athletes are still not properly compensated with those toilet paper “contracts” that are as valid and binding as Donald Trump’s word.

The Jemele Hill article is informative and important. But none of it is her original thoughts and ideas. There are many different words for that. But I’ll let the general public decide what word to use.

This article was also submitted as a Letter to the Editor on The Atlantic website.