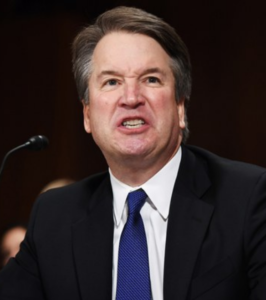 The New York Times published a story yesterday after a 10-month investigation into U.S. Supreme Court justice Brett Kavanaugh. According to the story, Kavanaugh “pulled down his pants and thrust his penis at her, prompting her to swat it away and inadvertently touch it.” The “her” is fellow Yale student Deborah Ramirez. The alleged incident happened in 1983.

Max Stier, another classmate, saw Kavanaugh “push his penis” into the hands of an unwittingly female student, according to the story. The FBI was reportedly alerted of the incident. But no investigation occurred. Of course these accusations come after Christine Blasey Ford testified in front of the Senate Judiciary Committee last September. She also accused Kavanaugh of making unwanted sexual advances in the 1980s.

There’s no question that Kavanaugh is a low-life scum bag. He’s been a rich, over-privileged whiteboy his whole life. The accusations are likely true based on the sheer number of them. But white privilege allows him to sit on the nation’s highest court. Kavanaugh should be removed from the bench for lying to Congress, or because he was appointed by an illegitimate President. The accusations, like many of these #MeToo stories, are from decades ago. It reinforces the idea that any woman can randomly #MeToo any man she dislikes based on hearsay. #MeToo, however, excuses sexual assault when the proof is in the pudding and the assailant is one of their own. 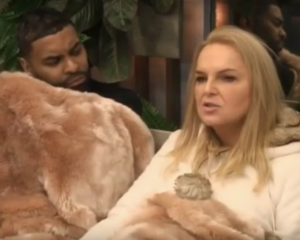 There are two commonalities with all #MeToo cases. The accused are usually high-profile black men and the allegations happened decades ago. Attorney Gloria Allred and her daughter Lisa Bloom have monetized this “movement” and made millions from it. They use that very unattractive black woman as their mascot that apparently legitimizes the agenda of attacking high-profile black men.

The Allred’s target black men like Bill Cosby and R. Kelly. They protect their Zionist brothers like Harvey Weinstein. Selective outrage is also a trait for the hashtag group. The singer Moby admitted to doing the exact same thing as Kavanaugh in his own book. He received no backlash from the hashtag cult. Another white male sexually assault a high-profile black man on television just nine months ago. The reactions by #MeToo and LGBT clarified their obvious agendas.

The rapper Ginuwine was a cast member on “Celebrity Big Brother UK.” A guy name India Willoughby, who “identifies as trans,” sat next to Ginuwine on a couch. The long-haired creepy whiteboy asked Ginuwine, “you go out with a woman, but not a transgendered woman?” He replied “no.” Willoughby continued to press. “I’m a woman, so you would date me then. Let’s have a kiss,” Willoughby said. Ginuwine, again, said no. He also showed incredible restraint not to physically defend himself against the assailant.

What happened next was the epitome of surrealism. The assailant was branded as a victim by the alphabet cult on Twitter and in mainstream media. Ginuwine was labeled “transphobic” and “homophobic” for not practicing homophilia. He was branded a “bigot” because he did not allow a man to sexually assault him. #MeToo was completely silent. The alphabet cult expects everyone to deny reality and live in their demented fantasy world. It’s the same as the Donald Trump cult expecting everyone to believe the constant lies coming from the White House.

Is there hope in America?

Americans are growing tired of their intelligence being insulted. #MeToo and the random, decades-old accusations are causing men to walk on egg shells in the workplace in the 21st century. Consequently, guys are afraid of being the next #MeToo.

Most of these people “concerned” about sexual assault have ulterior motives. Kavanaugh is unfit for the U.S. Supreme Court because he lied to Congress. What he allegedly did in the 1980s, the decade of the “Porky’s” and “Meatballs” movie series, is irrelevant. Meanwhile a man called “trans” sexually assaulted another man on television just nine months ago. They attacked the victim. They lionized the assailant. #MeToo was silent. That’s all you need to know.

Money and agendas fuel the selective outrage related to sexual assaults. All you can do as an individual is continue living in reality and weather the perpetual subterfuge storm.