UPDATED 11/1/2010: Winn Parish Coroner Was Not Allowed In The Courtroom

Those of you who simply CHOOSE to believe what you’ve heard come from this “not guilty verdict” of killer cop Scott Nugent may stop reading. For those of you interested in the true chain of events, listen up.

The OP-NAT EYE has now learned, from a source very close to the trial, that Winn Parish coroner, Dr. Randolph Williams, was not allowed to step foot onto the property of the Winn Parish Courthouse which Nugent’s trial was held. The OP-NAT EYE has also learned that it was in fact District Attorney R. Christopher Nevils who banished Dr. Williams from the premises for the duration of the trial, likely under the threat of prosecution for manufactured crimes. You may re-call that Dr. Williams, a few months after Mr. Pikes was murdered by Nugent, ruled the death a homicide. In fact, the death certificate for Mr. Pikes lists his cause of death as “cardiac arrest following nine 50,000 volt electroshock applications from a conductive electrical weapon.” These facts were never introduced as evidence by Nevils and never even mentioned at the trial period. (see video of Dr. Randolph’s conclusion at the “RELATED LINKS” below).

The plot thickens from here. The Winnfield Police Department started using Tasers in 2007. By the time Nugent murdered Mr. Pikes, less than a year later, the department as a whole had used the electrocution devices 14 times during arrests. Of those 14 times, 12 of the victims were “black,” and, surprise-surprise, Nugent was the trigger man in 10 of the 14 incidents. In other words, 71 percent of the time someone was tasered by Winnfield Police in the first year they had the weapons, Nugent was the assailant.

And now to this “trial” that just concluded last week. This judge who presided over the proceedings, John R. Joyce, somehow allowed the prosecutor, Nevils, to openly advocate for the defendant, as opposed to doing his job, representing the victim’s family. This may be the first time in history (that Confederate courts let slip through the media cracks) that a prosecutor wanted a jury which would favor an acquittal of the defendant in the case. Nevils clearly stated he did not want any “black” jurors seated because they were all “tainted.” “Judge” Joyce let this unconstitutional violation of due process slide, and sat a jury which would follow the strings pulled not only by the defense, but also the state.

And finally, we get to the defense’s tale as to how Mr. Pikes died, even though the coroner long ago ruled this a homicide. Jerry Glas, another TASER International employee (several testified on Nugent’s behalf), said Mr. Pikes died because “his red blood cell began sickling” (note: thetowntalk.com link now defunct) when he “decid[ed] to run from police.”

Glas not only made his employers happy, but simply assumed that casually mentioning sickle cell anemia, a disease which predominately effects “black Americans,” would switch the mental focus of the jury from murder to “black disease.” This would have been similar to Johnnie Cochran arguing that Nicole Brown Simpson and Ronald Goldman died from sunburns, since only pale-skinned people get them. But forget all that for a second…the official police report itself mentions nowhere that Mr. Pikes “resisted arrest,” which is simply a cop-out charge (pun-intended) police thugs use to cover assaults, murders, and other malfeasance.

So here’s the summary: the coroner, who sought the opinion of two nationally renowned forensic pathologists before releasing his report, ruled Mr. Pikes’ death a homicide. Mr. Pikes’ death certificate says he died from electroshocks. Thug Nugent has been the triggerman in a vast majority of all Taser incidents in Winnfield. The prosecutor violated the Fourteenth Amendment by advocating for a jury which favored the defendant. But TASER International said the death was caused by “sickle cell,” which convinced Nevils hand-picked jury of a not-guilty verdict.

Nevils (“the State”) can appeal the not-guilty verdict, basically by admitting his cahoots with “Judge” Joyce, the defense team, and the payoff from TASER he likely received. We will continue updating this story until the U.S. Attorney for the Western District of Louisiana, Stephanie A. Finley, and/or the U.S. Attorney General charges Nugent with capital murder, Nevils with criminal misconduct, and Joyce with aiding and abetting; and eventually charge the other two police thugs involved in Mr. Pikes murder as accessories. We’ll do our best to aid in speeding this process up. 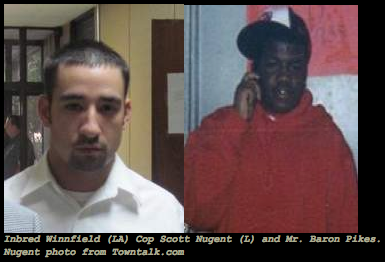 It was so predictable from the beginning, you have to wonder why these Confederate “justice systems” bother wasting tax dollars holding kangaroo court proceedings.

As fully expected, a Winnfield, Louisiana jury acquitted bitch whiteboy cop Scott Nugent of any and all charges this afternoon, after the trial had been delayed numerous times. Though the January 17, 2008 murder of Mr. Baron “Scooter” Pikes by the inbred cop was blatant, wanton, and caught on tape, the jury, likely all-“white,” acquitted him anyway. The prosecutor (yes, the guy who brought the charges against Nugent) said “all ‘black’ jurors were tainted” and thus would not be good jurors, and apparently got his wish. There may have been one Juan William-type “black” juror, since one of them did in fact vote for a guilty verdict.

Thug Nugent tasered Mr. Pikes, who was in handcuffs, 14 times in nine minutes, while other inbred whiteboy cops around him were yelling things like “are you on crack nigger” and several other slurs which make them feel better about themselves. All of this was caught on tape, but this still did not matter in the Confederacy. The jury leaned on the word of “expert” witness Mark Kroll, who is an employee at Taser International, as their excuse for setting a brutal murderer free. Kroll said the nine Taser shots did not kill Mr. Pikes and continued, “[Taser shots] hurt, but there’s zero negative effect on the body.”

There is nothing more to say. If we want justice, we have to take it ourselves, and this inbred cop better keep that in mind. It will always be legal in the USA for “white” people to kill “black” people, especially in the Confederacy. This acquittal will inevitably be celebrated by inbred Euro-Americans and expect “O.J.” to come up frequently in comparison

Arm yourselves now, pursuant to the 2nd Amendment of the U.S. Constitution and NATURAL UNALIENABLE rights to self-defense, if you haven’t already brothers and sisters.