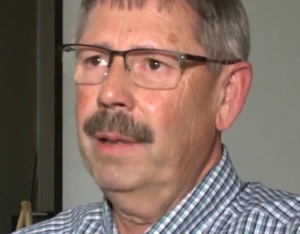 Watching and listening to Bella Vista (AR) Police Chief Ken Farmer weasel his way through direct questioning about the kangaroo investigations allegedly being conducted by Arkansas State Police and his department, was like watching Ari Fleisher attempt to justify George W. Bush’s “Presidency.”

“Investigations” are entering week eight, and still, there has been zero official comment or explanation about the cold-blooded murder of Mr. James Patrick Ahern back on Jan. 20, at the hands of currently-vacationing Bella Vista thug cop Coleman Brackney.

OP-NAT commenters have kept the murder up-to-date and fresh in the minds of the Arkansas public. While media in northwest Arkansas have done their customary best to report on local police, without disturbing that fragile media/cop relationship. From KFSM TV-5 In Fort Smith, AR.

But the case may soon reach a larger segment of the country.

Operation-Nation has learned from multiple sources that the FBI is likely to take over the investigation, because the information given to them by Bella Vista Police has been inconsistent with the reality of the case.

Two separate sources have told us that the FBI received false information from Chief Farmer about the facts of the case. Farmer and the Arkansas State Police told the FBI that “no witnesses” saw what happened that night. I guess Farmer forgot about all the witnesses who spoke with media after the murder took place.

If the FBI can quickly makes a common sense determination (as opposed to an elongated “cop” determination) that the BVPD and Arkansas State Police are blatantly and arrogantly lying, this investigation should become federal within the next week. But don’t bet on it. We predicted the inevitable “justified” result of this murder would come within 10-16 weeks after Mr. Ahern’s death, so Farmer and the boys are still right on schedule. I assume the “results” will be released by the end of this month, so to avoid federal takeover of an active State investigation.

We’ve had several Bella Vista residents tell us that they are being forced to move out of town for their own safety, as the police thugs there are targeting witnesses and anyone who has spoken up about the murder. Remember: Americans are supposed to blindly accept what the government is doing to its own people.

Though it is nice to put one of these police terror organizations on notice, it is still an extreme longshot for any serious charges to be pressed against the Bella Vista killer cop, Brackney. The United States simply does not punish this sort of behavior, and instead rewards it with paid vacations and positive press coverage. The FBI could make a statement of support to the American public by taking over this case, which makes the latter all the more unlikely.