Confederate justice is well underway in the “manslaughter” trial of Winnfield, Louisiana killer cop Scott Nugent, which jury selection started this past Monday. District Attorney R. Christopher Nevils filed a motion to change the venue of the trial, wanting to move it to the “whitest” jurisdiction possible. Nevils wrote that all potential “black” jurors are “tainted” because of pre-trial publicity of the January 17, 2008 cold-blooded murder (Note: thetowntalk.com link is now defunct).

The motion also asks the Court to prevent the jury from seeing the video of Nugent and several other Winnfield police thugs tasering Mr. Pikes nines times in 14 minutes, while spewing taunts like “are you on crack nigger.” Watch a CNN video from 2008 which the coroner describes the tape and the circumstances of Mr. Pikes murder.

Judge John Joyce, who sealed the tape into evidence back in February, will decide on Monday if the tape can be shown to the jury during the trial. It’s obvious the only thing the tape will show is that this was a brutal murder executed by inbred Confederate cops.

We can only hope that Joyce is one of the those extremely rare Southern judges with integrity and who is not inbred. However, we fully expect the motion to change venues to be granted, and will not speculate on the tape, and the jury being able to view it. We will just wait and see.

Though we already know that somehow savage terrorist Scott Nugent will be acquitted of all charges by an all-“white” jury if/when this trial ever takes place, yet another delay seals the inevitable result. According to several sources, Nugent defense attorney’s requested the continuance and it was granted; with a trial date now set for June 14.

Also, in a poorly written article on ABC26 in New Orleans which gets many facts and dates pertaining to the murder completely wrong, Winn Parish Asst. District Attorney R. Christopher Nevils is now saying that there are no “racial slurs” contained in the tape of the murder. (Note: ABC26 link is now defunct: https://wgno.com/news/local/wgno-news-taser-slur,0,3636887.story/) 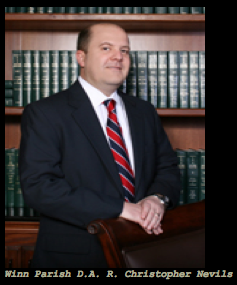 The tape has been in the possession of Winnfield Police for over a year and has almost certainly been edited several times. It appears Nevils may be in the pocket of Nugent, his defense team, and Confederate principles. Not that anyone expected anything different. We’ll keep updating if any new breaks from this story.

Though we can almost guarantee that information regarding the trial will be hard to come by, we will have the day-by-day, play-by-play updates beginning tomorrow of what should be be a cut-and-dried future conviction for thug Nugent. But this is the USA, where “a black” can be murdered on tape and the killer gets rewarded with a paid vacation 99.99999% of the time. Brothers should just loke up and castrate this savage police thug, and Taser the leftover patch nine times in 14 minutes. We’ll continue to update.

After several stall tactics by the Louisiana judicial system, thug cop Scott Nugent will finally face a judge and jury more than two years after murdering Mr. Baron Pikes. Based on how Homer, LA thug cop Tim Cox was recently cleared of any and all criminal charges for the murder of 73-year-old Bernard Monroe last year, you can expect Confederate justice to prevail with Nugent too. We predict complete acquittal for Nugent, as a jury will somehow find tasering someone nine times “justified cop duty.”

How ironic is the fact this town is only about 45 miles away from Jena, Louisiana? What’s even more ironic is the fact the young victim, 21-year-old Baron “Scooter” Pikes, was the cousin of Mychal Bell, one of the young men who spent nearly a year in a Confederate concentration camp as an underaged minor, on malicious charges Louisiana persecutor Reed Walters tried to push through. 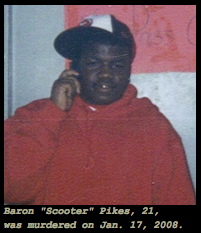 Former Winnfield Police thug Scott Nugent used a Taser nine times in 14 minutes on Mr. Pikes, while the young man was handcuffed. The final two blasts from the 50,000 volt weapon was simply sick entertainment for Nugent, as Pikes was likely dead after the first seven shots, according to Winn Parish coroner Dr. Randolph.
The coroner also completely debunked the police report, saying there was no sign of PCP or cocaine in Mr. Pikes’ system, contrary to what the cops told the public. And even if there was drugs in his system, being tortured to death is not the punishment for it. Here is an interview with a Chicago Tribune Reporter and a Winnfield Police spokesperson from Democracynow.org.
Of course Nugent was granted bond; $45,000, which the thug promptly paid after spending less than one day in jail. Nugent is miraculously only facing manslaughter and “malfeasance” (misconduct by a public official) charges, with the maximum penalty being 45 years in prison. 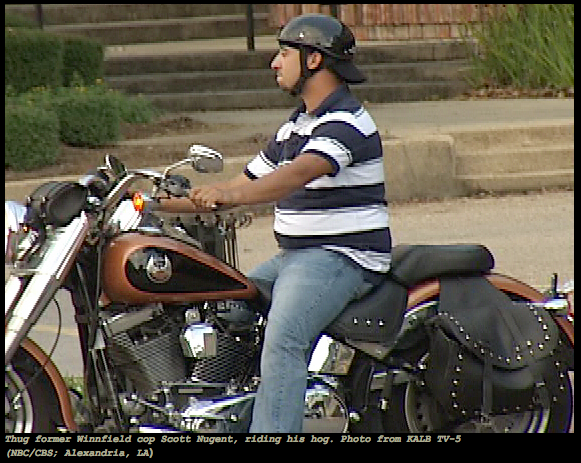 Reasonable, decent people can only pray the killer gets the maximum 45 year sentence, being the death penalty is never applied to thug police; nor is any other penalty for that matter when it comes to murder and manipulation by badged gangsters of “blacks.”

Generally the “penalty” is “paid administrative leave” and ultimately an acquittal of all charges. Nugent will very likely be acquitted in that same Louisiana town where former Winn Parish district attorney Terry Reeves committed suicide after being investigated for embezzlement and extortion. Winnfield Police Chief Johnny Ray Carpenter is also a convicted felon who received a pardon from former Louisiana governor Edwin Edwards, who himself is currently in prison for racketeering charges.

Seems these “good ‘ol boy” networks are common throughout the country. Rest In Peace, Mr. Pikes. The war is just beginning.