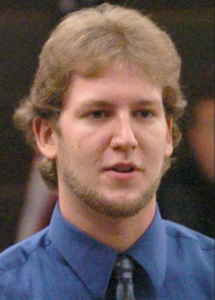 Mr. Derek Copp and his roommate were studying, and minding their own business in their apartment just south of Grand Valley State University in Allendale, MI, On March 11. Ottawa County, Michigan police thugs, known in the area as the “West Michigan Enforcement Team” (WEMET), entered Derek’s apartment around 9pm that night. The thugs had obtained a search warrant to look for narcotics. The shooter shined a bright flashlight into Derek’s eyes, which naturally made him try and cover his eyes with his wrist from the bright light. Before Derek even knew what was happening, the trigger-happy police thug fired one shot, striking Derek in his chest.

The 20-year-old student spent the next 8 days at Spectrum Health Butterworth Hospital, being treated for two broken ribs and a punctured lung. He was released on March 19. Derek was never charged with any crime. Of course, the POS cop who shot this young man was rewarded with a paid vacation, aka PAID ADMINISTRATIVE LEAVE.

The thug cops ultimately found out that Derek likes to smoke weed and had a small amount of marijuana in his apartment. Derek’s parents described their son as a “today-hippie” and a “peace loving guy.” The good news is that Derek survived the attack by an Ottawa County police thug, who’s name is still being protected by his bosses.

Copp is a film student and says he may use his experience for future movie endeavors. Yes, marijuana is illegal. But did this young man deserve to be shot because he likes to smoke a plant? President Barack Obama said he would possibly legalize the plant when he was campaigning for the U.S. Senate in 2004.

Of course he had to start pandering to certain voters and changed his tune while running for President. Decriminalizing marijuana would not only cut all the recently publicized “drug violence on the Mexican border” by at least 75 percent, but the plant could be taxed just like cigarettes and alcohol, thus stimulating our economy and helping pay down trillions of dollars in U.S. debt.

There has been an outpouring of support for Copp from college student all across Michigan. Operation-Nation will continue to follow the story, though we can tell you now thaty the thug cop will face no criminal charges and likely not even face any sort of reprimand from band of badged gangsters. But that is the way of our police state called the USA. Derek is thankfully recovering well, and in good spirits.