White racist thug cops will always have endless opportunities in this country. All bad karma that comes the way of Powell is deserved.

We’re not stupid. Punk Powell was given the option of either being fired or resigning. The final straw was likely the proactive bloggers who took snapshots of this little punk’s Myspace and Xanga blog. He stated, “I can now kill people legally” after becoming a cop in 2006. This kind of monkey behavior happens everyday with thug police. But this incident happened to effect a rich NFL football player.

All Americans are advised to carry digital recorders and cameras if you can afford them. This bitch would still be working for the Dallas PD if he wasn’t caught on tape. Read his resignation letter HERE.

The Dallas Morning News is reporting another NFL player’s family endured the monkey behavior of punk Dallas cop Robert Powell. Maritza Thomas, the Latina wife of free-agent NFL linebacker Zach Thomas, said she was pulled over by Powell on June 28, 2008. She allegedly made an illegal U-turn. Powell issued Mrs. Thomas FIVE tickets, handcuffed her, placed her in the back of the cop car, and made her sit in jail for three hours. Again, this was over traffic tickets. Four of the five tickets were ultimately dismissed.

If this chimpanzee still has a job by the end of April, it proves the United States supports, aids, and abets thug police. Fire this punk IMMEDIATELY, Chief Kunkle. 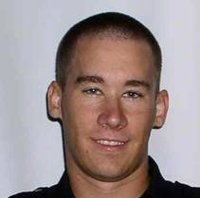 PLANO, TX — By now, many of you know the story. NFL running back Ryan Moats drove to a Plano hospital to see his dying mother-in-law on March 18. Here is the video showing the feral monkey acts by punk Dallas (TX) cop Robert Powell.

Powell attorney apologized for this disgrace of a human being. The phony, P.R. stunt is aimed towards helping thug Powell keep his job. Here is the text of the phony apology:

I wish to publicly and sincerely apologize to the Moats family, my colleagues in the Dallas Police Department, and to all those who have been rightfully angered by my actions on March 18, 2009. After stopping Mr. Moats’ vehicle, I showed poor judgment and insensitivity to Mr. Moats and his family by my words and actions. With great remorse I accept my responsibility for adding to their grief in an already difficult time. I have attempted to reach Mr. Moats to express my personal condolences directly to his family and my regret about my actions. While these efforts have been unsuccessful so far, I hope we can talk soon. Again, I am very sorry for what I did and ask for the forgiveness of all those touched by these unfortunate events.

The only thing Powell is sorry for is getting caught on tape being an inbred POS. This kind of behavior is common among power-drunken cops. This incident is getting attention because Mr. Ryan Moats is a famous NFL player.

All Americans should carry a digital recorder in their cars in case you are harassed by one of these animals. Mount (or tape) the recorder on your driver side door. Whenever a cop pulls you over, immediately press the record button and do not stop until you pull away. This story would not have been told without the audio and video evidence. Camcorders are also recommended if you an afford one.

Dallas Police Chief David Kunkle immediately stepped forward, apologized and condemned the actions of this animal. Kunkle, took over command of the department in 2004. He fired 30 rogue cops in his first two years at the helm. Kinkle has fired a total of 62 police thugs in his time, with 12 of the firings being reversed. Give him credit for making genuine efforts to clean up a cesspool police organization.

It seems Chief Kunkle recognizes retaining Powell will destroy all the work and effort he has put into cleaning up the department the past four years. Powell needs to be fired and never work as a police officer again. End of story.