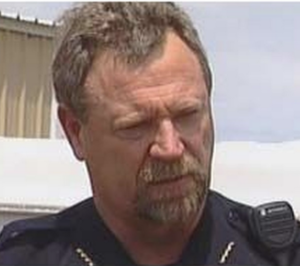 The lengths thug cops will go to in order to use their federally-mandated electrocution toys have no more new heights to reach.

Miss Kailee Martinez, a 14-year-old girl, got in a fight with her mom on July 2. Her mother, Stacy Akin, obviously wanted to send a message to the young lady, so he drove to the Tucumcari Police Department, thinking the cops could maybe scare her daughter into learning some manners and respect for not only her parents, but her other adults as well. Upon arrival at the police station, Kailee ran to a nearby park to hide. This is where Hatcher’s chimp-out session began. 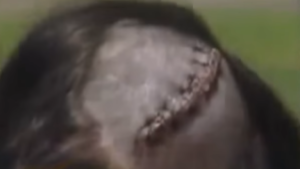 Kailee needed 18 staples to close the gash from the Taser strike to her head and needed surgery to remove a stick that pierced through her face when we fell to the ground. Here is a news report from KRQE 13 News in Albuquerque.

Thug Hatcher told Newschannel 10 in Albuquerque that he “does not regret his action,” that he “had no choice” but to electrocute the 14-year-old girl, and had a “lawful reason” to do so. Of course Hatcher was given his paid vacation (aka “paid administrative leave”), which is routine when thug cops assault and/or murder American citizens.

The good news is that an outside fact-finding body, Robert Caswell Investigations, is conducting the probe into the obviously malicious acts by Hatcher, according to the Albuquerque Journal. The bad news is that he’s still a COP (constitutionally-protected) thug and will likely not face any charges. Meanwhile Kailee’s family has hired a lawyer, as they are accumulating thousands of dollars in medical expenses and will likely sue the city.

Regardless, a civil lawsuit which Kailee’s family will likely get less than $150,000 after lawyer fees and medical bills, does not justify this rabid assault on a child. Sure, Kailee was being bratty, but you don’t Taser a child (or an adult for that matter) to discipline them. The way society is set up nowadays though, kids have more power than adults in far too many households.

If Kailee grew up in the 70s and 80s, like I did, her mom (or preferably her dad) would have whooped her ass when she was younger, and this incident would have never happened. Still, Ms. Akin thought she could trust her local police to help discipline her daughter, which was a mistake. She now knows, like millions of others have also learned the hard way, to never call police for ANYTHING. Hatcher should be charged with aggravated assault with a deadly weapon, but again, he’s a thug cop and constitutionally protected from criminal prosecution.

Kailee’s actions, in fighting with her mom, are unacceptable, however her mom and family need to deal with that. Thug Hatcher’s actions are criminal and the justice system needs to deal with that. But the truth is, Hatcher will be right back on the streets after his paid vacation and not face any charges. Operation Nation will keep you up-to-date and let you know when the county prosecutors say no charges will be filed.