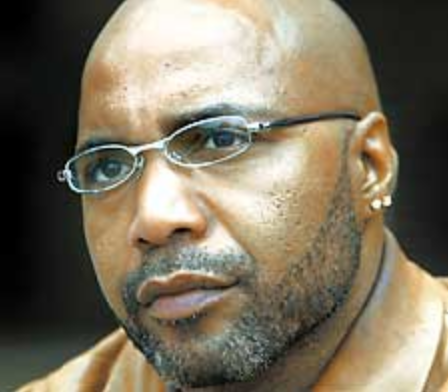 Mr. Terry Harrington (pictured), along with Mr.
Curtis McGhee spent 25 years in prison for a
murder they did not commit.

This case seems constitutionally cut-and-dried and should be affirmed by our highest court. But the pathetic political makeup of the Supreme Court may see it another way. The Pottawattamie County case tests the Eleventh Amendment. It will define “absolute immunity” and how it applies to state and federal prosecutors. The SCOTUS will determine if procurring and using false evidence and testimony during a prosecution is a violation of due process. Again, seems cut-and-dried.

This case involves Mr. Curtis McGhee, Jr. and Mr. Terry Harrington. They were both convicted in Pottawattamie County Court (Council Bluffs, Iowa) for the murder of retired cop John Schweer in 1978. They were each sentenced to life in prison. A prison barber named Anne Danaher got into a conversation with Mr. Harrington’s family in 2002 outside of the Iowa State Penitentiary after they had visited Mr. Harrington. McGhee and Harrington’s fates changed from there.

Danaher felt that there was more to the story than prosecutors presented at trial. Danaher, for no other reason than genuine caring, discovered police reports which prosecutors David Richter and Joseph Hrvol withheld from the defense. These reports contained evidence of another possible suspect. Hrvol and Richter also presented false testimony at trial that aided in Mr. Harrington and Mr. McGhee’s convictions.

When this information was presented to the Iowa Supreme Court, the convictions were overturned. Then-governor Tom Vilsack granted Harrington bond and he was released from prison in April of 2003 while prosecutors decided whether they would retry the men. Pottawattamie County attorney Matthew Wilbur, realizing his old comrades were busted, ultimately dropped the charges against Harrington and sentenced McGhee to time served, finally freeing him from prison in November of 2003.

The two men had 25 years of their lives stolen from them by thug prosecutors looking to convict two black teenagers by any means necessary. McGhee and Harrington filed a federal civil lawsuit against Pottawattamie County and prosecutors Hrvol and Richter alleging the prosecutors violated their due process rights by fabricating and using false evidence against them. The lawsuit also claimed the State withheld potentially exculpatory evidence.

Hrvol and Richter, of course, played their “absolute immunity” card in the U.S. District Court of Southern Iowa, and motioned for summary judgment. They said they cannot be sued because they are almighty prosecutors. The district court stunningly disagreed and denied their motion.

Richter and Hrvol appealed to the Eighth Circuit Court of Appeals which found “immunity does not extend to the actions of a County Attorney who violates a person’s substantive due process rights by obtaining, manufacturing, coercing and fabricating evidence before filing formal charges, because this is not “a distinctly prosecutorial function.” Curtis McGhee, Jr. v. Pottawattamie County, 8th Cir., 2008.

Now it is up to the United States Supreme Court, after it granted certiorari on April 20, to decide one simple question: is fabricating evidence and using it against a defendant a “prosecutorial function” which would entitle the perpetrating prosecutor to “absolute immunity?”

Many of you who follow this blog know my story because you’ve read many of the “55 Days In Maricopa County Jail” entries and/or watched the video. However, when a federal judge denied me habeas corpus, I was forced to exhaust “Rule 32” proceedings (which I commenced on June 19) before a federal judge will hear my case. “Rule 32” is Arizona’s “collateral attack” method for post-conviction relief. Though there were at least five constitutional rights of mine violated throughout Maricopa County’s quest to play nigger-criminal games with me (all of which require reversal of conviction), there is one which is more disturbing than the others.

Maricopa County prosecutor Lynn Krabbe lied in several court documents; first saying there were “multiple [alleged] victims” and saying I had a prior criminal charge of “obtaining a fishing license by fraud,” both of which are blatantly false.

RELATED: You Decide – My Pro-Se Petitions in the Arizona Supreme Court

Lets not forget Maricopa County prosecutor Heather Wicht, who is still trying to imprison Mr. Rodney Smith Jr. She is currently withholding the fact that she is the prosecutor who allowed the thugs who attacked Mr. Smith previously, to be set free, only to attack Mr. Smith again. There is also no telling what kind of bull Wicht told the grand jury in Mr. Smith’s case.

Prosecutors have, for too long, lied and blatantly fabricated evidence to convict innocent people so said prosecutors can maintain a high wining percentage. Justice does not matter; only wins. Not only should the Supreme Court affirm the Eighth Circuit’s decision in Pottawattamie v. McGhee, but it should also make it criminal for prosecutors to knowingly deprive American citizens of life and liberty without due process (though we know that won’t happen).

The threat of facing lawsuits at the same rate of inbred thug cops like Maricopa County Sheriff Joseph M. Arpaio, would definitely make prosecutors think twice about lying and fabricating evidence to further their “winning percentage.” This is an all-to-common practice in U.S. court systems. If the U.S. Constitution means anything, Pottawattamie will be affirmed and Americans would then have at least some leverage in forcing prosecutors to DO THEIR JOBS without malice. If the Supreme Court reverses this decision, they are effectively saying that state prosecutors can go to any lengths, including lying and fabricating evidence, to convict American citizens, even if their acts violate the Fifth and Fourteenth Amendments.

We’ll see if the Constitution actually means anything anymore, or if it is just a piece of paper cited when people want to feel “patriotic.”

RELATED: Eleventh Amendment is Unconstitutional; Must Be Repealed