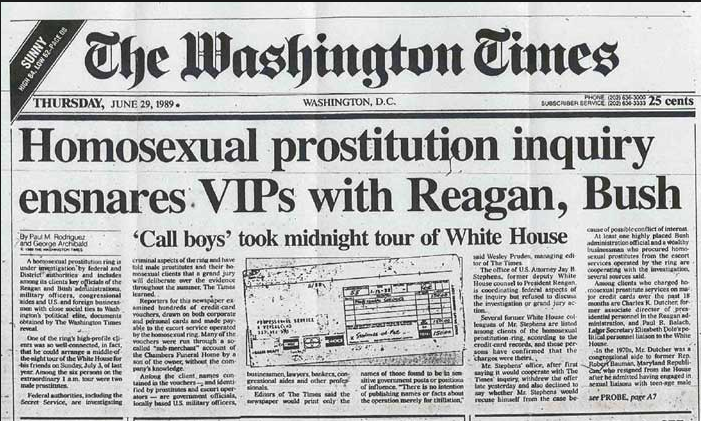 This article, published in the ultra-“conservative” Washington Times on June 29, 1989, was the spark in a fire quickly extinguished by the Secret Service, FBI, and state-run media.

Everyone knows the GOP is the party of and for rich Euro-American males and their sheep; and that the Democratic Party is the party of homosexuals. In fact to be elected in today’s edition of the latter, you must openly and vehemently view homosexual as some divine race or ethnicity of people, similar to Zionist worship in the USA. We’ve covered what it takes to be elected as a Republican in this society. But are Democrats simply the openly homosexual party, while the GOP keeps their desires “in the closet?”

UPDATED April 10, 2020 – For those of you too lazy to read, this gentleman at Zolna Report reads most of this article in its entirety in the following video.

Former President Ronald Reagan is the hero of  Republican politicians nowadays. He is essentially the re-incarnation of Jesus Christ himself to Republicans. Everything this guy did in the eyes of Republicans was perfect, including his policies on the business of private prisons. The U.S. prison population grew from under 500,000 in 1980 to more than 1.2 million by the time Reagan left office. So naturally the GOP also supports Reagan hosting parties at the White House, complete with call-boys as young as 10 years old.

The foregoing Washington Times article was published on June 29, 1989. It reported on a late-night White House soiree on July 3, 1988 that included two male child prostitutes. You can read the entire article yourself here. A federal investigation was coordinated by then-U.S. Attorney Jay B. Stephens. He also served as deputy counsel to President Reagan, and is currently senior vice president and general counsel for Raytheon Company. The obvious conflicts of interest mattered not. Stephens focused the entire investigation on credit card fraud and the ringleader of the D.C. call-boy ring, Henry W. Vincent.

Watch Tom Brokaw and Connie Chung’s quick reports about the Washington Times article. The reports are followed by a short clip from the documentary “Conspiracy of Silence.” It details the call-boy rings of the Reagan and Bush I Administration.

The aforementioned documentary was scheduled to air on the Discovery Channel on May 3, 1994. It was even listed in that week’s edition of TV Guide to air that night. But state-run media will always protect its own. The program was never broadcast. According to reports, several members of Congress forced the Discovery Channel to pull the plug on “Conspiracy of Silence” completely. You may now watch the entire video here.

The clip above starts with John DeCamp, a former Republican state senator from Nebraska, interviewing Paul Bonacci, one of the under-aged call-boys who attended the July 3, 1988 White House party. But the story is difficult to tell without starting from the beginning. We’ll summarize it herein. But check out Mr. DeCamp’s book The Franklin Coverup: Child Abuse, Satanism, and Murder in Nebraska for the whole story.

Lawrence E. King was a prominent Omaha, Nebraska Republican in the 1980s. He was considered by many as a “rising African American star” within the party. King was a Democrat in the 1970s. He worked for 1972 Presidential Candidate George McGovern. 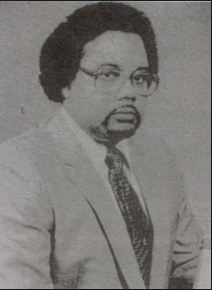 King was a top official for the Franklin Community Federal Credit Union in 1988. The Nebraska Foster Care Review Board made several claims of sexual exploitation of minors against him that year. They alleged King transported kids from Boys Town to his pedophile customers. Boys Town is organization and village outside of Omaha founded by Catholic priest, Father Edward J. Flanagan, to help “educate and treat” at-risk boys.

The FBI was already investigating financial malfeasance by the credit union. Franklin turned out to be a front company for King’s child prostitution ring. The story really came to life once the Washington Times published its story. It revealed King’s operation had arms that stretched as far as Washington D.C.

Craig Spence was a powerful Washington lobbyist, openly homosexual, and a confidant of King. Spence arranged the July 1988 party at the White House. He supplied underage boys for sex and cocaine. He also bought tape recorders so he could later blackmail the politicians involved, according to a June 30, 1989 Washington Times article. There were reportedly four of these parties from 1986-1989.

Congressman Frank is openly homosexual and still serving in Massachusetts. He told the Washington Times in June 1989 that he was “not surprised” by the number of prominent Republican names associated with Spence. Frank, however, became a major part of the story. He was the tool that deflected all attention towards him and away from the homo-pedophile Republicans. Frank admitted he fell in love with one of the callboys. He allowed the kid to turn tricks in his D.C. apartment while Frank was working on Capitol Hill. The callboy’s name was Stephen L. Gobie. He referred to Frank as “sweet and low” because Frank was a “sweet guy, but low on cash.”

To make a really long, demented, covered-up story short, Spence committed suicide in late 1989. He knew he’d ultimately be murdered by the Republican establishment since he held all the keys to the case. He was also dying from AIDS.

Lawrence King was sentenced to 15 years in federal prison. But he was convicted of embezzling $38 million, not for child trafficking. Three other associates of Vinson were also sentenced to prison. A few more stories about the child trafficking operation and White House pedophile parties were printed by the Washington Times after the original one. But no other news outlets picked up on it and the story ultimately died.

What is noticeably and obviously absent from this criminal case are all the johns and janes who paid for sex with children. At least one member of the George H.W. Bush White House resigned. But he was never prosecuted. And somehow Presidents Reagan and H.W. Bush never even had to answer to a Senate or House committee. It is also no secret that former Republican Senate Majority Leader Trent Lott resigned in November 2007 after reports surfaced regarding his homosexual prostitute candyboy.

These people will always protect their traditions, customs, and hegemony at any and all costs. When you control the media, the money, and military, you can manipulate anything to fit your agenda, including international child trafficking rings.

Republicans across the country celebrated what would have been Reagan’s 100th birthday yesterday. We thought it’d be more important to report on this barely disseminated story. Democrats are open homosexuals and pedophiles. Republicans are closet pedophiles and homosexuals. Period. End of story.

Republicans love anything and everything Ronald Reagan. They apparently love little boys’ butts and grown naked men just as much. Despite the truth about America’s 40th president, he’s still a legend and de-facto god to the GOP establishment.