UPDATED January 28, 2011: No surprise here. The two drive-by shooter cops got all charges dismissed and their only punishment is that they had to “resign.” This despite McKethan also being found guilty of insurance fraud. The thug damaged his Chevy Tahoe by throwing a cooler at it while arguing with his wife in 2007. He lied, said vandals did it, and got a $3,000 payout. His punishment for that – pay restitution.

Police thugs get away with everything. So arm yourselves and be ready anytime you encounter the thugs with tin-foil badges. 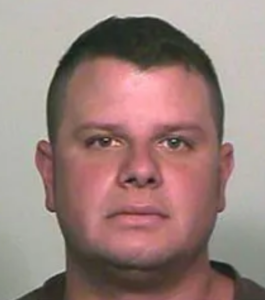 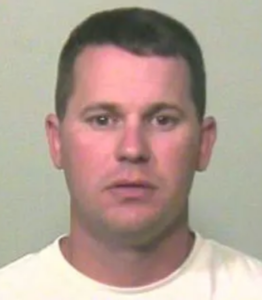 OKLAHOMA CITY — These two thugs would both be facing attempted murder charges and several arbitrary “street gang” crimes had they not been “police officers” on the night of June 16, 2009 at Night Trips Club at 220 S. Vermont Street. Instead Oklahoma City Police thugs Diron Carter and Michael McKethan are free on $25,000 bond each after being arraigned on August 26 for “using a vehicle to facilitate the intentional discharge of a firearm.” Both were given paid vacations (aka paid administrative leave) for the past two months, and will attend a preliminary hearing on October 22 in Oklahoma County District Court.

The two cops were off-duty and sitting in their SUV after the bar closed. They apparently got in an argument with other people in the parking lot. Carter made some snide remark, according to the affidavit of probable cause, before firing shots into the crowd. Carter first said the shooting was “accidental” before the facts caught up to him. However, in plain English, what happened is that two police thugs, thinking they are above the law, brandished and fired a gun at innocent people because they feel it is their right to do so.

Oklahoma County District Attorney David Prater, believing he is being tough on these two police thugs, vehemently declared, “if they want to act like a gang banger, we’ll treat them like a gang banger.” The problem with this statement is the fact I know of zero “gang bangers” (which is Prater’s code word for “blacks” and Latinos) who have fired a weapon in the direction of other people and not been charged with aggravated assault and/or attempted murder. In fact, it will be interesting to see what happens to Marston Lawrence Tolin, an Oklahoma man who was arrested in Georgia and is now awaiting extradition back to Oklahoma on the same “using a vehicle…blah blah” charge as the police thugs. The sentencing range is two years to life in prison. I predict the police thugs get a short probation term, while Tolin gets anywhere from 5-10 years.

These two OKC clowns barely scratch the surface as to the frequency of thug cop behavior like this throughout the USA. These people believe those fake-gold shield emblems worn on their shirts are their license to act like criminals who are subsequently protected by the U.S. and state Constitutions. These two police thugs will escape any serious punishment and obtain jobs at some other police department (probably in Texas, Arizona, or California) within a year or two.

The patrons at the club that night are lucky none of them were seriously injured or killed because of this thug cop recklessness. The citizens of the next city these thugs are employed with may not be so lucky.