Only in America can murderers get right back into the same job they had before killing someone without repercussions. Just ask Waldron’s fellow killer cop Dan Lovelace of the Pinal County (AZ) Sheriff’s Office. Le Sueur County Sheriff Dave Glisinski said “it’s great to have [Waldron] back. He’s a professional investigator and a key to the force.” Residents of Le Sueur County, with the sheriff praising murderers, should arm themselves immediately and be ready to defend yourselves from terrorists in badges at all time. The sheriff has given his blind approval of murder by his henchmen.

Here’s a report on thug Waldron’s return to work on Fox 12 in Mankato.

Nobody should be surprised here. The grand jury in Anoka County decided against pressing charges against Waldron after two hours of deliberation. According to the Minneapolis Star Tribune, “additional witnesses came forward…with accounts that differed from Heilman’s friend…” This means a few witnesses were paid by Le Sueur County to give testimony favoring Waldron. But again, nobody will ever know exactly what the grand jury heard because the transcripts are forever sealed. Murder, once again, goes unpunished in the United States.

UPDATED November 1, 2009: Grand Jury To Decide On Charges Against Waldron

The proceedings will take place in Anoka County starting on Wednesday, November 4. The venue was moved for obvious reasons. The problems with grand jury proceedings are numerous: they are not open to the public, the transcripts of said proceedings are forever sealed,  grand juries almost always side with police in these kind of cases, and a Le Sueur County prosecutor could have already filed charges on their own by now. The chances of thug deputy Waldron being charged with murder are remote. The best that can be hoped for are first degree manslaughter and reckless endangerment charges, again, because witness testimony carries very little weight in these type of proceedings. Everett (WA) police thug Troy Meade is only being arraigned on a manslaughter charge this week even though he clearly and wantonly murdered Mr. Niles Meservey on June 10. Operation Nation will follow the proceedings as best we can, but like everyone else, we will only know the end result.

Watch a report from WCCO-TV Channel 4 in Minneapolis: 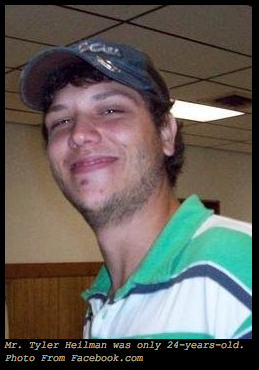 KASOTA, MINN. — Take notice American citizens: thug cops can now murder you if you are driving over the speed limit.

This is exactly what happened to Mr. Tyler Heilman; a 24-year-old who was murdered in cold-blood by Le Sueur County police thug Todd Waldron on July 20. Mr. Heilman was wearing only swimtrunks, thus the proverbial “he was reaching for a weapon” excuse cannot be used by Waldron. According to the thug cop, who was not in uniform when he committed the murder, Mr. Heilman was “swerving and speeding” down a street in Kasota, MN. Waldron, of course, said Mr. Heilman “resisted,” which, in thug cop world, gave Waldron the authority to fire four bullets at Mr. Heilman, killing him instantly.

Andy Skoogman, a spokesperson for the Minnesota Dept. of Public Safety, which is conducting the kangaroo investigation, says this case is “complicated” and tells people to “withhold passing judgment until all the facts come out.” I’m confused as to which part is complicated: that Mr. Heilman was unarmed and murdered by a thug cop, or that Mr. Heilman was wearing only swim trunks, was unarmed, and murdered by a thug cop? How about somebody kills this Waldron character and you tell your goons to withhold passing judgment as well.

Of course Waldron got his customary paid vacation – AKA thug cops’ best P.A.L. – Paid Administrative Leave – which all cops get when they murder or assault American citizens, and will likely remain on paid vacation for 8-10 weeks, pending the pre-determined investigation. We all know there will be no charges pressed against Waldron, so why is Minnesota DPS wasting time and tax dollars?

Mr. Heilman leaves behind a young son. Our thoughts and prayers are with the Heilman family, who are preparing civil action.

Friends of Mr. Heilman have set up a Facebook page to honor one of the latest victims of cop thuggery in the USA. RIP young man.

In keeping with cop damage control protocol after murdering yet another American citizen, cop-sucker Euro-American media news outlets in Minnesota are trying to justify Mr. Heilman being executed because he had a “prior criminal record” (expect the San Francisco Chronicle to join the fray sometime soon). However, I’ll give the Mankato Free Press credit, as they also pointed out thug Waldron’s prior criminal history, which includes a 1994 disorderly conduct conviction and a 1995 DUI which he wrecked a car and attempted to run from the arresting officers. So much for background checks and police being held to a higher standard.

Regardless, in order for an American citizen to be given the death penalty under color of state law, a jury must convict them of murder (the only crime eligible for a death sentence) and several appeals must be exhausted. Whether Mr. Heilman has a “prior criminal past” or not, the fact is he was unarmed and murdered by a thug cop, who will not face any sort of penalties. Using Euro-American media logic, Waldron can then be murdered because he has a prior criminal history. But this is the United States; Land of COP (Constitutionally Protected) Thugs.

Mehserle is now facing murder charges, despite Euro-American media efforts to paint Mr. Grant as an “ex-con.” If there was indeed a “scuffle” between thug Waldron and Mr. Heilman, hopefully someone out there was savvy and alert enough to roll their cell phone camera. Otherwise, sadly, thug cop justice will likely prevail (because witness testimony means nothing in these “investigations”) and Minnesota DPS will give the proverbial, “it was a tragic accident,” “Waldron feels terrible,” and “nobody wins from a situation like this” speel. If someone has video or even audio, please step forward immediately. But then again, Mr. Fong Lee was murdered on tape by Minneapolis thug cop Jason Andersen and of course, Andersen faced no murder charges. We’ll just have to wait and see.