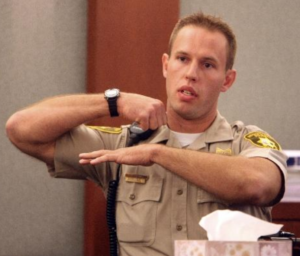 You can’t make this stuff up. Las Vegas Police fired serial killer Colling in 2011 NOT for the murder of Tanner Chamberlain, but because Colling was also caught on tape brutally attacking Mitchell Crooks who was filming Las Vegas police when they responded to a burglary.

Ramirez, 39, was killed by Colling during a traffic stop on November 4 in Laramie, Wyoming. Albany County Sheriff David O’Malley seems to be ok with the fact he hired this lifetime thug because Colling’s former feral pig buddies in Las Vegas “spoke highly of him.”

Is anyone surprised? I’m not sure which is more disgusting: How thug Colling shows absolutely no remorse for murdering a 15-year-old, bi-polar kid, or the state-run media news anchors for ABC 13 News in Las Vegas copsucking at the end of the following video.

I’m very sorry for your loss, Ms. Oquendo. May Tanner rest in peace. Murderers like Colling ultimately have to answer for their actions, one way or another. 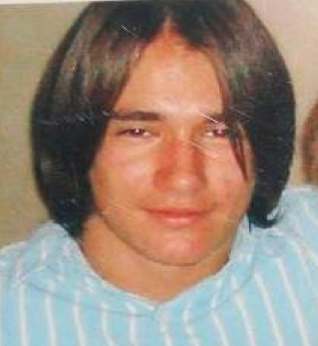 American parents need to take notice of the latest garbage police thugs can feed media and prosecutors to justify murdering 15-year-olds: he was “troubled” and bi-polar.

The murder occurred that Tuesday night after Tanner got in an argument with his mother when she told him he could not go out with a friend. Tanner’s mother, Ms. Evie Oquendo, said he had an episode related to his bi-polar disorder because he was upset he could not go out. Tanner pulled her hair and punched her before she convinced Tanner to take his anti-anxiety medication. Tanner had regularly refused to take the pills because drugs destroyed his creativity. He was involved in poetry and drama club at his school. Tanner fought off the episode, prompting he and his mother to take a walk to further calm him down. But neighbors had already called the badged gangsters, who showed up smelling blood.

Tanner, fearing for his life based on how police arbitrarily murder American citizens daily, grabbed his mother and held a knife towards her when the sound of police sirens increased in volume. Ms. Oquendo later said, “he was scared” and “he wasn’t going to hurt me.” The police thugs yelled “drop the knife!” Ms. Oquendo begged them not to shoot. The feral pig Colling, likely either wanting an inevitable paid vacation or yearning the experience of murdering a child, shot Tanner in the head, killing him instantly.

Ms. Kemmy McCoy told NBC Channel 3, “of course, I’m sure it will be justified…all of them are.” She is exactly right. Again, no matter how concrete and blatant the evidence, police thugs are constitutionally protected from being liable for their animal-like behavior. Captain Randy Montandon of the murdering Las Vegas organization, came to the defense of Colling, saying the murderer, “discharged his weapon one time…striking the individual…disabling him.” No, Mr. Chamberlain wasn’t disabled by the bullet; he was MURDERED. These Las Vegas police thugs didn’t even bother inserting the proverbial, “our officers feared for their lives” crap, knowing they would get away with the murder regardless of the story they told.

Was Mr. Chamberlain wrong for being a bratty kid and putting a knife close to his mother? Yes. Did he deserve to be murdered in cold-blood right in front of his mother? No. Police thugs all over the country murder and assault innocent Americans. As far as I’m concerned, killer cops all deserve to die because they kill people. Young Tanner never killed anyone and should still be here today.

All we can do is wait for the kangaroo investigations to be completed, listen to the Mickey Mouse justification police thugs and prosecutors present to justify the murders, rapes, assaults; get mad; and move on. NOTHING will happen to thug Derek Colling in this case, while Ms. Oquendo must live with the fact her ONLY son (I think) is now dead.

There are several tribute videos on Youtube for Tanner. He was obviously a well-liked kid.

Our thoughts are with Ms. Oquendo, Mr. Chamberlain’s family, and friends.