UPDATED 12/4/2009: Niece of Maurice Clemmons, Other Supporters, Want Memorial For Her Fallen Uncle

Miss Destiny Hinton tells KIRO TV in Seattle that her uncle Maurice should have a memorial erected where he was maliciously murdered by police thugs without a trial. Destiny’s father, Ricky Hinton, is Clemmons’ brother, and was abducted by Seattle cops and is being held in an internment camp.

The state-run media story was obviously written in a tone conveying that Ms. Hinton and her family are crazy insane negroes for caring about and memorializing their martyred relative. Of course this same media treats it as a day of national mourning in the rare instance some white boy in a cop costume is put to sleep.

Hyman shot Garner in the back of the head after he allegedly told him to halt. Garner fled over a fence at night in the backyard of a house he was suspected of burglarizing. The cop used deadly force despite being “reasonably sure” the suspect was unarmed. The U.S. District Court in Memphis (not surprisingly) held that a state statute justified the murder and the “officer’s” actions were constitutional. The Court of Appeals reversed, ruling the statute unconstitutional, and the U.S. Supreme Court affirmed the Appeals Court’s Decision.

Kelly then shot the “scruffy-looking black man,” killing him instantly. Police tentatively identified the dead man as Clemmons. In other words, Kelly had no idea who he was shooting and thus could not “reasonably believe” the man was armed or dangerous. The scruffy-looking black man was running away, and thus cannot be shot by police thugs, per U.S. Supreme Court precedent. Of course cop blood lust and white copsucking always supersede any and all laws.

There will be several more of these failures before Seattle area cops ever find the man who put four feral pigs to sleep. Cops surrounded a house on 32nd Street and Yesler in Seattle, around 9pm last night, believing Clemmons was in there. Ten hours later, police entered the home and did not found their “scruffy-looking black man” who has now been “upgraded” to a “suspect,” according to KIRO-TV in Seattle. Area cops are saying Clemmons has been “bleeding” since 8:30 a.m. Sunday from an alleged gunshot wound inflicted by one of the dead cops. Yet Clemmons is still alive. We’ll keep you up to date.

Watch the report from KONG-TV Everett from this morning.

Things are getting to the point of explosion in the Pacific Northwest.

Just three weeks ago, Christopher J. Monfort ambushed Seattle cop Timothy Brenton, killing him while he and his partner sat in their cop car. Early this morning, four Lakewood, WA cops were killed while eating donuts at the Forza Coffee House on Steele Street in the Spanaway/Parkland area, about 40 miles south of downtown Seattle. The identity of the man behind this latest ambush is still unknown, and state-run media are in full “tragedy mode” for the dead Lakewood cops.

The four cops – Mark Renninger, Ronald Owens, Tina Griswold, and Greg Richards – went down in a hale of bullets from one man. Euro-American media have been on the story since the retaliatory strike went down around 8:20 this morning. Pierce County (WA) Sheriff Paul Pastor, who’s office responded to the scene, told KING-5 News in Seattle that these events “harm the good [police] can do in the community.”

Maybe he was talking about the “good” Lakewood Police have SPECIFICALLY done recently. Lakewood cop Brian Wurts shot and killed Curtis Wetzel on May 6. Wetzel was 17 feet away from the cop, but because he was “wielding a pocket knife,” that gave the feral pig permission to murder him. And if not this good deed, he must be speaking of the one on September 25, 2008 when they shot a 30-year-old man in the face after he crashed his car into a fence, according to KIRO 7 News.

Euro-American media paid little attention to all of the above incidents, unlike the Presidential Election-type coverage these four Lakewood cops are getting. In fact, the Pierce County Sheriff’s Office is threatening to press charges against KING-5 news in Seattle for “hampering the investigation,” since the NBC-affiliate has been closely reporting on the story all day.

The latest is that “authorities” are offering a $100,000 reward for tips leading to the man who killed the four cops, a man described by Euro-American media as a “scruffy-looking black male in his 20s.” This essentially gives Seattle-area police an all-access, 48 hour pass to harass, beat, and arrest any black man they wish in the area. But I guess cops already have this privilege regardless.

The first “scruffy-looking black man” they have chosen to harass is Maurice Clemmons, a 37-year-old man whom, as Euro-American media are emphasizing, was “set-free” by former Arkansas Republican governor Mike Huckabee after he commuted Clemmons state sentence for a crime he committed as a minor. 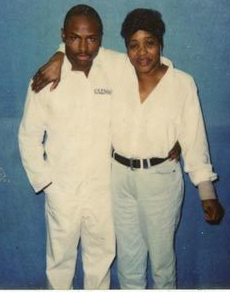 Euro-American media are referring to Clemmons as a “child rapist,” “ex-con,” and other buzzwords which easily riles up Euro-American copsuckers. Clemmons is being called a “person of interest” by the cops, and not a suspect. There will likely be several more “scruffy black men” harassed in the next 48 hours, as cops will go to great lengths when killings involve their cohorts.

We will be updating this story constantly.