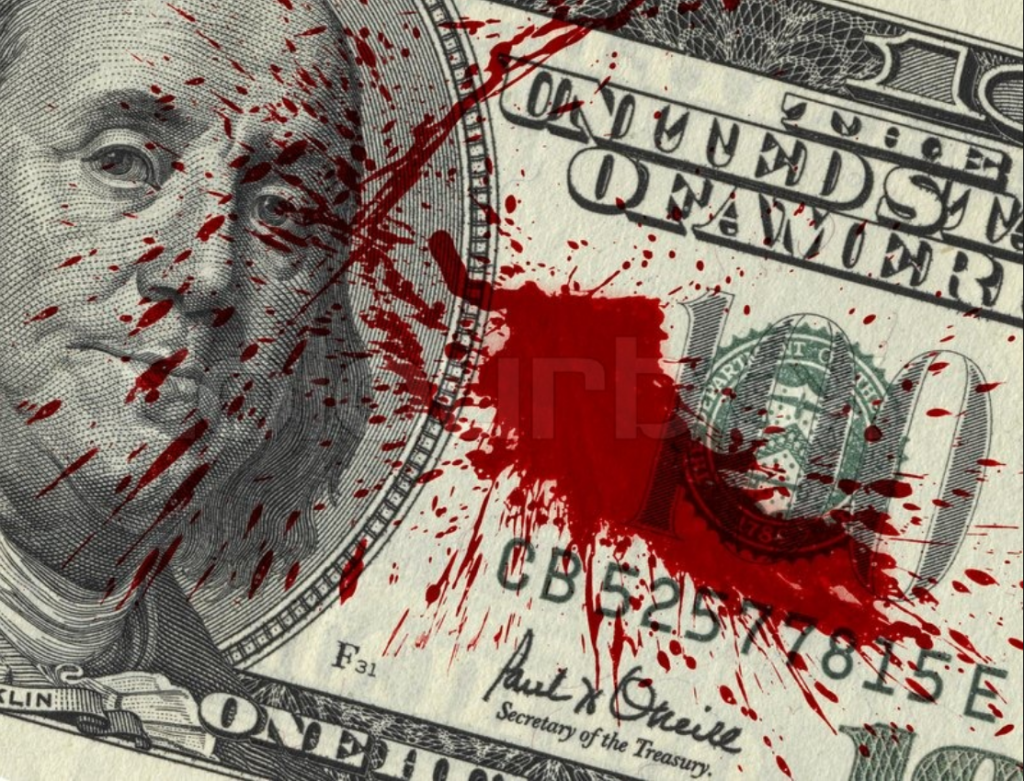 Police thugs feel comfortable murdering American citizens because the U.S. Constitution (Eleventh Amendment) protects them from most civil liability. And even if an attorney is savvy enough to get around the archaic, sadistic amendment, the average price U.S. municipalities pay for their cops to enjoy the apparent privilege to murder, rape, and/or assault Americans is around $600,000 per victim; a relatively cheap price for taking someone’s life and/or well-being. And none of it ever comes out of the pocket of the actual murderer or assailant; it’s all paid for by insurance.

We first look at the murder of Jose Baudillo Lemus-Rodriguez. Mr. Lemus-Rodriguez was murdered by Fort Wayne, Indiana police thug James Arnold on December 23, 2007. Arnold had been on the force for less than two months when he emptied an 18-round Glock clip into the victim’s car after a short chase.

Lemus-Rodriguez was unarmed, and of course, thug Arnold was not charged with any crimes. He returned to his cop job after a few months of paid vacation, aka “paid administrative leave.”

It is extremely difficult to believe anything Fort Wayne Police say about this case as they, to this day, refuse to release the dash-cam video of the incident. Very few people have ever seen the video. But one man who has – Larry Lee, a Fort Wayne businessman – said of the video via the Journal Gazette, “I hate to say this to the embarrassment of our city and the embarrassment of our police department, if this particular video is allowed to be shown, and if it is ever shown, it will warrant national attention. It is that bad. It is that unprovoked.” County prosecutor Karen Richard, of course, called the murder, “objectionably reasonable” conduct by the police thug.

Next, we take a look at the Fouad Kaady case. 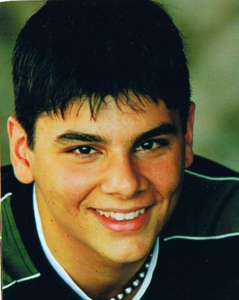 You can read all the different witness accounts and the B.S. accounts Sandy, Oregon police thug Bill Bergin and Clackamus County police thug David Willard used to justify their cold-blooded murder of Mr. Kaady on September 25, 2008. But here is the summary:

Mr. Kaady, formerly of Gresham, OR, was suffering from a chronic mental illness (likely bi-polar disorder) when he accidentally set his moving car on fire after lighting a cigarette while a full gas can was in his car. The flames caught onto Kaady’s body, causing him to panic and strip all his clothes off to protect himself from burning further. Mr. Kaady, according to his family, continued driving and struck several cars until he crashed into a wooded area. Police thugs Bergin and Willard arrived at the scene with their guns already drawn.

Kaady, delusional from being severely burned, naked, bleeding, and likely having a manic episode, did not respond when the cops told him to turn over on his stomach. They Tasered the burned, naked Kaady twice before firing seven bullets, killing him instantly. Willard said he shot Kaady because he was bleeding and “did not want to touch him” because Kaady “might have had AIDS.”

Obviously the City of Sandy and Clackamus County have something to hide. Even though Oregon arson investigators claimed they found no remnants of a burned or exploded gas can in the car and said the fire did not start from inside the car (believe that if you want), the City of Sandy settled their portion of a federal lawsuit filed by Mr. Kaady’s family for $1 million. Clackamus County is still litigating the case.

If police thugs do not kill you, they will permanently or otherwise disfigure and assault you for an even cheaper price. The case of Angela Garbarino was covered by our website, and is still one of the most disgusting, cowardly acts I’ve ever seen an alleged “man” commit.

Ms. Garbarino was arrested by cowardly-bitch Shreveport, Louisiana police thug Wiley Willis in November of 2007. The before and after pictures of Ms. Garbarino speak for themselves. 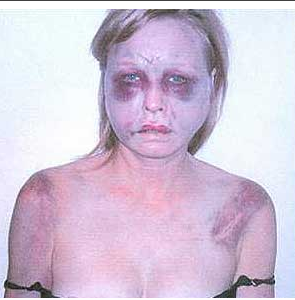 Note that Ms. Garbarino was handcuffed the whole time when the feral pig completely chimped out. The City of Shreveport settled the case for a mere $400,000.

-Mr. Curtis Good was murdered in his own apartment by Perth Amboy, NJ police thug Carmen Fazzolari when the cop shot him six times on August 20, 2004. Almost five years later, the city settled the federal lawsuit for $1.35 million.

-Ms. Kelly Medora, who weighed about 120 pounds, had her right-arm broken by 250-plus pound San Francisco police thug Christopher Damonte on January 23, 2005, after he twisted her arm so hard, it snapped right between her bicep and tricep. Thug Damonte was attempting to arrest Ms. Medora for “standing in the street.” San Francisco settled the federal lawsuit in January of 2008 for $235,000. 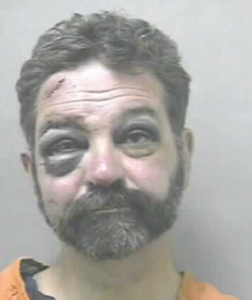 Roger Wolfe after the attack.

This past October, the State Police settled the federal lawsuit for $200,000.

The two prevailing themes here are that the victims and/or the victims’ families had to wait years for these “settlements” and that none of the police thugs were charged with any crimes. There is only one exception in U.S. history which come close to an American getting real justice after police thugs attack. 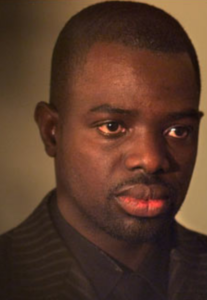 Mr. Louima got a relatively high settlement, and thug Volpe is now serving 30 years in prison. Of course the copsucking community believes Volpe should be pardoned and released. But the only reason the police thug is now in prison and Mr. Louima got such a large settlement is because the international attention the story got. The United States had to temper the now-obvious fact that it is a police state which protects thug cops, prosecutors, and judges from any sort of criminal or civil liability for their malicious, malevolent acts.

The question for Americans is this: would you rather wait three or four years for a POSSIBLE, relatively tiny settlement taht lawyers keep half of most of the time, or take matters into your own hands? Though the U.S. Supreme Court is now debating whether the Constitution should continue its absolute protection of prosecutors who intentionally and maliciously lie to convict someone. Yes, prosecutors can charge you with a crime, lie about and fabricate evidence, get caught, and cannot be held responsible criminally or in a civil lawsuit. This small potential “gesture” would still hold very few criminal government employees accountable if the SCOTUS rules for the people and not the government.

This Congress, in the alleged era of “change,” needs to add a 28th Amendment to the Constitution that repeals the Eleventh Amendment (which protects criminal judges, cops, and prosecutors), and include in said amendment federal mandatory minimum prison sentences for cops, judges, and prosecutors who abuse their positions and commit crimes under color of law (10 years without parole is a good starting point). This Amendment should also enact a new executive department consisting of federal agents and a diverse citizens review board, that handles every case of malfeasance, brutality, and murder by the aforementioned government actors.

We all know this will never happen in a police state. Its pretty rare for a federal civil rights case to even get to the point of trial or settlement, as judges are quick to dismiss them via the first demurrer filed by the defendant municipality. Cities will continue to pay the small “settlements” via their insurance companies to allow their thug cops to persist in all recreational activities, such as rape, murder, and assault of Americans. Further, Americans will seemingly continue to accept the blood money, which in most cases is gone within a few years anyway after taxes and lawyer fees.

American citizens need to realize one very disturbing reality: O.J. Simpson, a RICH “black” American citizen, was acquitted after murdering two other Americans: Ronald Goldman and Nicole Brown Simpson. Instead of a paltry $1 million civil settlement you and I would MAYBE get four-plus years after thug cops are acquitted or never even charged for murdering our family members, the Goldman’s and Nicole Brown Simpson’s families got a ridiculous $33.5 million civil judgment (which they never saw a penny of) about 15 months after Simpson was acquitted.

You may draw your own conclusion from there.

4 thoughts on “Average Price For Police Thugs To Murder Or Assault Americans: About $600,000”