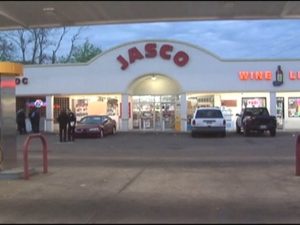 The execution happened Thursday, March 31 at a Jasco Food Mart on Martin Luther King Drive and Woodrow Wilson Avenue. Mr. Connell Lindsey entered the store and “threatened the clerk with a knife,” according to Jackson assistant police chief Lee Vance. Cops arrived and ordered Mr. Lindsey to “drop the knife.” But Mr. Lindsey “lunged at the store owner,” according to Vance. The police thug, whose name is being protected by his local government, fired several shots at Mr. Lindsey, killing him instantly. The killer cop was rewarded with a paid vacation, aka “paid administrative leave.”

Watch a report from WLBT Channel 3 in Jackson.

Witness accounts are completely different from the cops’ tale as to what happened. Mr. Charles Green, Lindsey’s brother-in-law, said store employee Surgit Singh followed Mr. Lindsey out of the store. Singh accused Lindsey of slashing the tires on his car. Singh claims Lindsey was intoxicated and threatened him with a knife. Mr. Green and Mr. Bruce Young, another witness, told the Clarion Ledger that Mr. Lindsey dropped the knife when the killer cop ordered him too. But cops lust blood and murdered him anyway.

Jackson City Councilman Kenneth Stokes said the only reason Lindsey pulled out a knife was because another unnamed store employee threatened him with a baseball bat. Several regular patrons of the store said the clerks frequently short-changed them and threatened them with bats and other weapons. Jackson residents protested in front of the store Saturday. They are planning another one this week to demand the store close or move out of the neighborhood. Vance said the murder of Mr. Lindsey was “justified” and “necessary.”

Cop “educations” consist of 16-week “police academies.” Thus any random thus is given the statutory power of street judge, jury, and executioner in a matter of a few months. State courts do not convict killer cops. Police thugs have incentive to kill, knowing they will be rewarded with paid vacations and accolades from the copsucking community.

The Eleventh Amendment gives police thugs a Constitutional hiding place. That’s why Mr. Lindsey was summarily executed. It’s also the primary reason these incidents happen everyday. Euro-American are only concerned about finding a “criminal record” for Mr. Lindsey. He is an American citizen who had several friends and family members who cared about him. One friend said Mr. Lindsey “would not hurt a mosquito.” We do not know if Mr. Lindsey has surviving children.

Our thoughts are with the Lindsey family.