UPDATED May 19, 2016: Huntington police thug Richard Kern, who murdered a man in 2009, being portrayed as some sort of hero on Facebook so copsuckers can worship him like a god.

UPDATED 8/20/2011: Edward Crawford found guilty of involuntary manslaughter, sentenced to six years in prison. Once again, this case shows that black people are not allowed to defend themselves in this country.

In the state of West Virginia, similar to Arizona, you may carry a firearm as long as it is not concealed and as long as you have the legal right too, as Mr. Edward Crawford did. He had also applied for a concealed weapons permit two weeks prior to the incident which he was forced to defend himself. According to his fiancee, Mr. Crawford was going to be a security guard. It appears that Mr. Crawford and the man who tried to attack him, Anthony Johnson, knew one another. This fact does not, however, excuse the fact that Johnson threatened the life of Mr. Crawford and his fiancee. 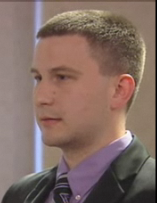 Recent happenings in Huntington, WV and all across the country, demonstrate, prima facie, that a badge is a license to shoot and kill whomever you choose for whatever reason you can conjure. Non-white Americans without badges, however, cannot defend themselves from assaults and/or attempts on their lives without legal consequences.

Huntington Police contend that Kern was on a doughnut break when he entered a convenience store just after midnight. A random person in the store approached the cop and told him that Mr. Wilson was “acting suspiciously” and that Wilson allegedly had a gun. This is where the story becomes a tale of two sides, which I’m always more apt to believe the witnesses than cops trying to protect their “right” to randomly shoot anyone they want.

A witness, according to a WSAZ Newschannel 3 report, stated that Wilson was running away when Kern shot him. Of course, the police (if that’s what we’re calling them) said that Kern “thought [Wilson] was going for a gun” and that he “fired in self-defense.” The police further tried justifying the attempted murder by saying Mr. Wilson has a prior felony record. Kern, after recklessly shooting Mr. Wilson “in the torso” (which is cop-speak for his back), was rewarded with a paid vacation (aka “paid administrative leave”) as all thug cops are after their murders, assaults, or rapes of American citizens.

There is surveillance video from the convenience store camera, which apparently caught most of the incident on tape. However police are refusing to release it. Anytime video clearly justifies a cop’s behavior, U.S. police departments always immediately release it to media outlets so cop-sucking Americans can praise them as “heroes.” The fact the Huntington Police have refused to release the video, and the fact the witness account totally contradicts what the police are saying, can only lead rational individuals to believe there is something being hidden.

Now to the story of Mr. Edward Crawford. The 22-year-old Huntington resident was sitting in his car on September 30, when a man named Anthony Johnson ran towards Mr. Crawford’s car, yelling several racist, threatening comments at him and his fiancee. Not knowing what Johnson might do to he and his lady, Mr. Crawford, who is black, fired one shot at Johnson, which proved to be fatal.

Mr. Crawford was put in a life and death situation which he had to act quickly in order to protect himself and his fiancee. For his heroic efforts, he is now being charged with first degree murder and sits in a county jail. It is clear Mr. Crawford did not want to hurt anyone that day, as he continues to apologize to the attacker’s family. This is a far cry from Kern’s paid vacation for shooting a man in the back who was running away and not posing a threat at all.

The obvious differences between Kern and Mr. Crawford are clear: Kern is a COP (constitutionally protected) thug, while Mr. Crawford is classified as “a black” in the United States. You must only peruse the pages of the OP-NAT Eye to see that police thugs are RARELY charged with any crimes for murdering, assaulting, and/or violating Constitutional rights of American citizens. Though a vast majority of these cops are of European descent, these people can be from all walks.  No matter how incriminating the evidence, the fact is that police have a de-facto “right” to murder, and must only say something like “my life was threatened” to be cleared of all criminal and civil liability. They will kill anybody, anytime, and enjoy their paid vacations as a result.

In contrast, black Americans will never be lawfully allowed to protect themselves against rabid Euro-Americans, or anyone else for that matter. Mr. Crawford is just one example of this. In my situation, I was attacked, on July 22, 2008, at knife-point in my own apartment, extorted for money, was spit on in my face, and choked by a rabid Euro-American. When I discharged my pistol in the air (because I definitely did not want to kill anybody, but also, like any other person, do not want to get killed) I was charged with aggravated assault with a deadly weapon and several other felonies. The assailant, Michael Arthur Wood, was also, similar to Mr. Crawford’s situation, yelling all kinds of racial slurs. But this and none of the other facts mattered to Tempe (AZ) police. It is a virtual felony in this country to say something derogatory about Europeans who call themselves “Jews” but is acceptable for both the aforementioned to say and do whatever they want to “blacks.”

Another incident involves Mr. Rodney Smith, Jr., who you may remember as the “South Mountain Shooter.” Mr. Smith was registering for classes at South Mountain Community College in Phoenix on July 24, 2008, when two thugs who had already brutally attacked him seven months prior, attacked him again. This time, however, Mr. Smith did not want to be seriously harmed again, and fired his pistol at the attackers. He hit one of the assailants, and accidentally grazed two bystanders, who were treated and released from the hospital within a couple of days. Smith was charged with three counts of aggravated assault and 12 counts of endangerment.

And the incidents in Bucks County, Pennsylvania further illustrate these points:

Mr. Smith, Mr. Crawford, and myself all had to defend ourselves from various attackers. But again, “blacks” are not allowed to do so in this country, while police and all Euro-Americans are afforded this right to self-defense. You need to look no further than the cases of Steve Saridakis of Tempe, AZ – who shot at a black man’s car while it was driving away – and Joe Horn of Pasadena, Texas – who murdered two black men who posed absolutely no threat to his life. Neither were charged with any crimes and neither were ever even arrested. Police in this country are rewarded with paid vacations for murdering American citizens, while Euro-American men are rewarded with notoriety and immunity from prosecution for murdering and/or shooting at black people. But did you really need to read this blog to know that?

While Kern and his wife (or boyfriend or whatever) are probably in Hawaii enjoying the paid vacation, Mr. Crawford now sits in jail facing serious charges. And though Kern fired at least five shots at Mr. Wilson, with a least three of them straying (and one hitting a parked car), he will not be charged with endangerment. Instead Mr. Wilson, the victim, is the one being charged with endangerment. Mr. Crawford feared for his life, just as Kern allegedly did. But again, this is the USA, and only certain people are allowed to defend themselves without consequences.

We can only hope that justice prevails in both cases: that Kern, once the video is released, is charged with endangerment and attempted murder, and the charges against Mr. Crawford are immediately dropped. But this is America, and we definitely know Kern will be back working as a cop within the next couple months. Operation-Nation will hold out hope and keep Mr. Crawford and his family in our thoughts, but the reality is grim. Our thoughts are also with Mr. Wilson and his family.