Expect Meade to kill at least one more American citizen in his cop career, and to also be found civilly liable for Mr. Meservey’s untimely death in the federal lawsuit his family filed. However, this will not bring Mr. Meservey back, and the killer will, AGAIN, walk free.

A small victory for the American people, especially the family of Mr. Niles Meservey, as Snohomish County prosecutors added a second-degree murder charge on Thursday. Meade will be the first cop to try and use the “car as a deadly weapon” defense, to justify shooting Mr. Meservey seven times in the back. The trial is scheduled to start April 13, but I assume Meade will have to be arraigned on the murder charge, and given new release conditions, thus pushing any potential trial to at least the end of the year.

Watch a report from King-5 News in Seattle.

This was a formality. The Thursday afternoon hearing featured a few “plain-clothes officers” who showed up to support the killer cop. Meade’s lawyer, David Allen, said he expects acquittal at trial. Based on history and the fact police thugs are never convicted of any crimes for murdering, raping, or assaulting American citizens, regardless of the evidence, why wouldn’t Allen feel confident? We’ll keep you up to date on the trial. 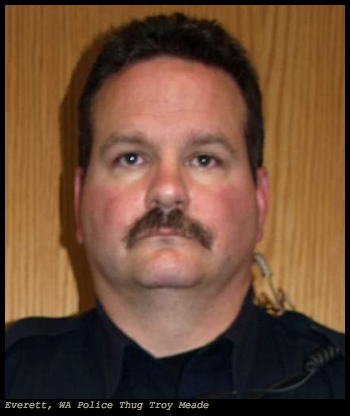 The more you read about this case, the more obvious it becomes that Troy Meade should be locked up for life without the possibility of parole. The Washington State Patrol’s Criminal Investigation (see PDF here) reveals that Meade is a criminal thug who was looking to use his murder toys against anyone he could. According to the report, Meade was belittling and insulting Mr. Meservey, saying things like, “I don’t know why the fuck I’m trying to save your dumb ass.” Another officer at the scene admitted that none of their lives, nor any civilians lives, were in jeopardy. And for some reason, prosecutors are recommending Meade remaining free on his own recognizance, without even having to post a bond (see PDF of the charging information docket here).

Meanwhile the Snohomish County prosecutors office has released photos from the crime scene, including pictures of several bullet holes in Mr. Meservey’s driver seat in his car; and a photo which proves that Mr. Meservey’s car was not a “deadly weapon,” as Meade will contend, because his car was boxed in by patrol cars and a fence. 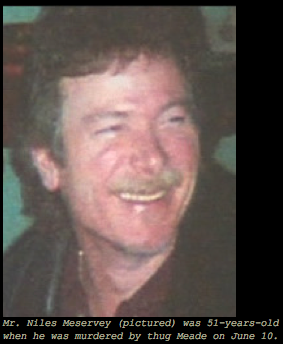 Though Everett, Washington police thug Troy Meade should be facing first-degree murder charges and life imprisonment, American citizens will have to settle for potential cop justice in this one.

Mr. Niles Meservey was trying to leave a bar on June 10 after a night of drinking. Several patrons at the bar were worried about his safety, thus called 911 when Mr. Meservey refused to give up his car keys.

When police, including Meade, arrived at the scene, they boxed in Mr. Meservey’s Corvette with their police cars to keep him from driving off. Mr. Meservey refused to get out of the car when the cops told him too. Meade than Tasered Mr. Meservey while he was sitting behind the wheel, which caused his legs to push the accelerator and his car to collide with a fence.

The information filed in Snohomish County Superor Court, charging Meade with manslaughter, said Meade’s exact words before subsequently shooting Mr. Meservey seven times in the back were, “time to end this; enough is enough.” Mr. Meservey survived only long enough to complete a prayer with a bystander, before dying. Meade was rewarded by the Everett Police Department with a paid vacation (aka “paid administrative leave”) for the murder.

Tanda Louden, the daughter of Mr. Meservey, has filed a $15 million wrongful death claim with the City of Everett, according to a Reuters report. It will turn into a federal lawsuit if the city does not settle the claim within 60 days. However, no amount of money will bring back Ms. Louden father. The inevitable slap-on-the-wrist, few-months-long jail term for Meade (which we predict is the absolute maximum punishment he’ll receive; with complete acquittal also highly likely) will not even begin to bring closure to this family tragedy.

Operation-Nation will continue following the progress of Meade’s criminal case and the civil case against the city. Our thoughts are with Mr. Meservey’s family.