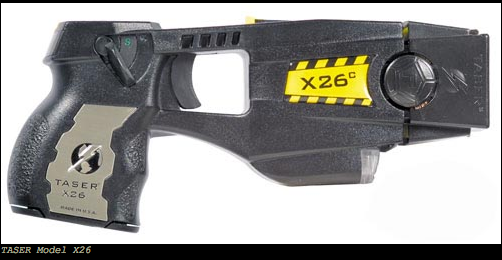 Pay attention police thugs: an American who is distraught after you pull them over for a seatbelt violation cannot be subject to TASERs. Though a “reasonable” cop should know this is common sense, the Ninth Circuit Court of Appeals affirmed a U.S. District Court judge’s decision Monday, making TASERs “excessive force” under the Fourth Amendment in certain situations.

This case began back in the summer of 2005 when Mr. Carl Bryan, who was 21-years-old at the time, was pulled over by police twice in a matter of a few hours. The first time, he got a speeding ticket, and was very upset about it…to the point of crying and removing his shirt to wipe away tears. The second time he was pulled over, less an hour later by Coronado (CA) Police thug Brian McPherson would lead to a senseless attack on an American citizen by a thug cop.

McPherson ordered Mr. Bryan to pull over because the young man was not wearing his seatbelt. Mr. Bryan complied with both order, but got even more upset and started verbally berating himself and slapping his own thighs. Though Mr. Bryan did not threaten McPherson or have any sort of weapon, McPherson contends that Mr. Bryan “took one step towards him,” which he deemed a “threat” to his life. McPherson shot his Taser at Mr. Bryan, who was standing over twenty feet away from the cop. The summary electrocution caused Mr. Bryan to fall face first into the concrete, breaking four teeth and causing several bruises to his face.

Mr. Bryan sued the City of Coronado and McPherson in the U.S. District Court of Southern California, under Title 42 Sec. 1983 of U.S. code, claiming assault and battery, intentional infliction of emotional distress, and failure to train. The district judge ruled that McPherson may not hide behind Eleventh Amendment immunity, which is always the first defense card rogue cops use. McPherson appealed to the Ninth Circuit, but it affirmed the lower court’s decision.

The best part of the Ninth Circuit’s decision was a quote from the case of Deorle v. Rutherford, 272 F.3d 1272, 1279 (9th Cir. 2001), which the court said, “A simple statement by an officer that he fears for his safety or the safety of others is not enough; there must be objective factors to justify such a concern.” The court also ruled that, “although Bryan had shouted expletives to himself while pulling his car over and had taken to shouting gibberish, and more expletives, outside his car, at no point did he level a physical or verbal threat against Officer McPherson.”

Though I expect thug McPherson to seek certiorari from the U.S. Supreme Court – which will further delay his inevitable justice – this case should go a long way in taking these murder toys out of the hands of police thugs. TASER International has already had to admit that shooting the electrocution toys at someone chest can kill them.

There were 334 Taser-related deaths in the USA between 2001-2008 according to Amnesrty International. Electronic Village has recorded 59 more deaths by taser in 2009, federal courts continue to call these electrocution toys for police thugs “non-lethal force.”

Regardless, this decision is good news for Mr. Prospero Lassi, a Chicago native, and the countless other Americans who are victims of police thugs and their electrocution toys. Mr. Lassi filed suit in the U.S. District Court in Chicago last week. The 40-year-old was tasered 11 times by LaGrange Park (IL) police thug Darren Pedota, while he was having a diabetic seizure on April 9, 2009. Granted, the Ninth Circuit does not have jurisdiction over the district court in Illinois, the different circuits commonly use their counterparts’ decisions to shape their own.

As a society, we are either inching closer to getting rid of these barbaric torture toys, or continuing with the police state policies that now are the norm in this country. If the U.S. Constitution works like its supposed to, Mr. Bryan will get his settlement; and of course police thug McPherson will continue to collect paychecks from that police department.