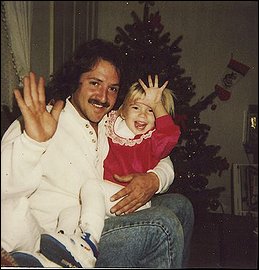 Mr. David Masters and his daughter.

It only took them six years to do so; and it’s worse than originally expected. The gunshots start at the 2:45 mark in the video. You can hear other cops saying, “WHOA, WHOA, what the fuck are doing dude? Come on!” In other words, one blood-thirsty, trigger-happy thug murdered Masters and the other cops present knew it. Watch for yourself.

It was Friday, November 13, 2009 when former U.S. Army green beret, Mr. David A. Masters, was gunned down in cold blood by Fairfax County police thugs, after allegedly stealing flowers from a landscaping business.

It’s been six weeks since the incident occurred, and all we know is that Mr. Masters was unarmed when the police thugs murdered him, and had bi-polar disorder. The name of the killer is still being protected by Fairfax County and absolutely no explanation has been given as to why this man is now dead.

One witness told the Washington Post, under conditions of anonymity, that Mr. Masters never exited his Chevy Blazer when cops surrounded his car. The cops were all to the side of the car and behind it, thus were in no danger of being run over (which will likely be their excuse in the inevitable “justified” ruling in this case). We won’t be rehashing the B.S. tale Fairfax County has been telling media. But the bottom line is that Mr. Masters was shot several times through his back car window, killing him instantly. Stealing flowers (if Masters in fact did so) is not a crime punishable by death.

This case is eerily similar to another incident involving Fairfax County thug cops. Fairfax County police thug Deval V. Bullock murdered alleged bookie Salvatore Culosi after cops used a SWAT team to arrest him on January 24, 2006. The department has continued to withhold any and all explanations from the family and public. What makes this story even more disturbing is the fact Fairfax County cop Dave Baucom lost more than $5000 of taxpayer money to Mr. Culosi in the previous year. Bullock said he shot Mr. Culosi “accidentally” after a car door bumped his arm. The Culosi family has since filed a federal lawsuit against Fairfax County and the individual cops, which is now pending in the Fourth U.S. Circuit Court of Appeals.

The moral of these two stories is that Fairfax County cops will kill you, cover it up, and offer no public explanation. They obviously feel they have the right and privilege to murder Fairfax County residents. Mr. Masters was murdered for allegedly stealing flowers and Mr. Culosi for taking the money of degenerate gambling cops. Of course, one of the police thugs were charged with any crimes.

The families of Mr. Masters and Mr. Culosi will never see, hug, or kiss their now deceased loved one again. There are other means to obtain justice since this system refuses to do so. Fairfax Police got away with murdering your family. No amount of money will bring them back and nobody was charged for the murders. Street thug cops require street thug justice. You decide.