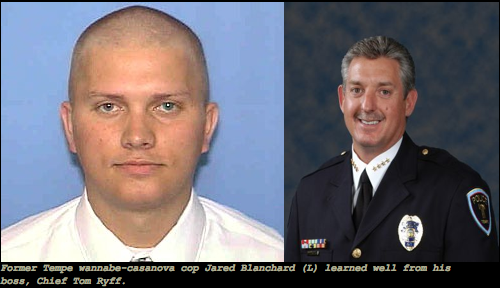 The story of Blanchard has been talked about on local news outlets and publications for the past couple days. Blanchard resigned from the Tempe Police Department this week after admitting to “using his position” to have sex with women. There were several instances that he got women’s phone numbers off of speeding tickets and called them. The funniest incident was when a suspect Blanchard was supposed to be arresting got away because he was too busy spitting weak-ass cop game to a woman during the arrest.

This report from KTVK Channel 3 in Phoenix describes the incident.

Sergeant Steve Carbajal, the Tempe Police media relations guy, said “there’s a lot of trust that goes with the badge. We can’t have people abusing that trust.” He continued, “we don’t want our officers to use their position as a dating service.” Apparently these rules do not apply to the chief.

Tempe Police Chief Ryff was caught on tape not only encouraging his subordinate officers to lie on their police reports, but also  arranging liaisons with strippers (listen to the tapes here). Ryff admitted to CBS 5 that the tapes published by Operation-Nation were in fact his voice, after initially denying it. Ryff also had an affair with Charlene Berge Blum, of Berge Ford auto dealership fame.

Sexual exploits are no big deal for cops. Blanchard will easily land another police job in the near future. Meanwhile Ryff continues to collect paychecks without repercussions for his adulterous, juvenile behavior. Blanchard should have forced the City of Tempe to fire him, and force them to provide a reason. It’s likely the city forced him to resign. Blanchard’s deeds are about as “trustworthy” (says Carbajal) as the chief’s. But the low-level cop is out of the job, while Carbajal is likely due another raise.

Ryff is a cancer to the City of Tempe. He’s a petuant horndog who is incapable of performing such an important job in a city with a major research university and diverse population. Ryff should be fired immediately and investigated by the U.S. Justice Department. It is common knowledge that he has used taxpayer dollars to pay for strippers. How many more of these copycat incidents have to happen before Ryff is held accountable? They don’t call him “Teflon Tom” for nothing. That’s pretty “CULO,” huh Tom.

One thought on “Chip Off The Ol’ Chief: Tempe Cop Jared Blanchard Resigns Over Sex Scandals”