It was around 2 a.m. that Saturday morning, June 12, 2010, when Mrs. Lurinda Hatathli called Mesa Police after she and her husband, Mr. Jermaine Walmsley got in an argument and she wanted him to leave. When police arrived, Mr. Walmsley, 36, was outside the couple’s apartment building on Mesa Drive, just north of Main Street, sitting on a curb with two of the couple’s children.

The three cops who were on the scene (Pascarella, along with “officers”  E. Fire and J. Gardner), unprovoked, attacked Mr. Walmsley. All of them starting throwing closed-fist punches at the victim, as his children and wife watched. They assaulted him until he fell to the ground unconscious. One of the cops then jumped on the unconscious victim’s back, grabbed his head, and slammed his face into the concrete sidewalk at least three times, according to witnesses. There are still pieces of Mr. Walmsley’s face in the sidewalk to this day.

Of course, in keeping with standard U.S. police state protocol, the cops tell an entirely different story. According to Mesa Police, “Officer” T. Pascarella (badge # 16789) pulled out his “X26 Taser” because Mr. Walmsley would not cooperate with an “order to sit down.” (see PDF of the police report here). Pascarella continued, saying he re-holstered his Taser and “decided to go hands-on with Jermaine.” Pascarella continued with this narrative, saying his intention was to do a “side cast takedown,” which is cop-speak for “justified” assault and battery. The police thug admitted to “delivering three closed fist strikes” to Mr. Walmsley’s face. “Officer” J. Jones, badge # 16927, who witnesses confirmed was not even at the scene during the attack, also said he “delivered three punches to Walmsley’s face as a softening technique.”

When it was all said and done, Mr. Walmsley was left unconscious for several hours. He woke up with a “closed head injury” and a “zygoma fracture,” according to records we’ve obtained. Zygoma are those parts of the human skull that form the orbital bones around your eyes. Here is a scientific look at what it is (in green). 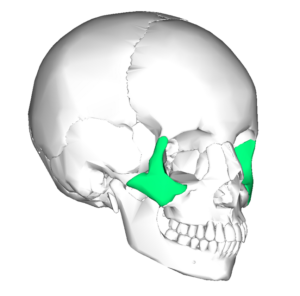 The pictures of Mr. Walmsley after the brutal assault he endured at the hands of these gangsters posing as “officers” might tell the story better. 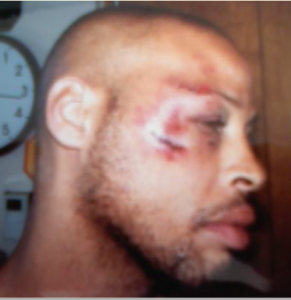 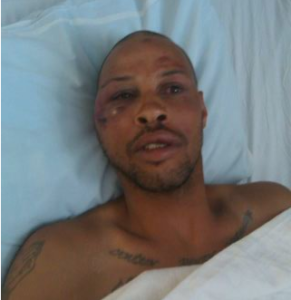 Mr. Walmsley, of course, was charged with resisting arrest, “criminal damaging,” and several other arbitrary felony “crimes.” And what’s really creepy about this latest police state incident in Arizona is that the worst is yet to be told regarding the victim.

Maricopa County justice soon took over for Mr. Walmsley, as he would spend the next 28 days in jail with a broken face needing plastic surgery and other “adjustments” immediately. He was left to rely on Sheriff Joe Arpaio, who is being criminally and otherwise investigated by the Justice Department and FBI.

Mr. Walmsley was denied medical treatment for his broken face and denied any sort of pain medication besides aspirin for the entire 28 days. Mr. Walmsley will have to endure even more pain to fix his face now as a result of Maricopa County’s deliberate indifference to his obvious injuries. The victim was told that he would have to have his face “re-broken” and re-assembled as a result of Maricopa County’s gross negligence. The bones started to heal the wrong way within days because Mr. Walmsley was in need of immediate plastic surgery after the attack by Mesa Police.

But lets forget for a moment about this first nightmare Mr. Walmsley has to worry about. The reasons he didn’t get the treatment he needed was because of Mesa Police and Maricopa County justice. Mr. Walmsley and his wife, Lurinda, were told by “Officer [Jhonti] Jones,” via telephone voice message, that Mr. Walmsley would not be arrested because of his severe injuries. But don’t take my word for it…listen to the voicemail yourself. CLICK HERE for the MP3.

You heard it correctly. Jones said Mr. Walmsley would be “long-formed” and not put in jail because of the obviously serious nature of his facial trauma. It appeared that Jones wanted to be human at first, but was overruled, and subsequently instructed by all the other cops at the scene. It appears that Mesa Police forced Jones, who is “black,” to say he was part of the gang beating, so the true fact that three “white” cops brutally assaulted Mr. Walmsley, is not discovered. Witnesses, again, did not see Jones at the scene until the aftermath.

We’ll make a long, disgusting story short, as far as the “justice” that took place. Mr. Walmsley was arrested by Mesa Police while being treated at Osborn Hospital, in the Old Town area of Scottsdale. Not only did Mesa Police arrest Mr. Walmsley outside of their jurisdiction, but then seized his cell phone, which Mr. Walmsley had recorded audio of the entire incident via the camera on his phone. He was taken to jail in downtown Phoenix and offered a “plea bargain” of 1.5 years in prison by Maricopa County prosecutors before a judge ever said a word to him. As of today, Mesa Police are still claiming they do not and never have had Mr. Walmsley’s phone.

The next four weeks would see Mesa Police’s story completely unravel. An ambitious Maricopa County public defender, Chellie Wallace, took advantage of the fact that “Officer” Jhonte Jones was the only cop to show up to the preliminary hearing on Tuesday, July 6. He did a very poor job on the stand. We’re told Jones stuttered through questioning and contradicted himself to the point that Maricopa County Judge Jerry Bernstein dismissed the case for lack of evidence on all charges (see PDF here). And though Mr. Walmsley was ordered released immediately, he did not get out of jail until four days later, Saturday, July 10.

Mr. Walmsley and Mrs. Lurinda Hatathli have said they may file claim notices not only against the City of Mesa, but also Maricopa County and Sheriff Joe Arpaio, for obvious Fourth and Fourteenth Amendment substantive due process violations. We informed wife and husband that they have six months to file state claim notices and two years to file federal claims.

Of course, our call to the Mesa Police Department was transferred several times before we gave up and did not get any sort of comment on this story. A message left with “Officer Jones” was also never returned.

——————————————————————————————
Phoenix Copwatch is a citizen’s group formed in 1998 to combat abuse by the police in our community. We use a variety of means to fight police abuse, including community patrols, videotaping of police activity, and education. Copwatch is completely independent from the police, all other law enforcement agencies, the government, and all political parties. Although Copwatch groups exist in many other cities around the world, they all operate independently, and there is no national or international body that oversees our organization. All of our members are unpaid volunteers who freely dedicate their time to ending police abuse.