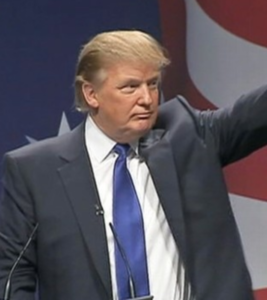 Donald Trump has become the first candidate for President in the history of the United States to win a nomination without ever going through a primary.

The White House, in response to the birther conspiracies by Republicans and their offspring parties, released another birth certificate of President Barack Obama yesterday. Trump told a crowd of reporters that he was “proud of himself” because he was THE whiteboy who made the black President “show his papers.”

Trump said he would need to verify that the President’s papers were “real.” He said the President will also need to produce his college transcripts for observation.

Republicans and their white followers are rejoicing at the fact their candidate was able to enforce old U.S. laws which forced black people to “show their papers” indicating they were free or had permission to leave the slave quarters. Goldie Taylor, an editor for The Grio, explains these “show me your papers” laws, which are similar to immigration laws today.

White Americans across the country celebrated yesterday with tea parties, complete with crumpets, guns, and a live Fox News broadcast of the movie “The Birth Of A Nation.”

“This is really a big day for the white race,” Mississippi governor Haley Barbour said. “Donald is such a charismatic, intelligent man, and he has my full support as we make sure that boy doesn’t serve another term in our House.”

Republicans believe the “we hate niggers and spicks” strategy, which worked brilliantly during the midterm elections when the GOP took control of the House, should make 2012 an easy victory for their party. Trump said he may find an “obedient, patriotic black boy” to run as his vice president, but also hinted at Arizona Republican Senator Russell Pearce and Orange County, California Republican Marilyn Davenport.