We concluded from a few cases the average “settlement” Americans get when they are murdered or assaulted by police thugs is right around $600,000. But as novice statisticians know, the average (mean) is rarely a good indicator because of outliers in the data. When I found out about the $125,000 “settlement” the family of Mr. Bernard Monroe received from the town of Homer, Louisiana, it appears now that police thugs are getting huge bargain prices to continue their recreational blood lust when it comes to murdering black people.

This means the family of Baron “Scooter” Pikes is likely get a similar $125,000 insult, if they are pursuing anything at all. It also means cops can kill you and their employers’ insurance companies also get a bargain. Inbred whiteboy police thugs love murdering black people. Police uniforms are the 2011 version of the sheets. Hell, if we could go kill any inbred whiteboy cop we deemed necessary to take out, and only have to pay $125,000 each and not face any criminal charges, I’m sure we could pool together the funds from various organizations, people,  and countries.

What brothers and sisters need to realize (QUICKLY) is that we are still the chattel of Euro-American males. Praying to white Jesus and waiting for President Obama to do something is simply foolish. Mr. Monroe’s life was not lost in vain. He was a casualty in this war we collectively act like is not happening. It is not safe to encounter these police thugs, as your life will be in eminent danger. Be proactive, not reactive.

RIP Mr. Monroe. We will use the energy of your soul to fuel Nubian Nationalism and our ultimate freedom and prosperity.

This can hardly be called breaking news since we all knew this would be the outcome (see below). Twelve witnesses told a grand jury that Mr. Monroe was unarmed. But this again does not matter in a police state like the USA, particularly in Confederate states.

The Second Amendment was originally enacted because American citizens felt an essential need to protect themselves against British thug cops back in the late 1700s. The British thug cops wore red; these cops today wear blue. ARM YOURSELVES NOW! 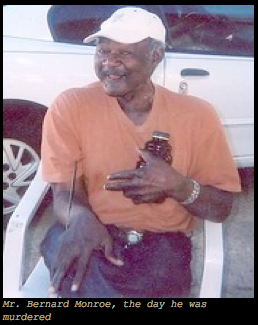 Mr. Monroe was a throat cancer survivor and thus could not speak. He had several family members and friends over for a barbecue on February 20. The Homer Police Department, including the killer, Tim Cox, showed up at Monroe’s cookout to harass his son, Shawn. Euro-American media have focused on a “criminal record” of Shawn Monroe; but he was not wanted for any crimes.

Terrorist Tim Cox gunned down Mr. Monroe in cold blood in front of his grandchildren and great grandchildren. Cox then placed a gun Mr. Monroe owned near his corpse to try and cover the murder. Several people witnessed the cover-up. A kangaroo “investigation” is ongoing by Louisiana State Police. They have already concluded that Mr. Monroe was “holding a loading gun” when he was murdered, contrary to several witness accounts. Cox had been a Homer Police thug for only two weeks before he murdered Mr. Monroe. He was formerly employed by the Haynesville (Louisiana) Police Department, and left “on good terms.” Those terms weren’t that good, however, since the department refused to re-hire Cox when he re-applied after he left.

Operation-Nation predicts no charges will be filed against the terrorists, and the feral pigs will, as always, get away with murdering yet ANOTHER Nubian American man.

For those of you (white people) who are skeptical and siding with the terrorist cops, here is what thug Homer Police Chief Russell Mills said in response to anecdotes about his thugs harassing, terrorizing, and assaulting black people in the Homer community: 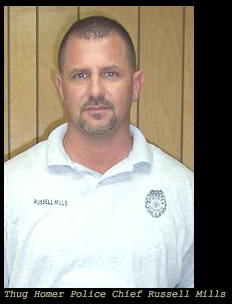 “This is how it should be. If I see three or four black men walking down the street, I have to stop them and check their names. I want them to be afraid every time they see police, they might get arrested.”

Mr. Monroe has the right to have a gun. His family members said he kept it for protection. Criminal police gangs have ravaged our country and there is an accepting attitude towards them by Congress, the Justice Department, and the copsucking community.

Mr. Monroe had a gun but did not use it to save his life, as he should have. If an American citizen kills one of these extremists like Cox or Mills in self-defense, they are made to suffer in prisons or are just summarly executed on the spot by other cops. Meanwhile cops are rewarded with paid vacations, aka “paid administrative leave,” when they murder Americans for fun. Mills would not comment on Terrorist Cox’s job status when asked a couple weeks ago.

The fact that Mr. Monroe, a 73-year-old American, was murdered by terrorist cops who tried to cover their actions is bad enough. Now Cynthia Love, one of Monroe’s neighbors who witnessed the murder, died of an apparent heart attack on March 6. Her death may have been the result of traumatic stress from witnessing the murder. The ever-worthless and embarrassing NAACP has made several photo-op appearances in Homer, screaming their proverbial “this is an outrage” rhetoric, while doing nothing to actually fix the situation.

Our thoughts and prayers are with Mr. Monroe’s family. They lost their dad, grandpa, and great grandpa in a terrorist execution on U.S. soil. I’d NEVER join the U.S. military because the only war in U.S. history that was worth fighting was the Civil War.

George Bush’s “war on terror” was/is real, except that its right here in our own backyard and not thousands of miles away in Iraq. The terrorists are cops, not Muslims. Once our military declares war on these radicals in our country, sign me up immediately for the U.S. Marines. Until then, arm yourselves and don’t be the next victim of these police state murders in our country.