That means it settled out of court. Read PDF here.

There was absolutely zero media coverage of Dossett’s “resignation.” 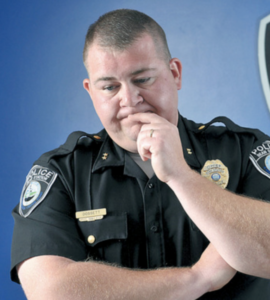 BEAN STATION, TN — Ms. Karen Elaine Carpenter is now permanently disabled, was forced to get both of her eyes surgically removed, and has permanent injuries to her face, jaw, liver, and shoulder, according to a lawsuit filed on July 20 in Tennessee’s Eastern Division of the United States District Court.

The story made headlines in the small town of 3,000 residents back on January 24. According to the police, Ms. Carpenter led them on a 15-minute chase which ended in her truck crashing into a ditch. Police said Ms. Carpenter, who was allegedly a “suspect with an outstanding warrant,” tried to drive out of the ditch, which prompted police thugs Andy Dossett and Ben Dossett to fire several shots at Ms. Carpenter while she was incapacitated in her wrecked truck. She was taken to the University of Tennessee hospital, where she remained for several weeks.

According to the complaint, Ms. Carpenter fled because she did not want to be arrested for a crime she did not commit. She also was friendly with several Bean Station police officers, as she begged the police thugs by using their first names: “Andy it’s me, please don’t shoot,” the lawsuit says. Despite the pleas, thugs Dossett and Dossett sprayed Ms. Carpenter with an unspecified number of bullets. She was ultimately shot in her arm, torso, and head; the latter caused her to lose consciousness.