A person commits a class 2 misdemeanor if such person knowingly and unlawfully…carries a firearm concealed on or about his or her person. Colorado Revised Statutes (C.R.S.) 18-12-105(1)(b). A person commits a class 6 felony if such person knowingly and unlawfully and without legal authority carries, brings, or has in such person’s possession a deadly weapon [i.e. a gun] in or on the real estate…of any public or private…school or any public or private college, university, or seminary…C.R.S. 18-12-105.5(1). Colorado is an open carry state.

Though the story police are trying to pass off as truth is an insult to our intelligence, we are obligated to tell their side of the story too.

The murder happened Thursday evening in the city of Aurora, Colorado. According to police, they were “conducting surveillance” near the 1400 block of Macon Street. Mr. Richard Arreola, was being investigated for “distributing methamphetamine to junior high kids.” Police say an undercover cop had brought marijuana from Mr. Arreola earlier in the day, but not meth. Mr. Arreola approached them “with a purpose” while carrying a rifle and a handgun. This prompted one police thug, who was not in uniform, to fire several shots, killing Mr. Arreola instantly in front of his mother’s house.

Watch a report from NBC 9 News in Denver.

Now let’s get to the obvious flaws in the tale police thugs are trying to pass as fact. First of all, they say Mr. Arreola approached them with a purpose. This story was either conjured by someone who is mentally disabled or state-run media and police are simply relying on Americans’ collective stupidity to believe this. All you must do is look at one of the crime scene photo released by police. 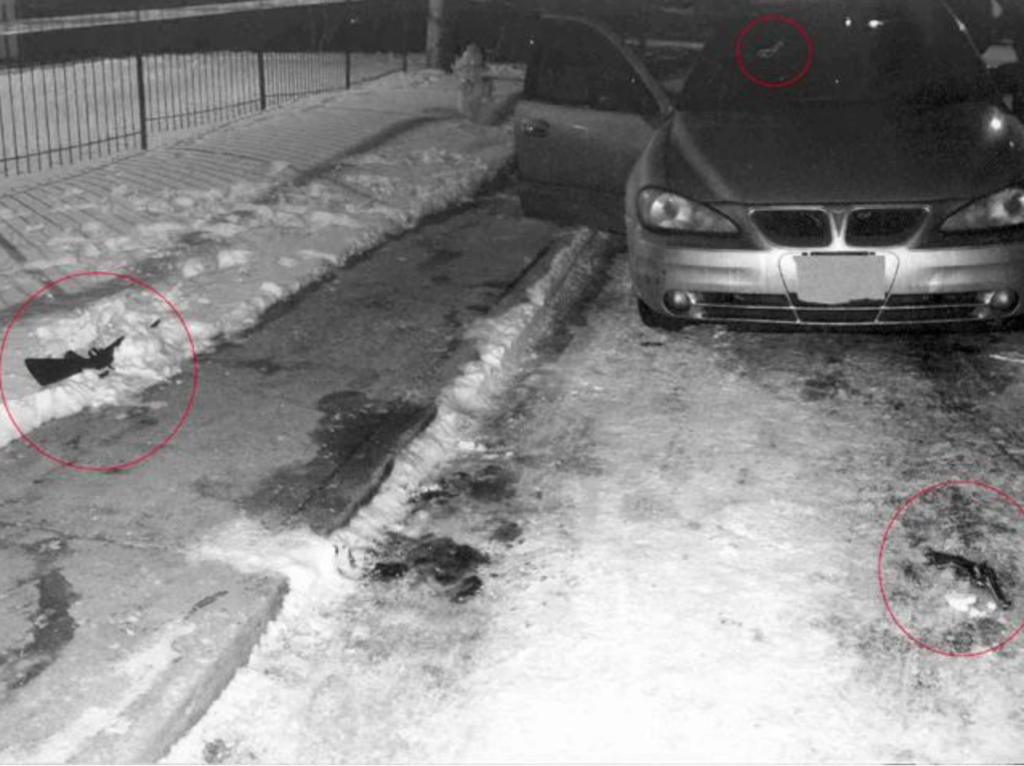 So if Mr. Arreola approached these cops, why are all the bullet holes in his car windshield? Another photo showed a handgun on the ground outside the passenger side door. People with common sense can easily determine that Mr. Arreola was sitting in this car, while LEGALLY possessing and carrying his firearms, and was gunned down in cold blood by a police thug itching for a paid vacation (a.k.a. “paid administrative leave”). Then his guns were removed from his car and thrown out into the snow to help the copsucking community parrot this BS story.

Police then say that they executed a search on Mr. Arreola’s business and found marijuana. So these cops allegedly bought weed from Mr. Arreola earlier in the day, than found marijuana at his place of business, but police maintain he is some sort of meth pusher to children. State-run media also followed standard protocol by citing a 2008 “prior criminal record” of possession of marijuana by Mr. Arreola. This is a petty offense in Colorado, punishable by a $100 fine. Common sense would further dictate that Mr. Arreola was simply a weed smoker Aurora Police randomly selected as their meth dealer to junior high kids.

Though the 2nd Amendment, the U.S. Supreme Court, and Colorado law allows Mr. Arreola to carry firearms, he does not fit the ethnic description of a legal carrier in U.S. jurisprudence. Gun laws only pertain to Euro-Americans, including tea parties, NRA people, and even gay white liberals if they so choose. Anybody else is subject to summary execution by police thugs who hate seeing “blacks” and Latinos with guns. The only thing Mr. Arreola did illegal in the eyes of that killer cop was being Latino and having a gun.

Our thoughts are with the Arreola family.