The more this Bundgaard character opens his mouth, the more we discover about his typical weakling persona. All these types do is hide behind badges and “immunity.” The true story, which we speculated correctly the night it happened, is now coming out. Ms. Ballard spoke to several news outlet in the past couple days. The police report was released to the public upon request of the Arizona Republic.

The immunity card was played to perfection in this clear case of felony assault. Bundgaard should have been immediately arrested. But the little boy who beats women went home that night. Ms. Ballard went to jail.

You can read the police report in its entirety here. Bundgaard claims Ms. Ballard was “jealous” because he was dancing with another woman. She said “you don’t love me anymore,” and hit him, according to Bundgaard. Nazi Arizona Republican Senator Russell Pearce defended Bundgaard and all other thugs who hit women. He called Bundgaard the “victim” in this ordeal. Republicans don’t equal pay for women. They do support eminent domain of women’s bodies (which they call being “pro-life”). Now they openly support male pussies who assault women.

If nothing else, we can all thank Ms. Ballard for exposing this Bundgaard for what he is.

This statement was issued through Rose, Moser, Allyn Public & Online Relations, who are representing Bundgaard, and David Leibowitz, who is representing Aubry Ballard.

“We want to jointly apologize for allowing a private matter to interrupt the public – and especially for taking up the valuable time of law enforcement. The police officers who responded deserve thanks for their sensitivity and compassion.We have cared for each other in the past; we wish the best for each other in the future. Like most relationships, ours has had some ups and downs, but it has always been based on our Christian faith and our respect for one another. With that in mind, we intend to go our separate ways now and put what happened Friday night and Saturday in the past. Obviously, we’re both tired and embarrassed. Each of us would like to reclaim some privacy. We hope the media and the public can respect that decision. Thank you for your understanding.”

The primary issue at hand is Eleventh Amendment immunity and how it must be repealed. Bundgaard needs to get the charges dismissed against Ms. Ballard. Otherwise he’s just an arrogant, little butch punk with no class whatsoever. 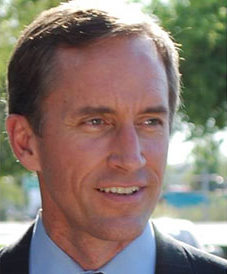 PHOENIX — Generally when cowardly pussies assault women, they go to jail. There are exception when you’re a politician or some other government official with a Constitutional “get-out-of-jail-free” card.

Arizona State Senator Scott Bundgaard, R-Peoria, and his girlfriend of seven months, Ms. Aubry Ballard, were leaving a National Kidney Foundation charity event in Phoenix Friday. Phoenix Police arrived at a median on Highway 51 just south of Cactus Road in north central Phoenix around 11:20 p.m. The couple had pulled over there. Bundgaard already pulled (or was in the process of pulling) Ms. Ballard out of the car’s driver seat. The facts get cloudy from here.

Ms. Ballard and Bundgaard were both taken into custody. But only the female victim in the domestic violence incident was arrested. Bundgaard pulled the “do you know who I am” card on police. He claimed immunity from arrest. The police obliged.

Watch a report from KTVK Channel 3.

Bundgaard was just elected to office in November and is somehow already Senate Majority Leader of Arizona. He said this case “is not about immunity.” But when police showed up, he made sure to pull the immunity card. Police still could have charged Bundgaard with felony assault. Now the only way he will face charges is via Maricopa County Attorney Bill Montgomery. We won’t insult anyone’s intelligence by suggesting this is even remotely possible. The Phoenix city attorney could presses charges as well. But the most Bundgaard could be charged with is a misdemeanor at that level. Regardless, it won’t happen.

We have written and spoken extensively about the Eleventh Amendment of the U.S. Constitution and why it must be repealed. It guarantees ABSOLUTE immunity for all judges, prosecutors, and anybody else who is “the State.” Qualified immunity is available to cops, sheriffs, probation, and detention officers.

Article IV, Part 2, Sec. 6 of the Arizona Constitution is the state version of the Eleventh Amendment. There is no transparency in government because the crooks (and woman beaters) are protected from the for-profit U.S. justice system.

Ms. Ballard is now a victim to the system. She released a statement Saturday evening which reads:

Last night was the absolute worst night of my life. This morning and the hours I spent in jail were equally horrible. To go from putting on a beautiful dress for a great date to a fundraiser to ending up on the side of a freeway? I don’t have another tear left to cry,I’m still trying to get my mind around a few things: Scott’s actions, the 17 hours I spent in jail awaiting processing, my bruises, scrapes and soreness and his statements to the media. I’m not a public figure. Nor am I someone who wants to see her private life made public. At the same time, I value my reputation. I’ve always been a strong believer in the truth. I have a lot of thinking and praying to do before I decide what to do next.

This woman, who appears to be a normal chick (based on the “beautiful dress” thing) and kind-hearted person (based on her anti-human trafficking involvement) has now experienced a reality that only those who’ve been through it believe can happen. The experience is far from over for her. A “mugshot” of Ms. Ballard is being disseminated on almost every Euro-American media story covering this. That of course destroys reputations. She spent 17 hours in a Maricopa County concentration camp. She now has to deal with this court system, barring some kind of string-pulling by Bundgaard and his Republican buddies in the state senate.

Whether Ms. Ballard punched Bundgaard or not, he obviously assaulted her too. He should have been arrested. But government always looks out for its own. Bundgaard’s mother obviously never told him NEVER put your hands on a woman unless its a life-and-death situation. IF Ms. Ballard hit him and/or if she was trying to leave him there, then BE A MAN. Take the “hit” from the woman (she’s not Laila Ali), walk away, and never speak to her again. Call cops if you’re so inclined. But what did he do to cause her to take a swing? This guy’s arrogance in declaring Ms. Ballard was “jealous” only adds to the shakiness of his story.

Bundgaard said this case is not about immunity. If that’s the case, he and his Republican cohorts can focus on repealing the Eleventh Amendment. This case is much bigger than Bundgaard,. He’s nothing but a little bitch who assaults women who hides behind the immunity card.

We wish Ms. Ballard the best in the months ahead dealing with Maricopa County courts. We will update this story if we learn more.

RELATED: Eleventh Amendment Is Unconstitutional; Must Be Repealed(8/31/2010)

One thought on “Arizona Senator Scott Bundgaard Has Girlfriend Arrested; Claims Immunity For Himself”