Regardless, she can now move on with her life. Meanwhile, in the Hope Steffey federal lawsuit, a status conference was scheduled for today (June 1), but was cancelled because of an apparently discovery dispute with Stark County Correctional Health. Since the original complaint was filed on October 19, 2007, several defendants have been added and/or removed, and the complaint has been amended four times (the fifth attempt to amend was denied by Judge David Dowd Jr. on March 4, 2009).

According to an order by Judge Dowd on October 14, 2008, the case is now on a “standby basis,” in that every two weeks, starting on May 18, 2009, unless a settlement happens within one of those time frames. We’ll try and keep you up-to-date on the proceedings.

European American (“white”) women are rarely murdered by thug cops in America, but are frequently Tasered, raped, assaulted, or sexually assaulted. Nubian (“black”) Americans first had to “win freedom” from Euro-males in 1868, with European American women at their side.

Women then had to battle for another 50 years (1919) before they were “allowed” to vote on this white male country. Since then, Euro-males who cannot and will not accept and/or accept women and “blacks” being equal humans to them join police gangs. This allows them to murder, rape, assault, and/or incarcerate any American they choose without repercussion, besides “paid administrative leave.”

Cops only have to complete a 4-6 month training course to be a licensed killer and/or rapist. The United States has become a total police state since the 1960s, after Nubian Americans and women were forced to fight for the rights they are born with. Euro-males and “Michael Steele/Booker T. Washington”-type “black” males think they own the rights to life and liberty of all “blacks” and women. Cops are never prosecuted or even remotely punished for the strict liability offenses they continually victimize Americans with.

Regular readers of The OP-NAT EYE have been following the recent assault on a 15-year-old girl by thug King County (WA) cop Paul Schene and the rape trial (and subsequent conviction) of former Creston (Iowa) police chief James Christensen and assistant chief John Sickels, after they sexually assaulted a woman at a country club. What is really scary about this police state called the USA is the fact these incidents are far from isolated. American women need to be more aware of these trends, possibly to the point of arming themselves.

Hope Steffey, a woman from Stark County, Ohio, made only ONE mistake on the night of October 20, 2006; she called the Stark County Sheriff’s Office for help; as a vast majority of Americans believe is the correct thing to do. 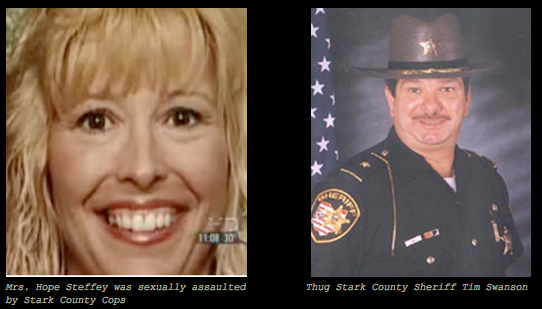 Hope was assaulted by her cousin that night, but when she called police for help, Stark County cops acted as if she was the perpetrator; the criminal. Hope described the attack as “being raped without penetration.” This video is VERY disturbing.

Stark County Sheriff Tim Swanson has the nerve to continually deny any wrongdoing by his thug cronies. He said the cops followed “proper procedure.” Stark County Sheriff’s deputies have used the excuse that women who are arrested by them are “suicidal,” which apparently gives them the right to strip them down and put their hands all over them.

All the women (apparently four more women have come forward accusing Stark County cops of stripping them for no reason as well) who have been deemed “suicidal” and subsequently stripped naked and molested, are blonde, thin, and attractive. Stark County is also named in a civil lawsuit after deputies stripped searched three girls – ages 14, 15 and 16 – on May 20, 2007 during a 15-minute walk-through the girls were ordered to do as a sentence for juvenile charges.

Apparently only 120-pound blonde women/giels are “suicidal” and never 300-plus pound women with acne problems. Swanson, along with his deputy Richard T. Gurlea Jr., and 15 others have been named in a civil lawsuit filed by Mrs. Steffey. Please sign the petition to the U.S. Attorney General, as all these Stark County cops need to be prosecuted to the fullest extent of the law.

In the case of Angela Garbarino – a Shreveport, Louisiana woman – why she was arrested or why she was in the custody of cowardly cop Wiley Willis in November 2007, does not even matter. And you’ll agree after watching the video (warning: it’s graphic).

Notice how Willis – who was fired for the incident, but is apparently now petitioning to get his job back – turns the camera off so he could attack Ms. Garbarino without any “CLEAR” video evidence existing of it. No charges were ever filed in the case. Willis said Ms. Garbarino “fell,” and that is why she was lying in a pool of her own blood with two teeth knocked out and a fractured cheek bone when the tape resumed shooting.

Willis has been accused of excessive force several other times in his career as well. Ms. Garbarino filed a federal civil suit, but as of publishing time, the current status is unknown. The online petition to have Willis prosecuted by the U.S. Attorney has now been closed, so hopefully the civil action is proceeding smoothly; as this may be the only justice Ms. Garbarino will get.

Coincidentally or otherwise, Heidi Gill was maliciously Tasered several times by thug cop Richard Kovack of the Warren (Ohio) Police Department – not too far from Stark County – on September 2, 2007. Again, this video is very graphic and difficult to watch.

Kovack was fired (but ultimately re-hired, apparently) and is now facing a federal civil lawsuit, along with the City of Warren, Warren police chief John Mandoupoulous, and Director of Public Services and Safety William D. Franklin.

The truth is, no matter how many of these incidents happen, cops are never prosecuted and convicted. Its comical that there is a large portion of the U.S. population that will not believe our country is a police state until something like this happens to them. But why should you or anybody else have to experience this third-world country type of “law enforcement?” Sensible Americans should never call police for ANYTHING.

Cops have to be treated like any other criminal on the street. Modern Penal Code (MPC) stipulates it is justifiable to defend yourself against criminal cop behavior, including using deadly force. Though the United States has no federal statute for this justified force for American citizens, there is apparently free reign for cops to do whatever they want to said citizens. The best thing for American women (and all other Americans for that matter) to do is arm themselves and be ready to shoot when these cops attack.

The old joke goes “guys who become cops were picked on a lot on high school and became cops to get back at the world.” These same insecure high school boys were also ignored and/or clowned by girls. Ladies, you are the targets of these thugs’ revenge. The stories of Hope Steffey, Angela Gargarino, and Heidi Gill should be more than enough to open your eyes.

Arm yourselves so you’re not the next one.

6 thoughts on “AMERICAN WOMEN BEWARE: Thug Cops Will Rape, Taser, and Kill You Too”