The Facebook page “Justice For Bernard Bailey” appears to have been removed in the past couple days. This could be due to the family requesting this from the administrators, or because South Carolina “authorities” threatened repercussions. The previous seems unlikely though, as it appeared many of Bailey’s relatives were part of the group.

Euro-American media have now acknowledged that the FBI is involved in the “investigation” which can strike many as good news, but not so fast. Now that Eutawville Police and SLED know federal charges could possibly be filed, it would be in their best interest to charge Combs with something/anything to let the state process run its years-long course. As we mentioned before, federal authorities will defer to the state, and there cannot be simultaneous prosecutions. This is why involuntary manslaughter charges may be in the works, if any charges at all.

Involuntary manslaughter is defined as the unintentional killing of another without malice, but with reckless disregard (criminal negligence) for the safety of others. See SC Code 16-3-60. The maximum penalty is five years in prison…which could easily be pleaded down to probation or less than 30 days in jail (or acquittal by a jury outside Orangeburg County). Involuntary manslaughter is the go-to charge for police thugs who want to cover for their killer homeboys.

Winnfield, LA police thug Scott Nugent was charged with manslaughter after savagely killing Mr. Baron “Scooter” Pikes by tasering him 14 times in 9 minutes (with audio tapes to prove it). Nugent was acquitted (and represented by TASER International lawyers) last October and no federal charges were filed. Bella Vista, AR police thug Coleman Brackney was charged with manslaughter after shooting Mr. James Patrick Ahern at least 7 times as he sat in his car. Though dash-cam video clearly showed the murder, Brackney was given a plea bargain for misdemeanor negligent homicide and served 30-days in jail last year.

Because federal authorities are now (allegedly) involved, SLED may elongate their “investigation” to extend Combs’ paid vacation, and ultimately file the slap-on-the-wrist charge. Regardless, unless federal charges are filed, Combs will not serve more than 30 days in jail…and we still believe he will not be charged at all…especially since the Facebook page for Mr. Bailey mysteriously disappeared. We’ll update again when we learn more.

UPDATED 5/16/2011: Eutawville Police Still Getting Their Lies Straight; Not Commenting On The Murder Of Bailey

While killer cop Richard Combs is enjoying his paid vacation, having beers with the good ‘ol boys in town bragging about how he murdered Mr. Bernard Bailey two weeks ago, the citizens of Eutawville continue getting the blatant “nigger treatment” from the city.

This mayor Margaret Jean Akers is playing marionette for Confederate whiteboys very well. Akers, at a city council meeting last Tuesday, May 10, referred questions about the savage slaying of Mr. Bailey, to that press release we spoke of in the original story below. Akers even went as far as thanking the cops who showed up at the scene of the murder.

That same Tuesday, more than 500 Eutawville citizens gathered at Spring Hill Baptist Church where the state NAACP made an appearance. The spokesperson for the organization basically paid lip service, telling the crowd “two wrongs don’t make a right.”

I wonder why taxpayers never complain about these kangaroo investigations by municipal corporations. Our original prediction was 4-8 weeks of paid vacation for thug Combs before this “SLED” organization releases the inevitable “findings” of this farce. You can expect some variation of the following:

“Chief Combs felt his life was in danger, which caused him to fire upon a very large man. Based on the facts presented by witnesses, this was a justified use of force. Nobody wins in this situation. This was a preventable tragedy, and the officer has to make a split-second decision. Our hearts go out to Mr. Bailey’s family. Chief Combs will be back on the job next week.”

The NAACP remains the most incredible waste of a powerful resource. They should have already directly contacted U.S. District Attorney William M. Nettles and/or the FBI. There are tangible steps the NAACP could be taking and the citizens of Eutawville are depending on them to do so. Since it is guaranteed the State of South Carolina will not press any charges against the killer cop Combs, the U.S. attorney could be preparing criminal charges against Combs for violating Mr. Bailey civil rights.

Title 18, U.S.C., Section 242, part of the original “Ku Klux Klan” Act of 1871, allows federal prosecutors to press criminal charges against persons acting under color of state law, who have violated someone’s civil rights. In the case of Bernard Bailey, his ultimate “civil” right to life was taken by a police thug. Federal prosecutors, like federal courts, will defer to the state, and allow it to come to its final conclusion first, generally before getting involved. Whatever B.S. result “SLED” puts out to justify this murder, the FBI and U.S. Attorney’s Office will be able to use it against Combs in a court of law. It is blatantly obvious, beyond a reasonable doubt, that Mr. Bailey was not a threat to this cop, was unarmed, has no criminal background to speak of, and was not a gang member…all of which the State of South Carolina will try and use in Comb’s defense (that is if the state represents him in a potential federal criminal trial).

Federal civil rights charges, when life is lost, carry a penalty of 10 years to life in prison. In extraordinary cases (which I believe the murder of Mr. Bailey qualifies), the death penalty can also be sought by federal prosecutors. Let’s just hope the NAACP uses its power and influence for this useful cause, as opposed to just lip service and appearances. We hope for the people of Eutawville that the South Carolina NAACP aren’t complete mindless drones like the Arizona NAACP, which used its power to get a local Phoenix blogger fired from his job because he wrote truthfully about rogue Tempe (AZ) Police Chief Tom Ryff. But with WALL DUE RESPECT TO CO-FOUNDER W.E.B. DUBOIS, the NAACP is what it is – an organization with a lot of white founders. The NAACP also did not have a black president of the organization until the 1970s, 60+ years after its founding. 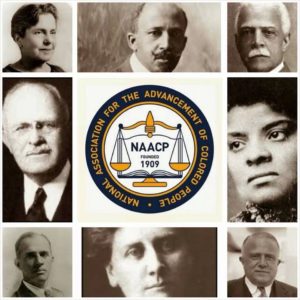 Meanwhile, it’s been reported that thug Combs was fired from a previous cop job he had with the Orangeburg County Sheriff’s Office in 2007.It’s also been reported Combs completed his police chief training only four days before murdering Mr. Bailey and had just taken over as chief in February. Most people in the town of 400 don’t even know him. We assume “SLED” will likely stretch this “investigation” as long as they can, before announcing the inevitable “justified” disposition. Most cop agencies take around 4-8 weeks (when the victim is “black”) to conjure up the lies they will feed the public to justify the murder, so we’ll stick to that timeframe.

There are now (as of publishing) 1022 followers of the Justice for Bernard Bailey page on Facebook, and 1352 signatures on the Petition to U.S. Congress for Bailey. We will update again as we learn more. 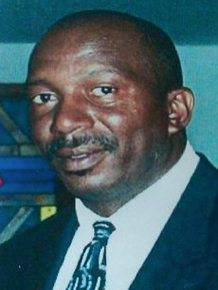 Here is yet another reason “black” people need to be armed, pursuant to the Second Amendment of the U.S. Constitution, and pro-active against these savage Confederate cops who do not even regard them as human beings.

The latest murder of an American citizen under color of state law happened in Eutawville, South Carolina – a tiny town of about 400 people in the middle of the state – 70 miles southeast of Columbia. Mr. Bernard Bailey, 54, went to pay a utility bill at the Town Hall building this past Monday, May 2.

Mr. Bailey, who had worked at Wal-Mart in nearby Summerville for at least the past 17 years, apparently asked Eutawville Police Chief Richard Combs about a traffic violation a relative of his received from Combs. That question led to thug Combs firing a gun at Mr. Bailey three times, as he sat in his pickup truck, killing him instantly. Mr. Bailey’s bullet-riddled body sat in the truck for hours while thug Combs was taken to the hospital for “treatment.” The police thug was rewarded for killing Mr. Bailey with a paid vacation, aka “paid administrative leave.”

The murder of Mr. Bailey is just one more in a continual pattern of whiteboy cops just killing “black” people because they feel like it in the Confederacy. And another man was apparently killed yesterday outside of a gun club in the same town Mr. Bailey worked. South Carolina is not only an inbred whiteboy haven, but still not very far removed from antebellum culture. State Senator Glenn McConnell, R-Charleston, was recently photographed in a Confederate Army costume with two “black” dudes dressed as slaves. 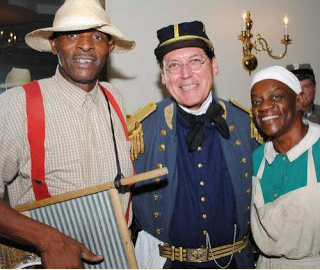 Photo from Two Seeds On A Blog.

Mr. Bailey, who was also a former corrections officer, was a beloved man in the community and inspired many people. “In the 25+ years I have known Coach Bailey, I can’t remember a single incident where he was unkind, inconsiderate or impatient with anyone,” Ms. Martha Sue Hope wrote in an online forum set up for people to leave condolences. “Bernard was an inspiration to anyone who had the privilege to meet him…always had a smile on his face and kind words to say,” wrote Tracy Ussery.

Eutawville mayor Margaret Jean Akers released a typical Confederate cop statement on Tuesday, which does not even acknowledge Mr. Bailey or his family specifically. There is some sort of kangaroo “investigation” being conducted by the South Carolina Law Enforcement Division (SLED). The predetermined, inevitable “justified” disposition of the “investigation” should be released after thug Combs finishes his four to eight week paid vacation. This Combs is obviously just some bitch inbred whiteboy who will be right back on the job in a few weeks to murder yet another American citizen.

It is ironic and a sign to the people that Eutawville just happens to be the sight of the last battle of the Revolutionary War in the Carolinas. Full and forceful revolution is the only way this genocide by the Euro-American hegemony will ever stop. Mr. Bailey was a father, a friend, and a role-model, who is now dead because some inbred cop felt like killing him.

God knows how many “black” men have been murdered and thrown into Lake Marion by savage white cops, or just one of those civilian Confederate inbreds in South Carolina. The Second Amendment of the U.S. Constitution guarantees us the right to form militias and protect our communities from murderers and rapists when the government refuses too…or if it is the government perpetuating the genocide. Arm yourselves now brothers and sisters, before it is too late.

Our thoughts are with the Bailey family.

*This is the cheesiest headline in blog history. Mr. Bailey was murdered, period. The Euro-hegemony moniker “lynched” was used simply for SEO, making it harder for “mainstream” media to ignore.