UPDATED April 20, 2015: Dautovic kills himself and his girlfriend.

UPDATED March 15, 2013: Mailander gets probation; Dautovic gets 20 months in prison. In other words, both got off easy.

Though it does not happen near enough in this country, two police thugs who brutally assaulted an American citizen will now face the music. And the OP-NAT EYE will happily eat crow on our prediction of no charges.

The two police thugs, Mersed Dautovic and John Mailander, have been charged with violating the civil rights of Mr. Octavius and obstruction of justice, according to an unsealed indictment released today by federal prosecutors. Dautovic was arrested today and remains in jail pending a bond hearing. No word on the status of Mailander as of today. We’ll update as we learn more. 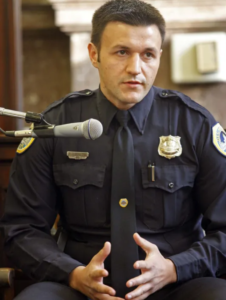 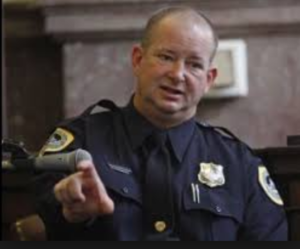 DES MOINES — This all began back on September 13, 2008 when 25-year-old Octavius Bonds was pulled over by Des Moines police thugs Mersed Dautovic and John Mailander, both on the force for less than one year. The thugs claimed Mr. Bonds “threatened” them, and proceeded to attack him with their batons. Mr. Bonds was struck 14 times in his head, back, legs, and arms, then arrested and charged with interference with an arrest and assault on a police officer. His girlfriend, Erin Evans, was also charged with interference with arrest. Mr. Bonds suffered a broken left hand, a fractured right arm, and a wound to his head that required eight staples to mend.

Mr. Bonds and Ms. Evans were acquitted of all charges at trial in March. Des Moines Police Chief Judy Bradshaw finally decided to suspend the two thugs almost three weeks after the acquittal and finally acknowledged that the force used by the thugs was excessive and inappropriate. “The force used did not match the level of resistance by Mr. Bonds and Ms. Evans,” Bradshaw said at the press conference, while announcing the two police thugs’ resignations.

Though Mr. Bonds has filed a federal lawsuit against the City of Des Moines (which he’ll likely win), the badged gangsters once again will not face any criminal charges. It is not enough for these two animals to lose their jobs. Both of them need to be charged with aggravated assault with a deadly weapon and perjury for lying about the incident in their police report. However, we all know thug cops are constitutionally-protected henchmen for a government who wants to instill fear into its citizens. They can murder, assault, rape, and kidnap anyone they want and not worry about consequences.

Protect yourselves or become a victim. Our thoughts remain with Mr. Bonds and Ms. Evans.