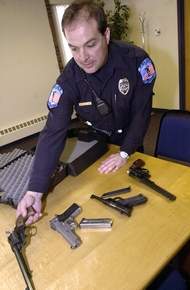 It seems every New Year’s Eve, a young black man is either murdered or assaulted by police thugs somewhere in this country (see Oscar Grant). This past celebration of the new year is no different.

It was at Jilly’s Bar on the early morning of January 1, when 26-year-old Mr. Jamek Hart apparently got a little too drunk  and started acting like drunk people do. Mr. Hart was outside the bar “flailing his arms” and “yelling” at police, according to the police report (which obviously must be taken with a grain of salt). View PDF HERE. Mr. Hart was handcuffed and placed in the back of the cop car, as the Rutland Police believed they had probable cause to arrest Mr. hart on disorderly conduct charges.

So far everything appeared to be a regular, routine, New Year’s Eve arrest in a country that glorifies alcohol. It is what happened after Mr. Hart was taken to the cop shop which caught this website’s attention, along with the ACLU’s and several concerned Vermont citizens’.

Watch a report from WPTZ Newschannel 5 in Burlington, VT.

Rutland police thug Michael Nesshoever repeatedly shot Mr. Hart, who was handcuffed and in a holding cell, with a pepperball gun.

Of course it took four months for the video to surface. Since the video has come to light, thug Nesshoever resigned from the police force. Mr. Hart has retained counsel to file civil claims against the City of Rutland. But his attorney, Mark Furlan, seems to simply want his cut of the inevitable settlement, as opposed to representing the young man. When asked about pending civil litigation, Furlan made sure to emphasize this is solely a civil case and insinuated that the acts of thug Nesshoever and the City of Rutland were not criminal.

William Sorrell, the Attorney General for the State of Vermont, said that Nesshoever will in fact be the subject of a criminal investigation which he asked the State Police to conduct. Sorrell actually seems pretty sincere in his concern for the people of Vermont when he told the Burlington Free Press, “I recognize that there may be a perception out there that there’s a problem [with] rogue cops or cops who are not trustworthy.”

We’ll see if Sorrell is truly concerned with citizens or paying them lip-service in the near future. But judging from police thuggery throughout the state of Vermont, this “investigation,” and many others are long overdue.

Vermont is the seventh-smallest state in the USA and is second only to Wyoming as being the least populated (about 620,000 people). The powers-that-be up in Vermont have obviously allowed, encouraged, and rewarded this culture of thuggery from their law enforcement. Vermont is too small and homogeneous (aka ALL white) for this to be happening.

Mr. Hart posted bail in January and the charge of disorderly conduct is still pending in Rutland County Superior Court.