How many outright lies did M. Wallace (#16814) and T. Johnson (#18490) have to tell to cover their malicious arrest and incarceration of Brian Wilkins on July 22, 2008? Like their boy Chuck Schoville said, they must always be right because they have badges and guns.

The Keystone Cops are at it again. I never really bothered looking closely at this initial report Wallace and Johnson of the Tempe Police placed on the internet for all to see.<<UPDATE Feb 3, 2009: Predictably, The City of Tempe has now removed all remnants of this page from its website and all web searches. Here is the screenshot:>> 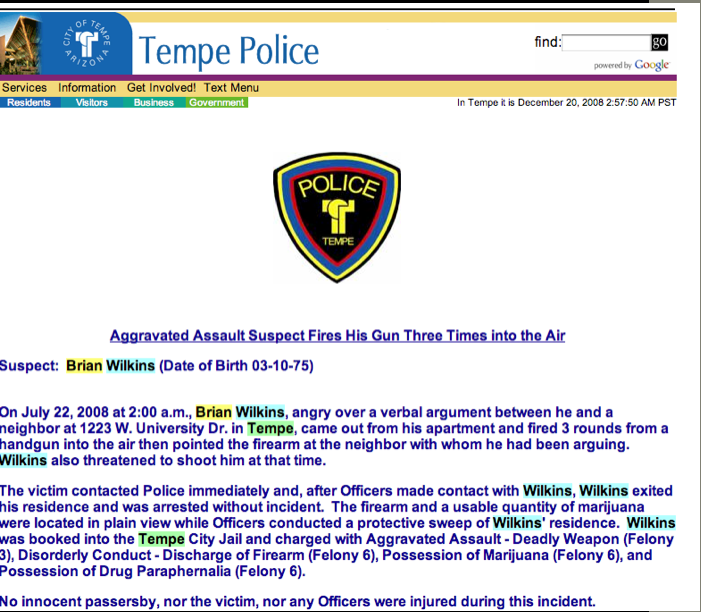 <<AND HERE IS WHAT THE POLICE REPORT SAYS:

Thus the public report says Wood called cops immediately. The Tempe Police report wondered why he “waited so long” to call police. One interesting point was the fact they were correct about me firing three shots in the air when I finally got the criminal alleged “victim” out of my place. The police report says I fired one shot, went back into my apartment, then came back out and fired two more. I supposedly held a gun to the criminal alleged victim’s head for the fun of it, according to Tempe Police.

These two clowns got their lies mixed up. They tried telling the public one story, while writing an entirely different one in their official report. The police report says cops Wallace and Johnson specifically asked the criminal alleged victim why he waited so long to call police. The alleged “witness” said everything happened between 11pm-and-midnight that July 21/22 night. Police arrived around 2:30 a.m. Yet in Tempe’s “Keen” observation, they report “the [alleged] ‘victim’ contacted Police IMMEDIATELY.”

So which is it boys? The criminal alleged “victim” also told them I came outside pointing a gun at his head around 2:00 a.m. Maybe they’ll pull a Mark Fuhrman and plead the Fifth when questioned about this.