This day corresponds with Thursday, July 24. I did not have a chance to get out of there until July 29, the next court date. My new job at the University of Phoenix was to start Monday, July 28 and all I could think about was if I was going to be able to make it there.

Though I was more tired than I’d probably ever been in my life, I only slept solidly for a couple of hours. Not only was that cell approaching 55 degrees, but the air conditioning vent was only 3 or 4 feet in front of my face, being on that top bunk. All I could do is lay there and think: “I should have went and visited my friend in Kansas City and this would never have happened”; “Why did I allow a radical in my life whom I knew was a felon and had said things in the past that were clear warning signs?”; “what did I do to make those cops go rogue like they did?”

A narrow beam of light shined through the cell door window for a few minutes before the heavy metal door opened to “let me out and play.” I would learn, unless the “pod” was on “lock-down,” the door would open every morning around 6 a.m. I didn’t get up and leave the cell, as I really didn’t know where to go or what to do. It wasn’t until that distorted, loud voice over that intercom said “lock down for CHOW” that I would next leave the cell.

I went to the back of the line, as there were already several people lined up, but I soon learned I had to go to the front of the line since they hand out “chow” in order of the “cell” you are in. The food items in the plastic bag, which I learned were called “ladmo bags,” named after some Phoenix-area children’s variety show I had never heard of up to that point, were similar to what was in the bags at that other jail. Except now there was milk instead of the punch and there was meat for the bread instead of peanut butter.

I wanted to sit by one of the European American guys I came over from the other jail with, but was soon directed to go sit at the “kinfolks” table, which was what “blacks” were called in there. The separate races had to sit at separate tables and this was egged on by the “D.O.’s” asking “which race has cleaning duties this week?” People who could not afford “commissory,” an order form you fill out to get a variety of junk food to supplement or replace the jail-issued food, would do the cleaning in the pod and get “items” (a honey bun, a bag of chips, etc.) as pay.

It was obvious to notice several tables full of Latinos, two full of “blacks,” but only one for European Americans in a county where 66 percent of the population is European. But then again, I thought, this is the United States Justice System. I sat down and shook hands with Monster, Steve, Bates, Richie Rich, Black, and K-Dog. Train and Cali were at the other table. “I’m about to tear into this turkey. I’m starving,” I said to my new “kinfolks.” Everybody started laughing, which made me pause right before I was about to bite into a sandwich. “Man, that’s emu; that’s not turkey,” Steve said. I learned emu was a really ugly bird that looks like an ostrich. 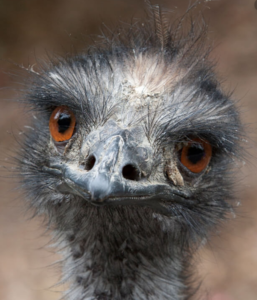 When I looked at the “meat,” which another guy, Walter, perfectly described as looking like Freddie Krueger’s skin, I completely lost my appetite and gave it away. All I ate out of the bag were the two plums. Because of my periodic lactose intolerance, I didn’t even drink the milk.

The conversation, I must admit, was pretty interesting. Not only did I learn I was now a “kinfolk,” but the whiteboys were called “woods” which was short for peckerwoods. I thought this would be insulting, but as I’ve always maintained, there is no true, insulting slur for Europeans; and they willingly and proudly called themselves “woods.” The Latinos who were American citizens were the Chicanos, which made sense. A new term I heard while in there was “pisa” (pronounced PIE-suh), which was what illegal immigrant Latinos were called. Each race had a “head” or leader who represented them at these “pod meetings” which I wouldn’t see for a while.

But then the conversation turned to the man who administered the place we were in: Sheriff Joe Arpaio. “That fool can’t carry a gun because he is a convicted felon,” one of the guys said. I was told a story that Arpaio, the self-proclaimed “America’s Toughest Sheriff” was arrested in New Mexico with millions of dollars in the trunk of his car he had gotten from a drug bust. I heard this same story a few times, though sometimes it took place in California. For one, I never knew Arpaio didn’t carry a gun, and I’m not sure what to believe with this conviction. When I got out of there, I searched for documentation of this arrest, but could not find any. But being the guy is a former DEA agent and omnipotent in this county, I wouldn’t think it’d be tough to cover-up or erase all together from his record.

Later on that day, when “chow” was called again, I got to see the “slop” for the first time. It was supposed to be your jail-issued meal for the night, but if I couldn’t eat that emu, I definitely was not going to eat something that looked like someone vomited in a tray and served it as a meal. I would eat only an orange that night. That “slop” is what would be served everyday between 4pm-6pm as your second and final meal of each day.

I soon realized I knew nobody’s phone number by heart and even if I did, I’m such a loner, whom would I call anyway? My “celly” Mario had already gone to sleep for the night and after about 10 games of chess, I did not want to be down in that area with all those people anymore. Though I wanted to climb up to that top bunk and lie down, I could not because of my broken hand. I got a few sheets of paper and a pencil from Train and started writing at the little desk in there. I was tired, cold, and sad. This would be the fourth night I’d be in this system of perpetual slavery; this would be the first night I would cry for hours. Was this going to be my life? Was I now a statistic? “LOCK DOWN FOR THE NIGHT,” the intercom said. I would sit on the concrete stool, dozing off occasionally; crying frequently.