This comes one day after she publicly criticized Portland Mayor Sam Adams. The drama continues.

I’ll believe it when I see it (though Chief Ken Farmer of the Bella Vista, AR Police Dept. should at least pay attention to this). Grand jury proceedings have always been closed to the public and the transcripts subsequently deemed “confidential,” which is why its hard for rational Americans to trust such proceedings. However, Saltzman said, in a letter to the D.A. that this was his wish. Read the letter in PDF format here.

I also have a hard time believing Multnomah County District Attorney Michael Schrunk has had some sort of epiphany over the past week. He has never commenced an action like this in any of the other murders at the hands of Portland thug cops. Rumor has it he specifically let killer cop Scott McCollister off after he murdered Ms. Kendra James back in May of 2003. The reason: McCollister’s father worked for Schrunk’s office for a period of time.

If Schrunk really wanted this proceeding against current killer cop Ronald Frashour to be public, he could simply hold a pre-trial hearing to determine if enough evidence exists for murder or manslaughter charges (which there obviously is, but the word “cop” means “constitutionally protected”). 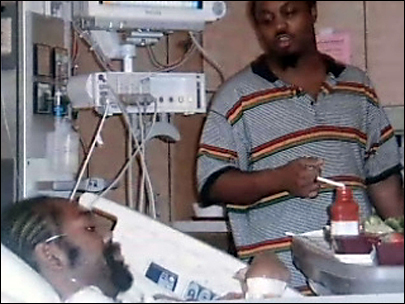 Scott Westerman, the head of the Portland Police Union, summed this case up best, saying, “basically, we shot an unarmed black guy running away from us.”

The tale Portland Police are using is the proverbial “suicide by cop” excuse, which is becoming much more common to justify thug cop savagery. A friend of Mr. Campbell called police because Mr. Campbell was despondent after learning his brother, Mr. Timothy Douglass, had died earlier in the day at a Portland hospital, of unspecified health problems. Mr. Campbell was inside an apartment with three children and a woman, and possessed a gun, like many other Americans do. Mr. Campbell did not threatened anyone with his firearm.

The woman was outside of the apartment when police arrived and the children came out about an hour later, completely unharmed as expected. Mr. Campbell then came out of the apartment with his hands behind his head. Police say he “refused to follow orders” by not putting his hands in the air, which prompted police thug Ryan Lewton to fire several bean-bag shots at Mr. Campbell. Obviously hurt by the shots, Mr. Campbell instinctively moved his hands to where he was shot, which was enough to prompt thug Frashour to fire one shot from an assault rifle into Mr. Campbell’s back, killing him instantly. His gun was later found in a closet.

Frashour said he “felt threatened” by Mr. Campbell tending to the bean-bag shots.

Several witnesses have said Mr. Campbell cooperated with every order, but was murdered anyway. The killer cop and his accomplice were both rewarded with paid vacations.

We have previously written about Multnomah County District Attorney Michael Shrunk; the guy who threatened to prosecute a Portland woman on frivolous charges if she pursued a federal lawsuit against Portland Police thugs who assaulted her. He never has and never will charge a murdering cop with any crimes, and the same should be expected here.

This same thug Frashour who murdered Mr. Campbell was named in a 2007 federal lawsuit for using a Taser on journalist Frank Waterhouse, who was filming Portland police as they searched a friend’s yard. Frashour claimed in his police report that Mr. Waterhouse’s camera could be used as “a weapon.” As one independent police videographer put it, “the camera IS a weapon; a weapon against tyranny, oppression, and lies.”

It should be disturbing to all Americans that not only are police thugs in Portland given the green light to murder American citizens and not be punished, but they specifically target black Americans who are unarmed. However, copsuckers in Portland, similar to those in neighboring Washington State, continue to praise the killers and criminalize the victims.

Our thoughts are with the Campbell family, who lost two young men in one day; one unnecessarily as a result of yet another U.S. government-sanctioned murder.