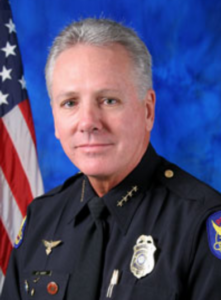 As news broke that budget problems will cause the Phoenix Police Department to eliminate 350 jobs, mostly cops on the street, the Chief/Public Safety Manager Jack Harris has the dirty nerve to act like his double-dipping salary and the salaries of several “sergeants” are not partly to blame.

Harris is best described by the very informative website badphoenixcops.com, as nothing more than “a civilian with a gun.” It should also be noted that Harris said department executives and middle management have all agreed to take 7 percent paycuts to try and save some jobs, but he fails to disclose anything about himself taking a paycut…which would be the most obvious move that should be made.

First, watch how Harris tries to worm his way around direct questions about his double salary for doing one CIVILIAN job. From KPHO CBS 5 in Phoenix.

This clip is referring to Harris retiring as Phoenix Police “Chief” back on January 17, 2007, taking a one month vacation, then returning to the Phoenix Police Department on February 17, 2007 doing the exact same job, but now with a different title (“Public Safety Manager”). The Phoenix City Council created this new position for Harris two months before he retired, so that he could collect two salaries for one job. Harris currently earns $193,000 per year as “safety manager” and gets another $90,000 per year from a retirement pension (don’t you have to be “retired” to get a pension?).

This “double dipping” is the subject of a lawsuit filed by Judicial Watch, a Washington D.C.-based watchdog group, on behalf of five taxpayers (some of whom are police officers), in the Maricopa County Superior Court back in October.

The case is currently pending, with Harris and the Phoenix Pension Board filing answers to the complaint on January 6. Whether this “pension” money has already been allocated or not, the fact Harris is, with a straight face, collecting two paychecks at a time when massive job cuts are being bandied by city council, tells you all you need to know about this guy.

It was also recently reported that at least 87 Phoenix Police “sergeants” earn more than $100,000 per year; to which Harris replied, “the community should be proud (city leaders) are compensating their leadership fairly and getting that bang for their buck.” But based on community reaction, I think they would rather have a few more cops on the street than a bunch of high-paid corrupt officials sitting behind desks.

Police and their apologists can save us all the “our job is dangerous…we deserve high pay” mumbo-jumbo. Police work is not even in the top 10 of the most dangerous jobs in America, according to Forbes magazine; in a list that includes cab drivers, roofers, loggers, and fishermen. In other words, $100,000 is way too much for some pencil-pushing cop who probably has never even executing a felony arrest (similar to how our “county attorney” Andrew Thomas has never tried a felony case in his life…’tis Arizona for you).

For the sake of sheer integrity and the Phoenix Police’s alleged commitment to public safety, each of these sergeants needs to take a $20,000 paycut; and Harris needs to forfeit 40 percent of his total salary (about $113,000). This would create a pool of $1.85 million, which would be enough to keep 40 or so cops on the street at a yearly salary of $45,000; a paycheck many would gladly accept.

The city has named several special units which will be eliminated, but failed to mention the TASK Unit, which is something only “black” Phoenix citizens are aware of. Every Tuesday and Thursday night, Phoenix Police act as the Joe Arpaio/Maricopa County Sheriff’s Office, doing “sweeps” through predominately “black” neighborhoods (south and west Phoenix), arresting, harrassing, questioning, and taking photos of as many “black” motorists as possible. Even if the motorists are not arrested, Phoenix Police take the victim’s pictures and store them in a database. In other words, Arpaio is to “Mexicans,” as Phoenix Police is to “blacks.” “Black” residents of Phoenix refer to these Tuesdays and Thursdays as “task night.”

Eliminating (and asking the Department of Justice to investigate) this obviously illegal and obviously inbred unit, and firing all the cops who were involved in it would easily save the city another $1.85 million and, again, be enough to fund at least 40 more cops for street duty. Phoenix Police, of course, will deny there is a such thing as “task night.”

Instead, Harris will continue wasting tax dollars not only on his own salary, but those of high-paid pencil pushers. Harris has also wasted tens of thousands trying to persecute the author of badphoenixcops.com, Jeff Pataky, because Mr. Pataky has revealed so much malfeasance by Harris and his cohorts. The indictment, however, has nothing to do with Mr. Pataky’s blog (or the obviously illegal search warrant Phoenix Police executed on Mr. Pataky which was signed by thug Maricopa County judge Gary Donahoe…Phoenix Police took all of Mr. Pataky’s laptops, hard drive, printers, etc.). Phoenix Police are trying to get him on “false swearing” charges in connection with his divorce from his ex-wife.

Harris and the man who allows him to collect two paychecks, Mayor Phil Gordon, should both step down, as they are the two constants which have led to this fiscal crisis. Corrupt sheriffs, judges, cops, mayors…this is our life as Arizona citizens.